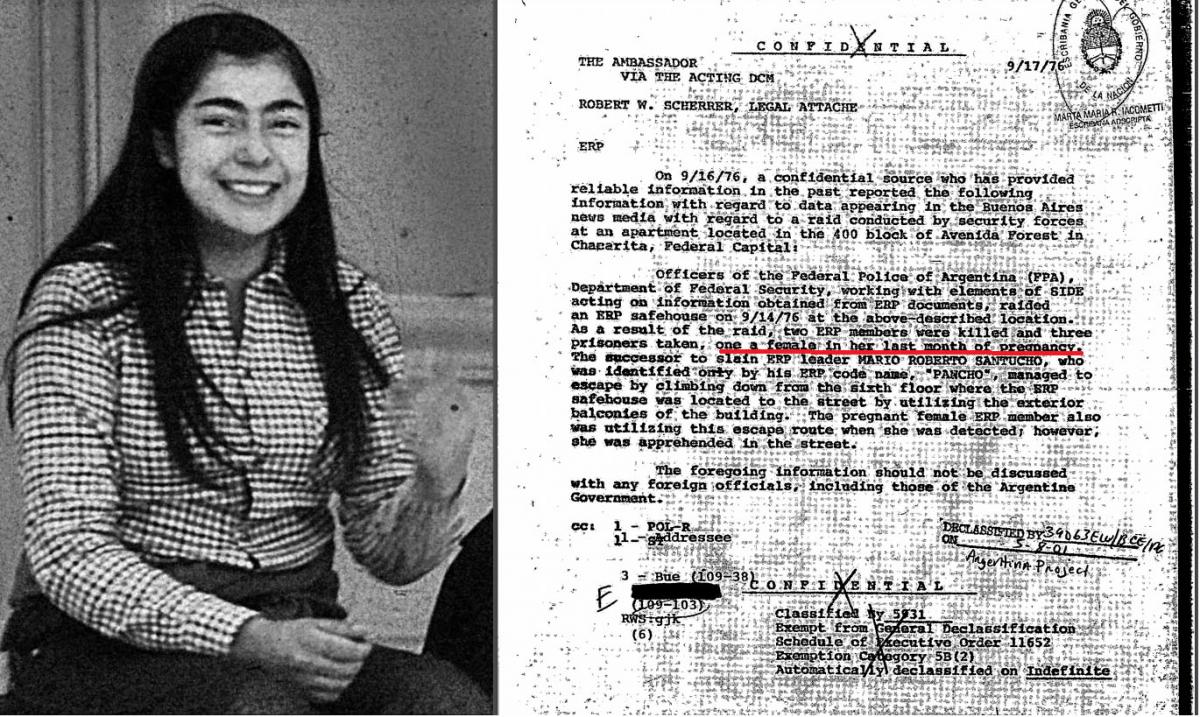 Documents like this one pertaining to the fate of Ana Maria Pérez will be among those in the upcoming release. Photo courtesy of Berta Elvira Sanchez.

Documents Release [Tranche I]:
Office of the Director of National Intelligence, August 8, 2016

Washington D.C., March 24, 2019 - On the 43rd anniversary of the military coup in Argentina, the Argentine government of Mauricio Macri has announced that the Trump Administration will provide “the largest delivery of declassified documents, in size and file quality, to another nation”—formerly secret U.S. records relating to human rights abuses committed during the military dictatorship between 1976 and 1983. The official transfer of the records is planned for mid-April during a visit by Argentina’s minister of justice, Germán Garavano, to Washington D.C.

“With great expectations, Argentina awaits this documentation which will provide valuable support for the process of truth, justice and memory,” noted a statement released today by the Argentine Ministry of Foreign Affairs.

“This is the largest amount of information that the United States has ever transferred to another country,” President Macri tweeted today. “These documents will play a fundamental role in advancing justice for still unresolved issues of the past, one of the darkest periods of Argentine history.”

Osorio said that the National Security Archive would analyze the documentation and post a selection of the most significant and revealing records after the U.S. transferred the documents to Argentina.

In anticipation of the final release of records, the National Security Archive today posted a sampling of previously declassified, but heavily redacted, FBI records which reflect the potential value of the forthcoming declassification. Among them are detailed reports from the FBI’s legal attaché in Buenos Aires on repressive operations conducted by military security agents during the dictatorship. The declassification of similar records, according to Osorio, could provide evidence for victims, investigators, prosecutors and judges to pursue still unresolved human rights crimes in Argentina.

This fully excised two-page FBI memorandum from Legal Attaché Robert Scherrer to U.S. Ambassador Robert Hill likely contains information on Roberto Quieto’s capture and disappearance. Quieto was a Montonero leader who was disappeared in December of 1975. A couple of cables released by the Department of State in 2002 account for Quieto’s detention by Argentine security forces. But no documents released so far offer a hint as to his eventual fate. This is one of the documents among three heavily excised provided by the FBI to Argentine prosecutors in 2002. The upcoming declassification should reveal currently excised information from this cable and other cables related to the case.

A Legal Attaché cable reports that “…at approximately 1:30 A.M., August 11, 1976… units of the Argentine Army Intelligence Service operating with the Buenos Aires Provincial Police …raided an apartment in La Lucila, Buenos Aires, and arrested a female occupant of the first floor, whose parents reside in the same apartment building on the sixth floor… the security forces withdrew from the area at approximately 4:00 A.M. August 11, 1976 after having carried out their mission.”

According to testimonies by the father and sister of Selma Ocampo, she and a friend, Inés Nocetti, were asleep when at around two in the morning men in plain clothes and in uniform surrounded their block. Selma resisted arrest. In the next apartment, an Argentine Navy officer refused to open his door to them and called a security detachment. The raiding police and intelligence agents also tried to enter the Ocampo’s parent’s apartment, but they refused as well. The agents eventually forced their way into Selma’s apartment. However, the security personnel called by the Navy officer arrived and, in the confusion, engaged in a shootout with the raiding agents before they could identify each other and cease fire. Selma Ocampo and Inés Nocetti disappeared in this incident and were eventually killed by Argentine security forces.

This declassified FBI cable from Legal Attaché Robert Scherrer to Ambassador Hill cites information from a confidential source shedding light on a recent security operation reported by the Buenos Aires news media. The source revealed that the Federal Police of Argentina (FPA), in conjunction with SIDE, raided an ERP safehouse in Buenos Aires on September 14th, 1976. "Two ERP members were killed, and three prisoners were taken, one a female in the last month of her pregnancy." The pregnant woman tried to escape from the 6th floor apartment using exterior balconies but “was apprehended in the street." The cable ends warning that “The foregoing information should not be discussed with any foreign officials, including those of the Argentine government.”

The apprehended woman was a nine-month pregnant Ana María del Carmen Pérez de Gaya, a member of the ERP whose code name was “Vicky.” She was taken to the Clandestine Detention Center Automotores Orletti and disappeared. Her remains, and those of her unborn child, were later discovered in a cement-filled drum.

*These documents were identified and described with the help of
undergraduate students from the College of William & Mary as part of a
research internship led by Professor Silvia Tandeciarz and assisted by
Johanna Weech. We would like to acknowledge the following students:
Arianna Asfari, Emily Jackson, Pedro Ramos, Isabella Dickens-Bowman,
and Johanna Weech (Spring 2018); Lauren Bauer, Grayson Cox, Emily Kate
Earls, Brianna Ferebee, Molly Keck, Megan Leu, and Johanna Weech
(Spring 2019).

"This is the largest amount of information that the United States has ever transferred to another country”
President Mauricio Macri’s Twitter account
March 24, 2019

“On April 12, I will receive, in the National Archives building of
Washington DC, the largest delivery of declassified documents related
to the last civic-military dictatorship.”
Minister of Justice and Human Rights Germán Garavano ’s Twitter account
March 24, 2019