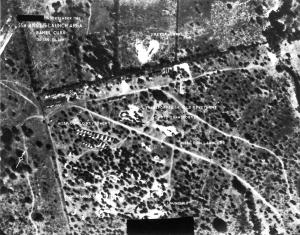 In the middle of the Soviet military buildup in Cuba, just three days (we now know) after the freighter Poltava had brought the second shipment of medium range ballistic missiles, the top intelligence board in the U.S. told policymakers that no Soviet missiles were coming— a now legendary intelligence failure.

The Special National Intelligence Estimate on September 19, 1962, pronounced that installing ballistic missiles in Cuba “would be incompatible with Soviet practice to date and with Soviet policy as we presently estimate it. It would indicate a far greater willingness to increase the level of risk in US-Soviet relations than the USSR has displayed thus far…”

The CIA director, John McCone, disagreed, but he was on his honeymoon in France and all the other intelligence chiefs, including McCone’s deputy, Gen. Marshall Carter, voted in favor of the SNIE. McCone warned about missiles in his cables to Carter on September 7, 10, 13, 16, and finally in a rebuttal to the SNIE on September 20: “as an alternative I can see that an offensive Soviet base in Cuba will provide Soviets with most important and effective trading position in connection with all other critical areas and hence they might take unexpected risks in order to establish such a position.” McCone was thinking about Berlin, but ultimately the trade was for U.S. Jupiter missiles in Turkey and Italy. 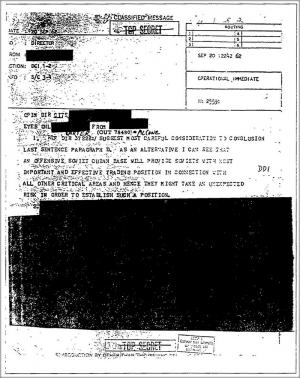 One of the SNIE’s authors, Sherman Kent, then Assistant Director for National Estimates, later defended the SNIE, writing that “no estimating process can be expected to divine exactly when the enemy is about to make a dramatically wrong decision. We were not brought up to underestimate our enemies.” He then added, “We could not believe that Khrushchev could make such a mistake.” (See Michael Douglas Smith, “The Perils of Analysis,” Studies in Intelligence, Vol. 51, No.3, 2007).

More persuasively, former CIA analyst and U.S. ambassador Raymond Garthoff defends the SNIE by arguing that accurate eyewitness reports on the missiles were not yet in hand until after September 19, while false reports abounded. Similarly, in their edited volume on Intelligence and the Cuban Missile Crisis (Frank Cass, 1998), the scholars James Blight and David Welch criticize McCone as right for the wrong reasons: McCone had a bureaucratic reason to worry the SAMs would shut down his eyes over Cuba, plus the Soviets had deployed SAMs elsewhere without MRBMs, so Cuba was not unique. And McCone continued to think, after the missiles were withdrawn, that the SAMs in Cuba just meant the missiles would be coming back.

Perhaps because the SNIE was wrong about Soviet intentions, policymakers missed its more accurate conclusions about Soviet motivations. The SNIE rightfully emphasizes the strong Soviet commitment to defend the Cuban regime “against what the Cubans and the Soviets conceive to be a danger that the US may attempt by one means or another to overthrow it.” Yet it took several decades for Kennedy’s advisers to concede that their own policies, including the reckless Mongoose operations, had raised the sense of threat and the "level of risk."