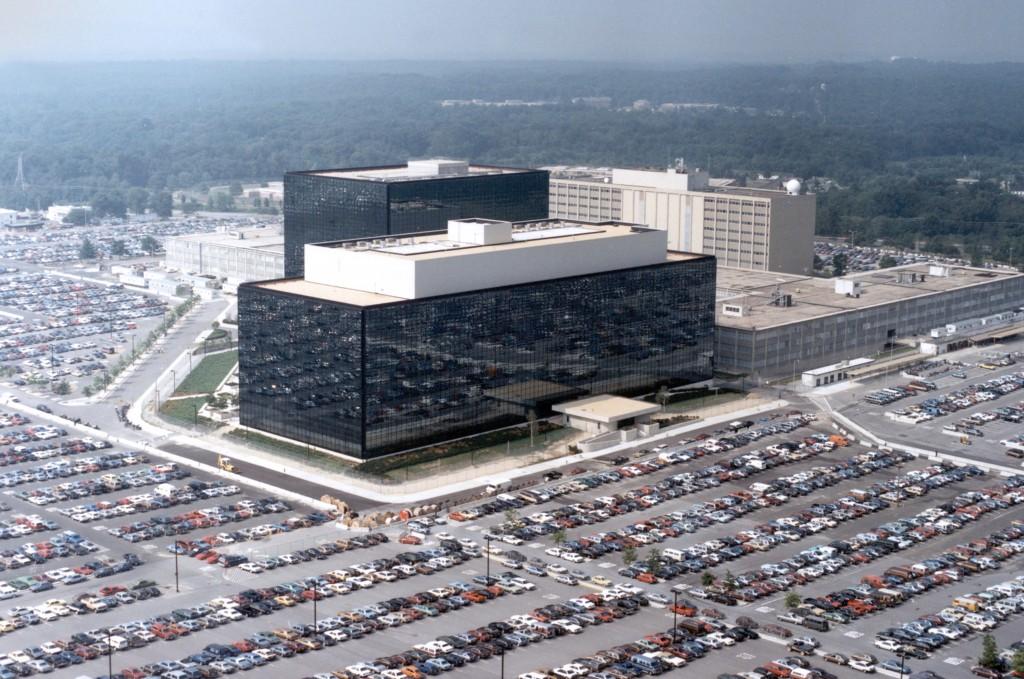 Our present understanding of how USCYBERCOM conducts operations in cyberspace comes either through anecdotal examples such as JTF-ARES/OPERATION GLOWING SYMPHONY or through broad doctrine as communicated in publications like JP 3-12 Cyberspace Operations. Little has been revealed about processes linking broad doctrine and strategy to tactical operations. Today the National Security Archive publishes a collection of documents obtained via FOIA declassification regarding the process of building the Cyber Mission Force and Joint Force Headquarters – Cyber under USCYBERCOM. These documents trace the development of the US military’s first acknowledged offensive cyber force, outline the mission's essential tasks and key operational processes USCYBERCOM elements are required to master, discuss the impact of US government shutdowns on the USCYBERCOM training process, and demonstrate the doctrinal roots of cyberspace tasking and targeting in fire support and airpower doctrine.

The CMF consists of three types of teams. The defensive component of USCYBERCOM’s mission is performed by the Cyber National Mission Force, tasked with protecting civilian networks and infrastructure, and the Cyber Protection Force which defends Department of Defense networks. Offensive operations, under the direction of a service-specific Joint Force Headquarters – Cyberspace (JFHQ-C) in support of combatant commanders, are conducted by the Cyber Combat Mission Force. 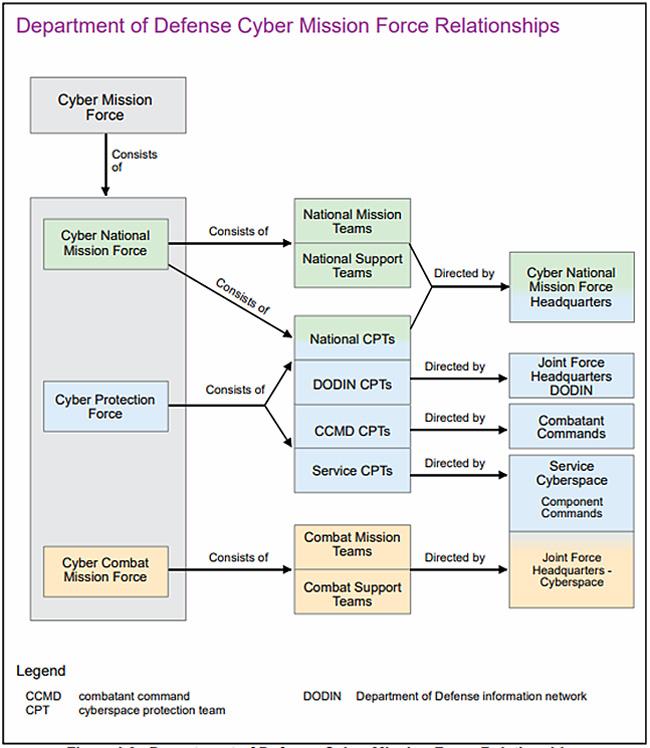 In March of 2013 the first task order (TASKORD) was issued with instructions for developing the CMF teams through the end of fiscal year (FY) 2013. This document, designated TASKORD 13-0244 [Document 1], ordered the service components to begin the process of building the teams, provided guidance for their integration, and designated the requirements for IOC (4.B.1) and FOC (4.B.2) thresholds.

Two months after TASKORD 13-0244 was issued, a fragmentary order (FRAGORD) was issued to modify and add sections related to service component assignments and command and control. Service cyber components received updated interim assignments to support combatant commands: Army Cyber was tasked to CENTCOM, AFRICOM, and NORTHCOM; Air Force Cyber to STRATCOM and EUCOM; Navy Cyber to PACOM and SOUTHCOM; and Marine Cyber to SOCOM. TASKORD 13-0244 was followed by TASKORD 13-0747 [Document 4] for FY 2014, which set as a desired end state the first fully operationally capable CMF teams. TASKORD 15-0124 [Document 7] for FY 2015 and FY 2016 orders the training of a further 34 and 28 teams, respectively.

In late October 2013 the USCYBERCOM component commanders convened for a series of update briefings [Document 5]. A CMF training timeline in the presentation showed the phases of the build, staff, and individual training sessions, and key milestones: 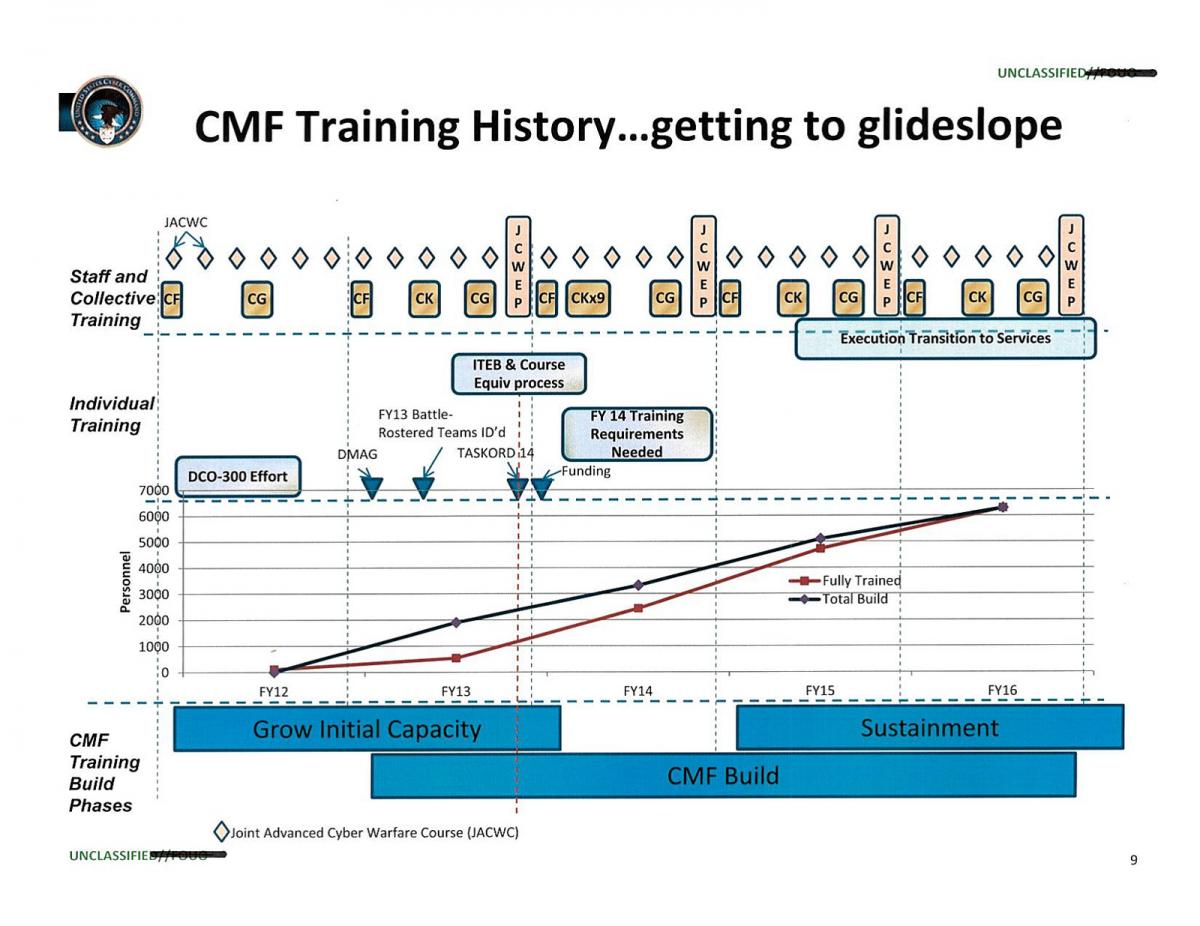 Challenges in the training process were discussed, including funding, retention, and the defining of standards: 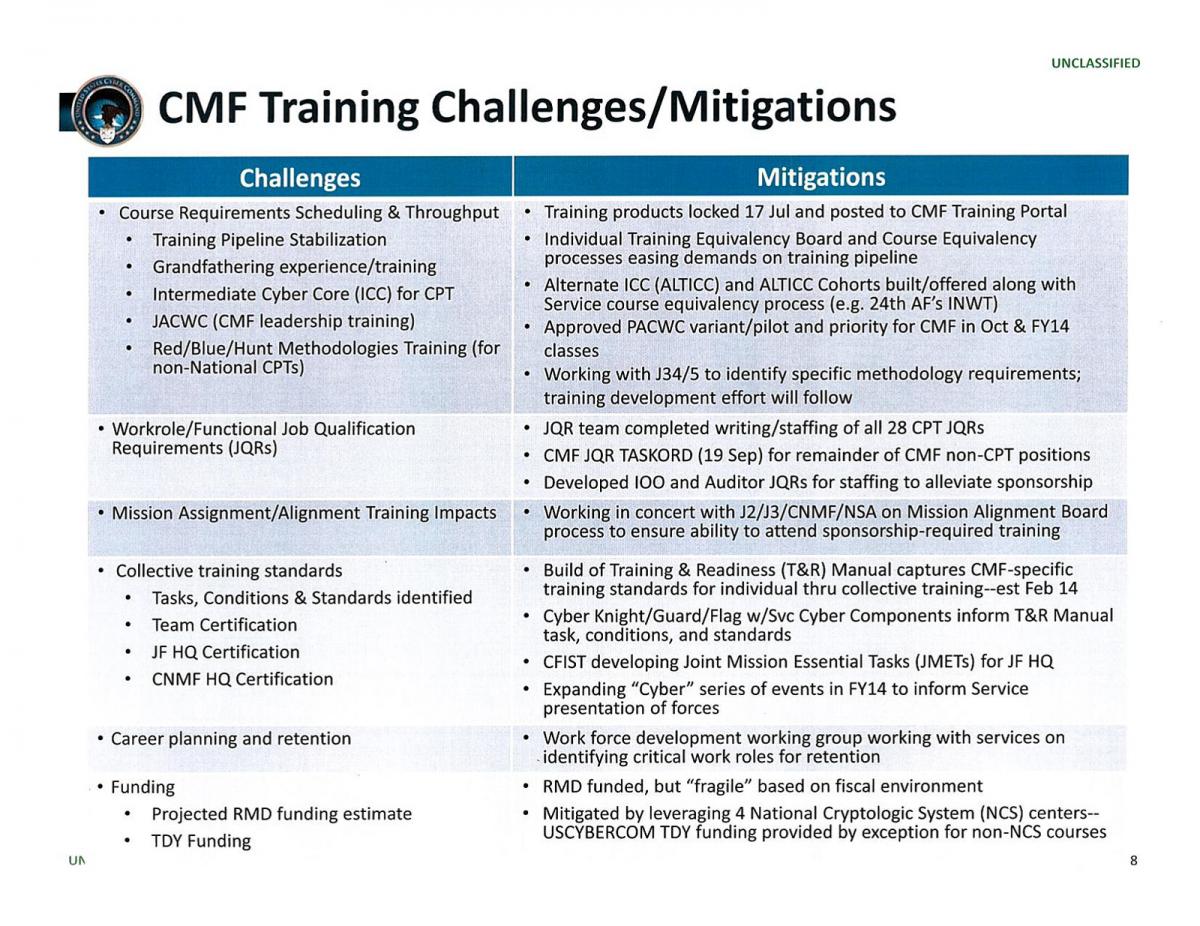 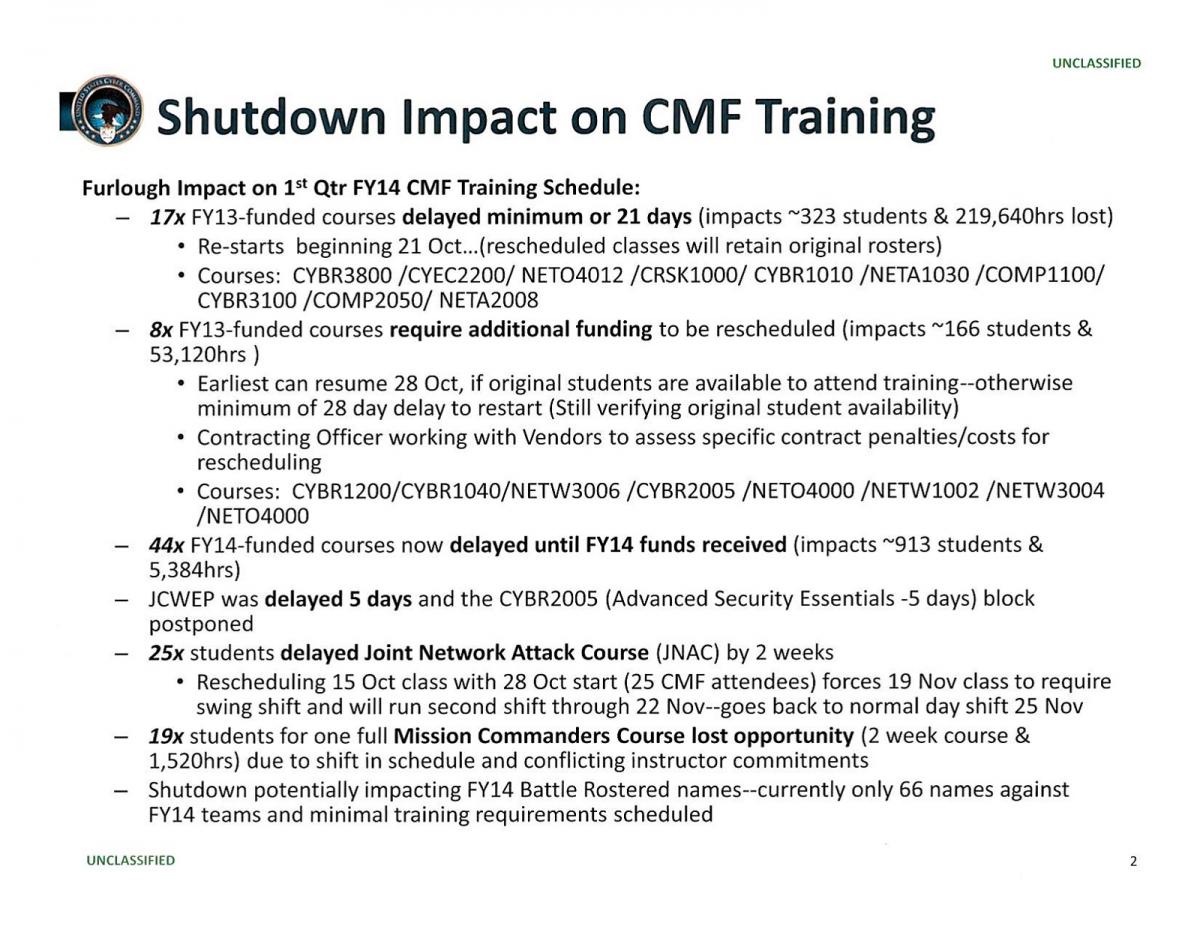 In October of 2013 the Deputy Commander of USCYBERCOM, Marine Lieutenant General Jon Davis, issued a memorandum [Document 3] to the commanders of the service cyberspace components which defined the IOC threshold for each JFHQ-C. Referencing the 2013 edition of JP 3-12 and a slide presentation on JFHQ-C certification [Document 2], the memorandum states that a JFHQ-C which has reached IOC is able to “execute the six mission essential tasks with associated mission critical functions” and “integrate with the seven critical US Cyber Command (USCYBERCOM) operational processes.” 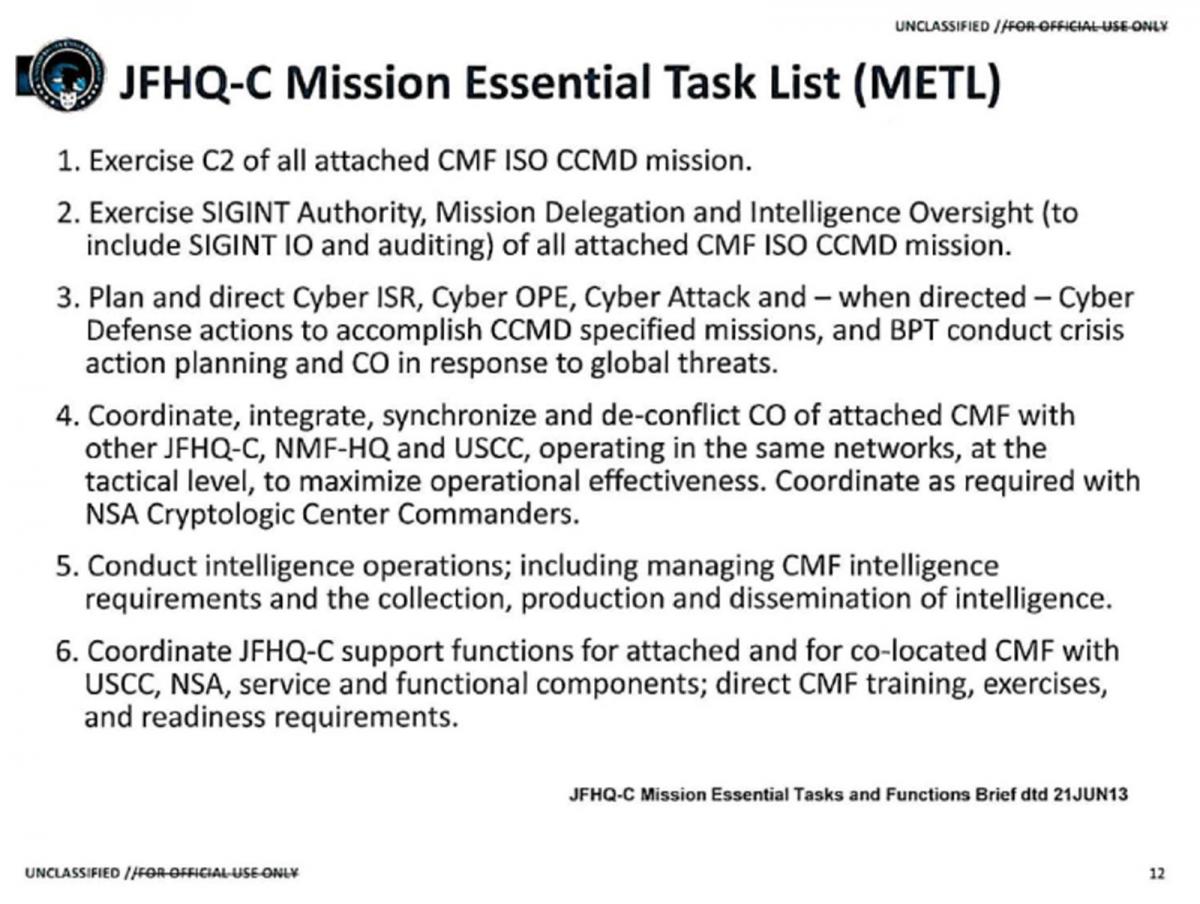 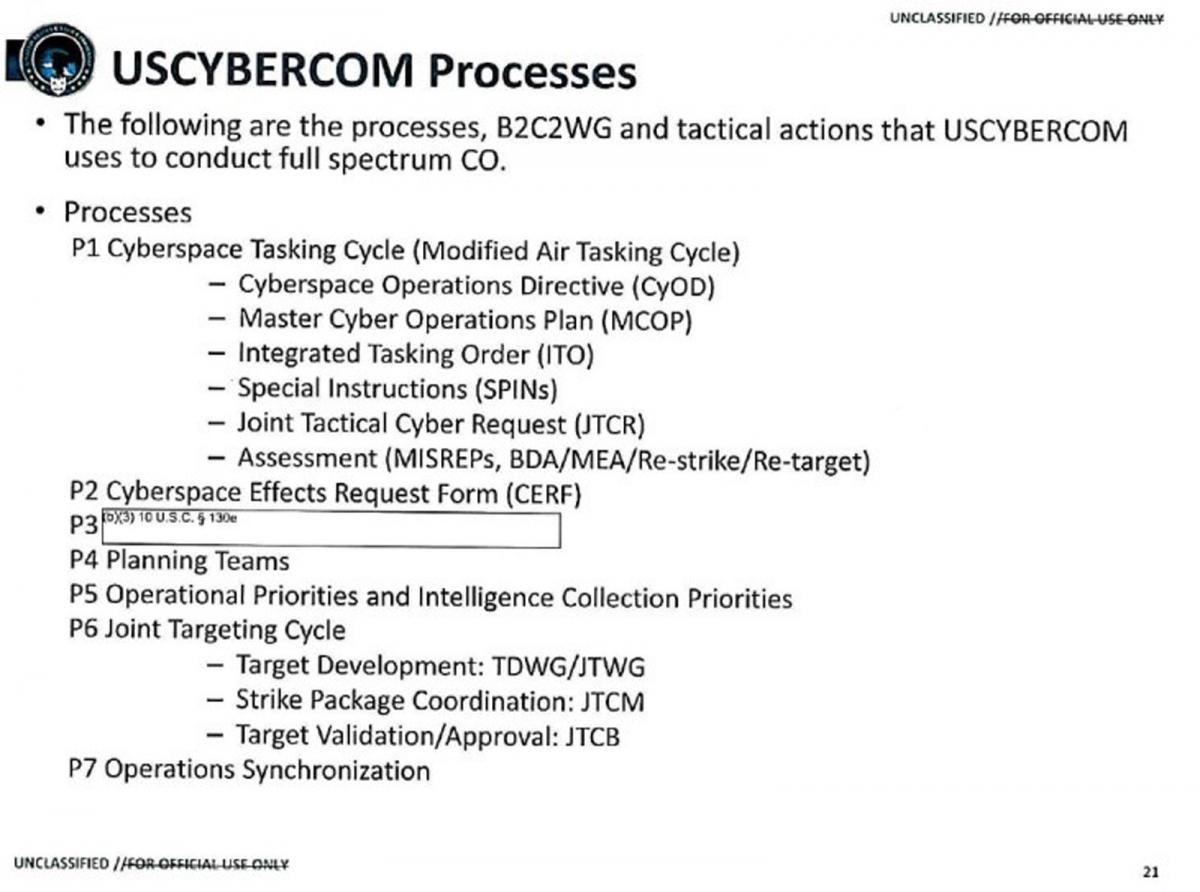 That the Cyberspace Tasking Cycle was adapted from the Air Tasking Cycle confirms previous analysis by The National Security Archive drawn from USCYBERCOM’s campaign against ISIS that processes used by the US military for cyberspace operations are rooted in kinetic operations.

After reaching IOC, a JFHQ-C went through a series of increasingly complex exercises and levels of training before receiving FOC certification in a manner very similar to the CMF training process. 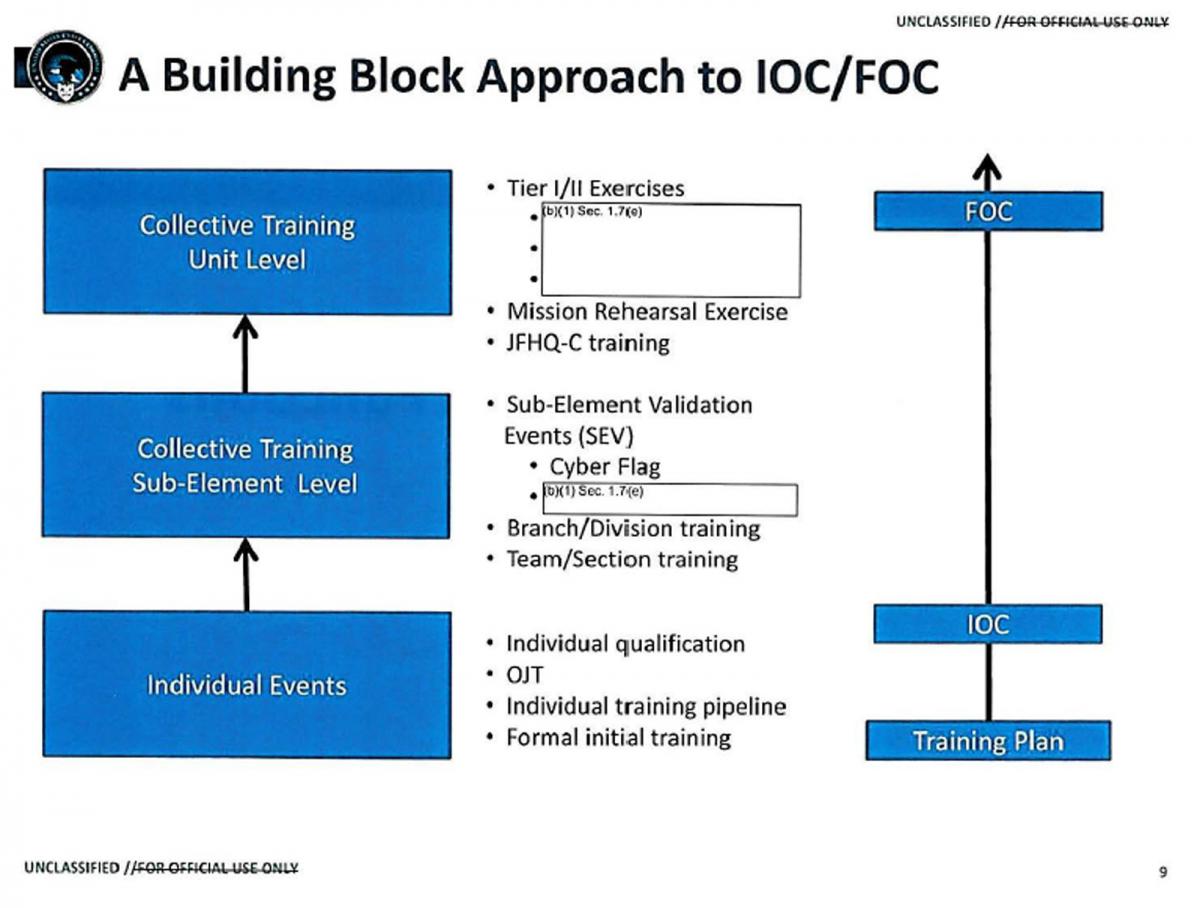 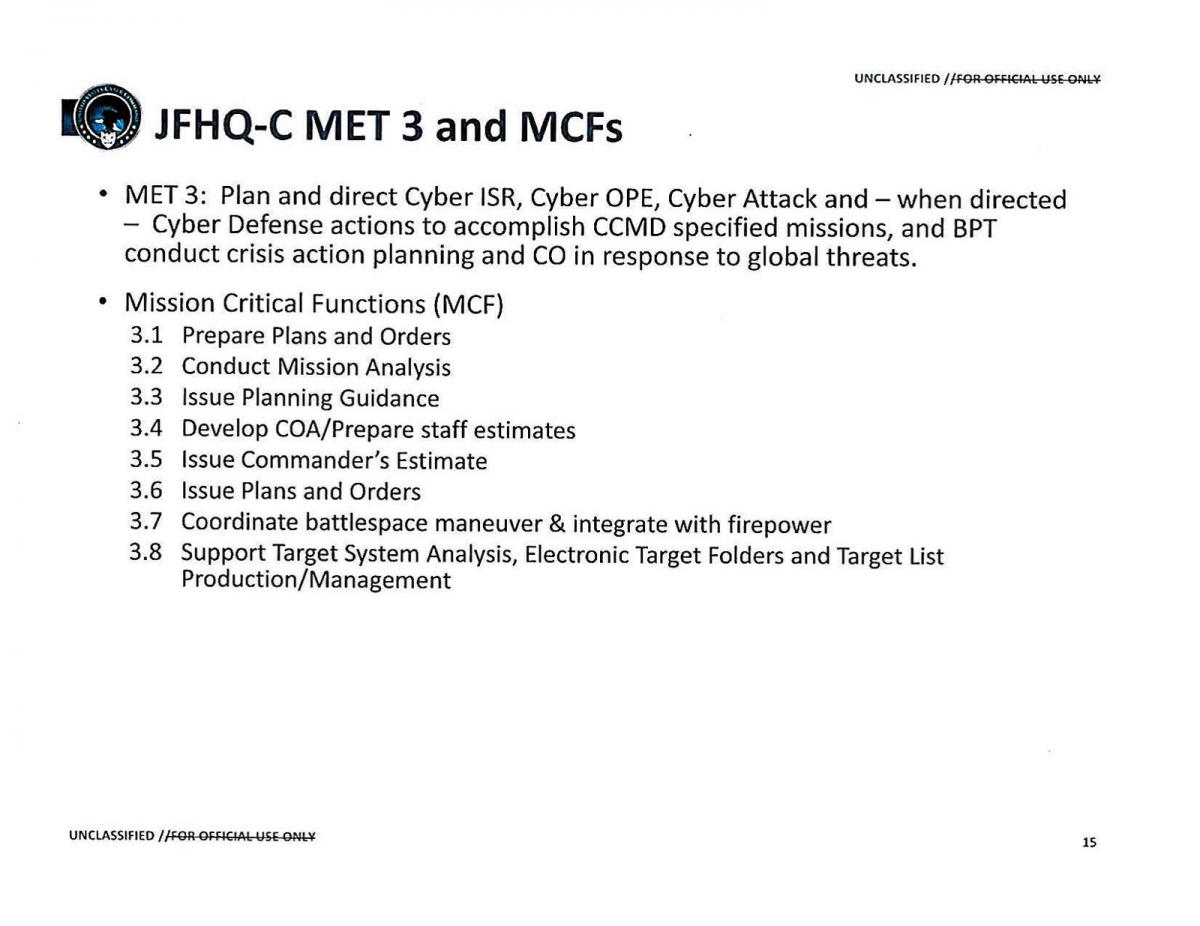 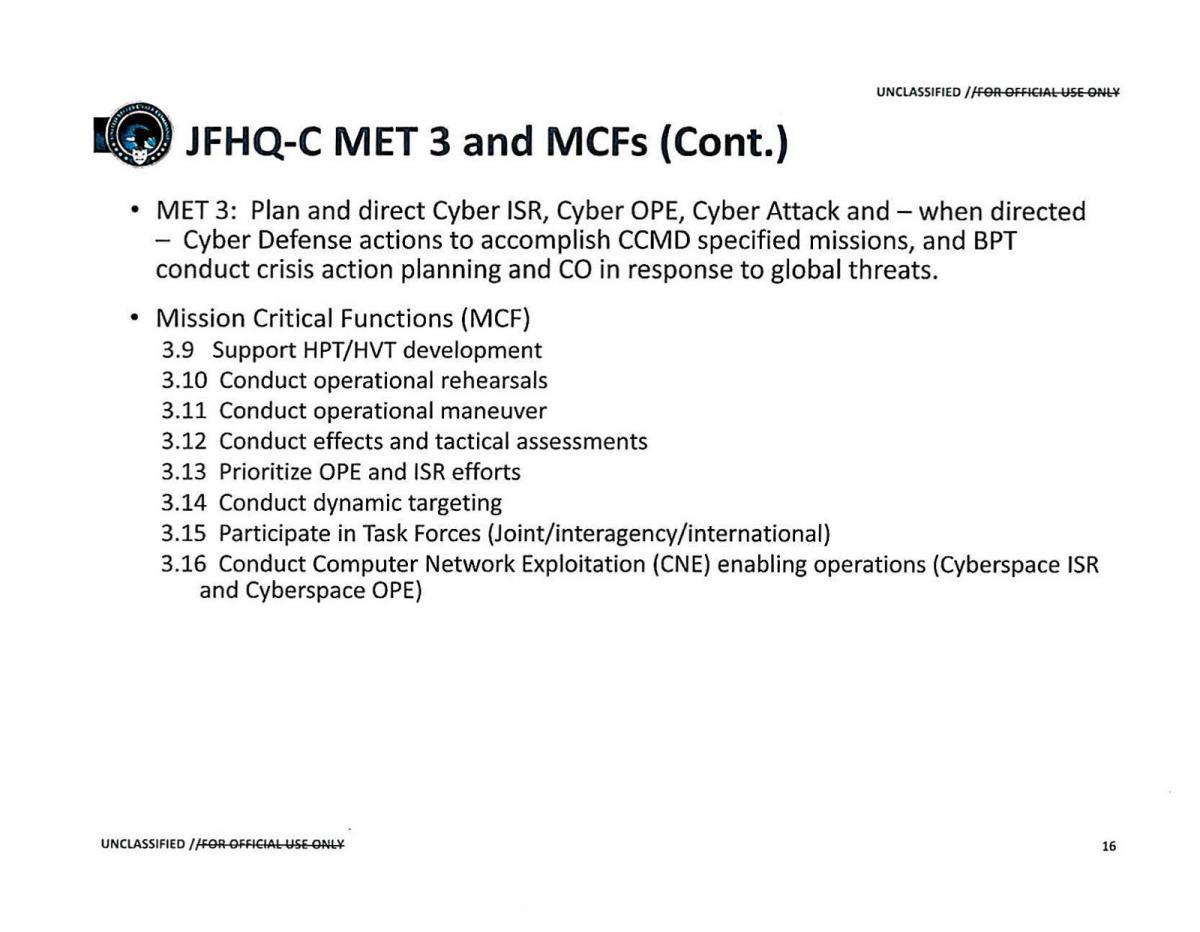 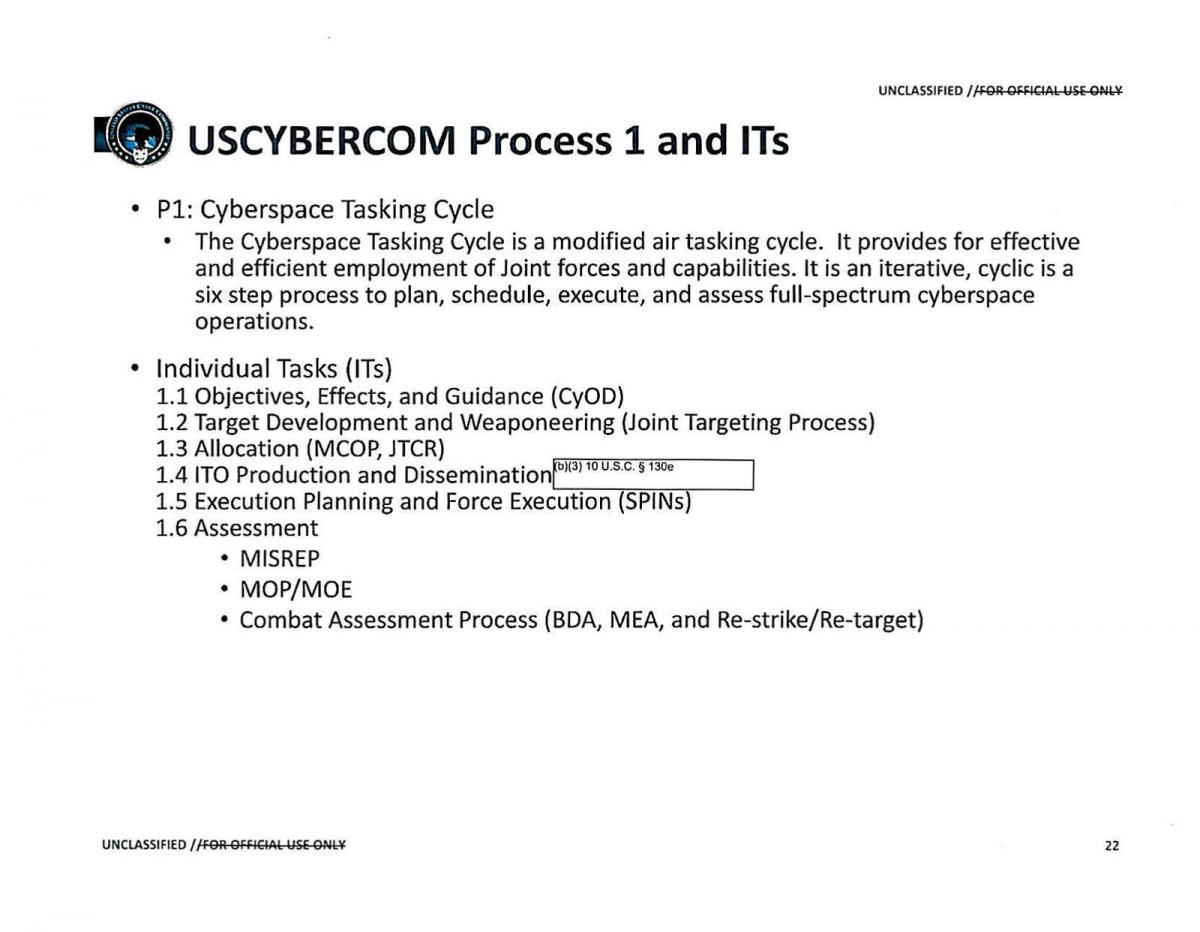 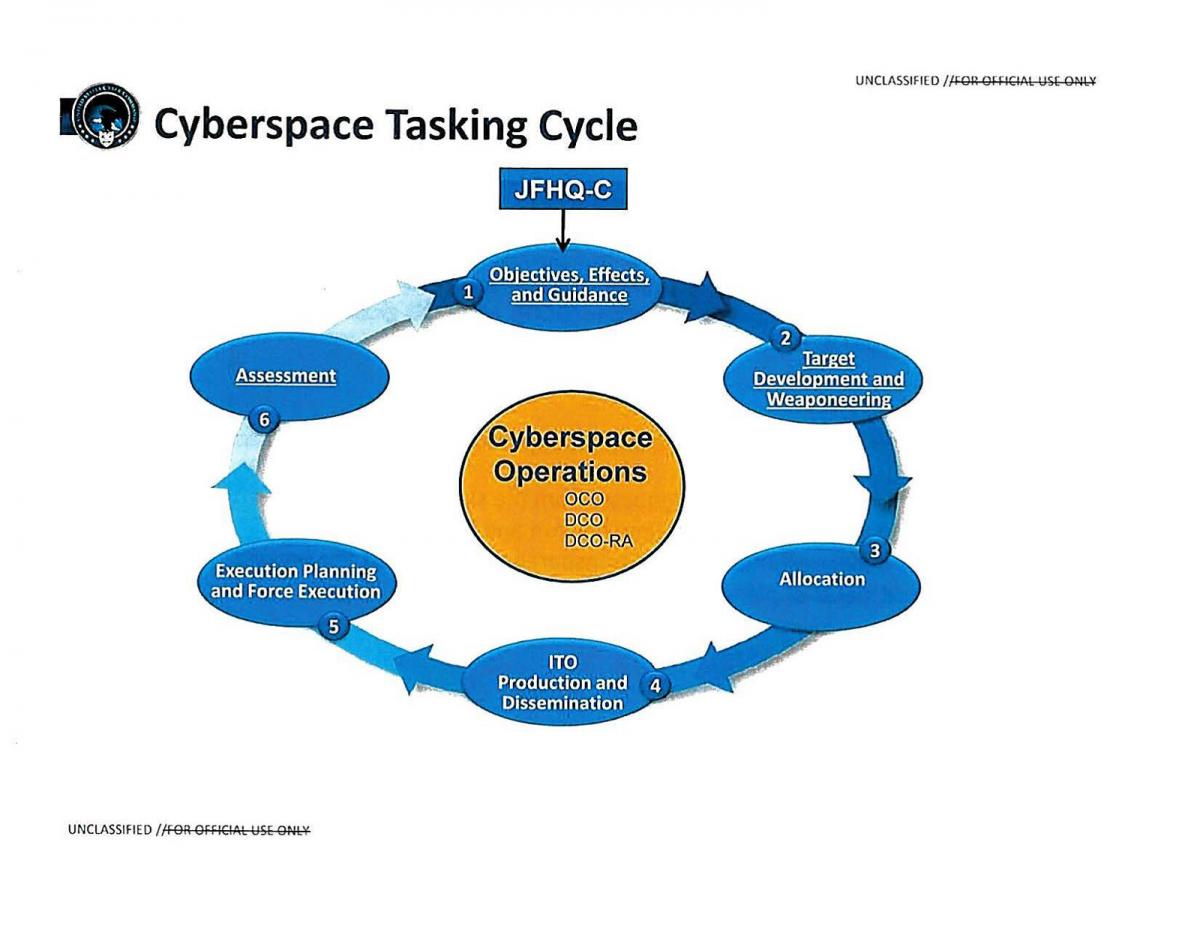 An adaptation of the Air Tasking Cycle, the Cyberspace Tasking Cycle links objectives, planning, action, and outcome assessment in a formalized series of steps. 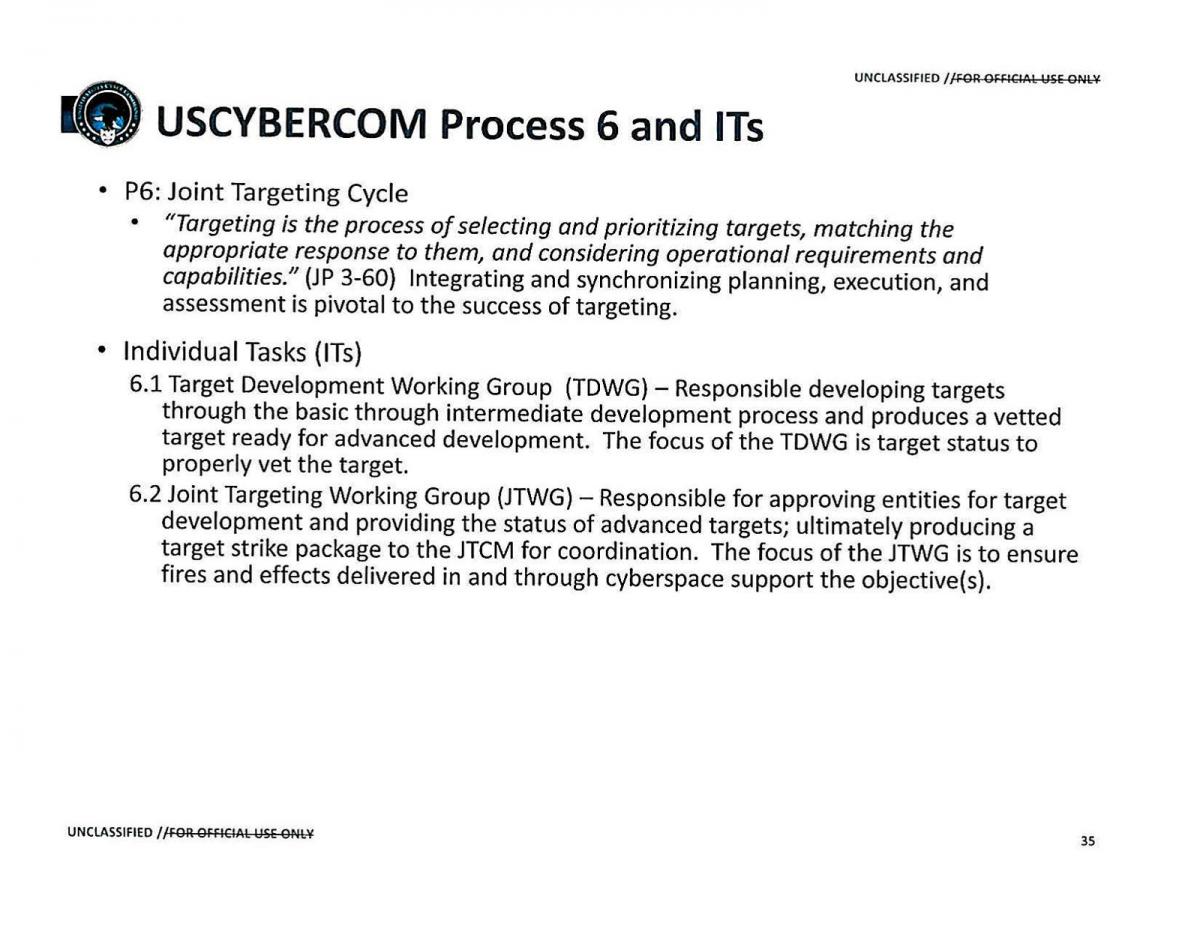 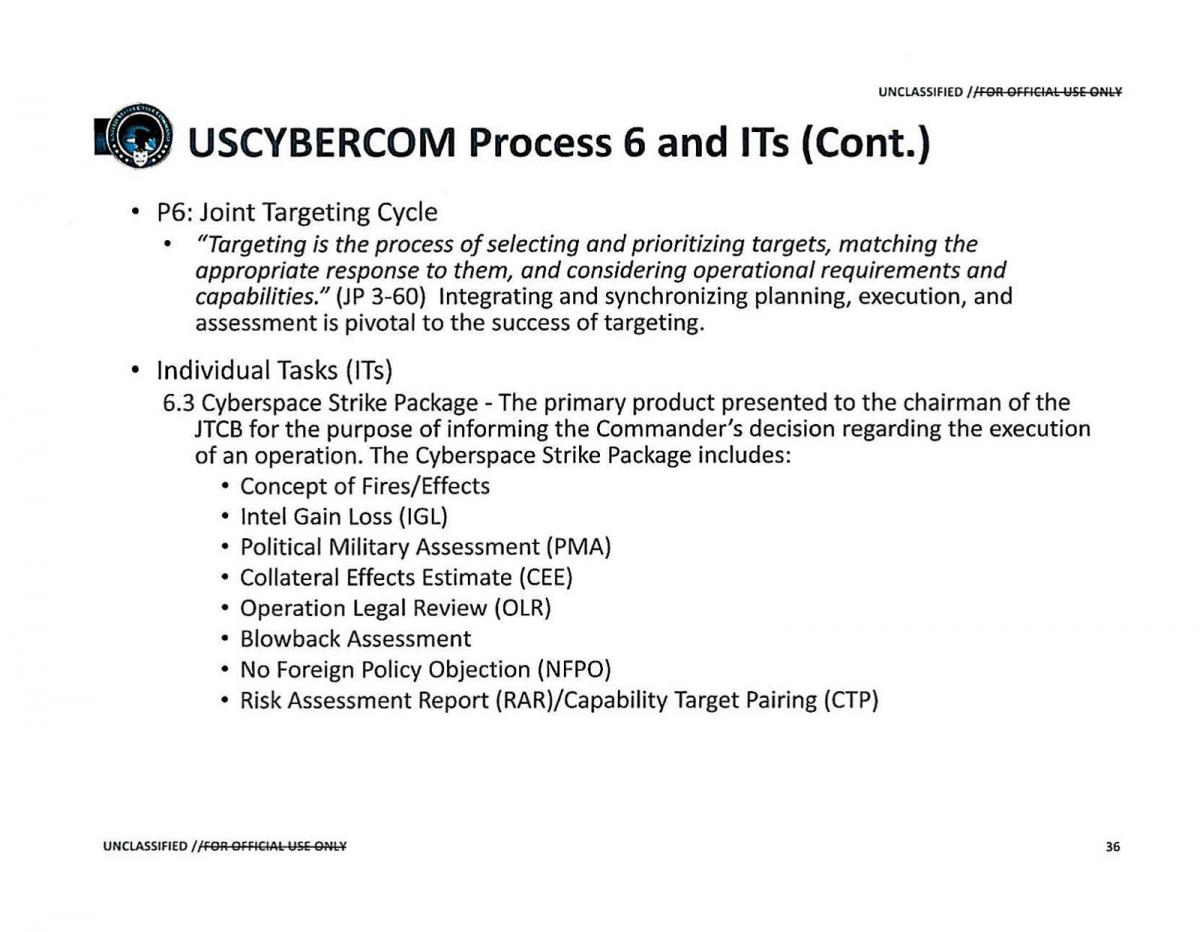 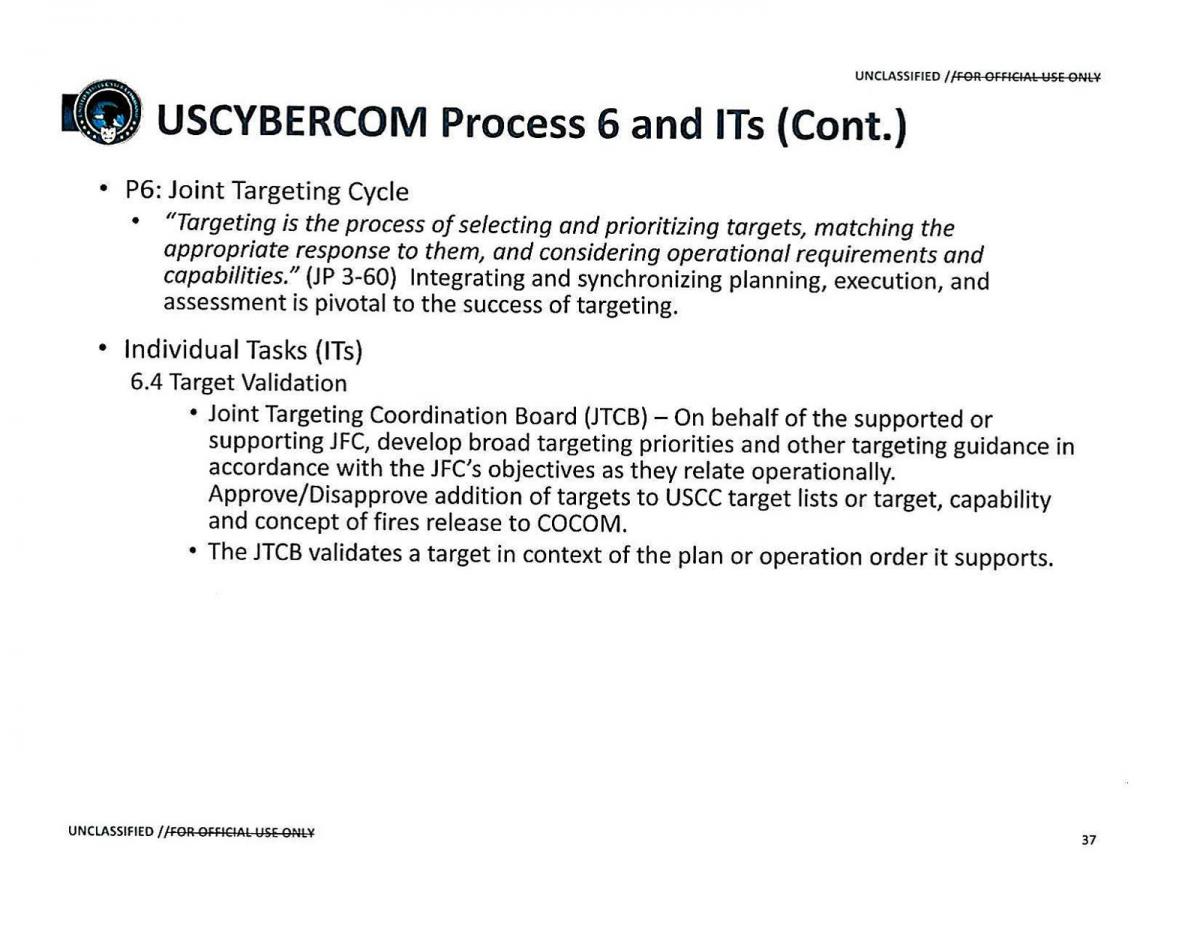 The Joint Targeting Cycle is the process by which the US Military selects targets for individual action. These slides reveal how targets are developed, how they are selected, and what goes into a Cyberspace Strike Package, the product presented to a commander before deciding whether to execute a mission in cyberspace.

Despite the development plans presented in the documents above, a Department of Defense Inspector General report [Document 8] produced in November of 2015 identified several shortfalls in USCYBERCOM’s unified strategy and approach for developing capabilities. While some concerns from a 2011 GAO report had been addressed, “Service Components continued to use Component-specific approaches and strategies to develop offensive capabilities that aligned to traditional Component-specific mission areas rather than unify capability development to support the CMTs. This occurred because USCYBERCOM did not have appropriate authorities to effectively oversee and direct offensive capability development.”

The overall development of the CMF teams was also found to lack central guidance, as there was no established framework for doctrine, organization, training, materiel, leadership and education, personnel, facilities, and policy (DOTMLPF-P) guiding the process. A Marine Corps official interviewed by the IG reported that the rush to build and field CMF teams took priority over developing a guiding DOTMLPF-P framework, suggesting the rush to build the CMF was not without consequence.

While security researchers studying relatively transparent “conventional” military bodies have made significant contributions in the fields of operational art, tactics, organizational behavior, and the utility of military force, similar contributions to the field of cyber operations have been limited by secrecy. These declassified USCYBERCOM documents are an important view into the operating processes of a military’s cyber operations arm.