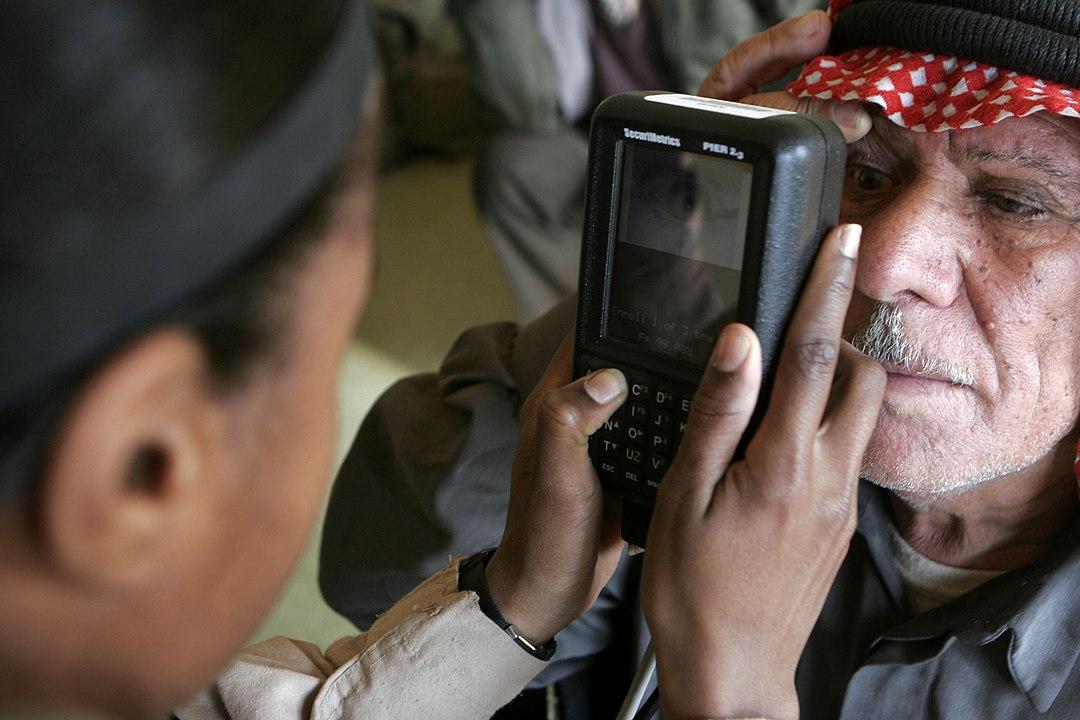 Washington D.C., August 20, 2021 - As the world observes the withdrawal of American forces from Afghanistan, the subsequent collapse of the Afghan government and the resurgence of the Taliban, it will also likely witness the targeting and persecution of thousands of Afghans, aided by U.S.-collected biometrics. In a report from The Intercept, a current U.S. military official and former U.S. military personnel confirmed that Handheld Interagency Identity Detection Equipment (HIIDE) devices were seized by the Taliban in its offensive against Afghan government forces. Reporters Ken Klippenstein and Sara Sirota note, “HIIDE devices contain identifying biometric data such as iris scans and fingerprints, as well as biographical information, and are used to access large centralized databases,” possibly providing the Taliban with the means to pursue members of the Afghan government or those who had cooperated with U.S. and coalition forces.

This revelation gives further reason for concern about the fate of Afghan citizens who might be targeted by the Taliban for working with the previous government or western forces.  At the time of writing, it is unclear how many devices have been claimed by the Taliban, or to what extent the U.S. military’s biometric database on the Afghan population has been compromised.  The deployment of such biometric collection methods by governments elsewhere (such as their use on the Uighur population of China) is creating increasingly urgent civil liberties and human rights concerns.

According to Department of Defense Directive 8521.01E (Document 1), biometrics is a “general term used alternatively to describe a characteristic or a process” (p. 14), identified as both a measurable biological and/or behavioral characteristic that can be used for automated recognition (such as a fingerprint or iris scan), as well as the automated processes employed to identify an individual based on these characteristics. Over the course of a two-decade campaign, U.S. forces in Afghanistan had collected biometrics from friends and foes alike for identification verification, security, and intelligence purposes. Investigative reporter Annie Jacobson asserts that the Pentagon’s original goal was to collect biometric data on 80% of the Afghan population, although it is unknown if this was achieved.

The biometrics collection regime in Afghanistan, which began in earnest in 2006, was largely packaged as a way to more efficiently identify and detain current insurgents, and dissuade aspiring insurgents. In a 2014 article for the Joint Force Quarterly, “Biometric-enabled Intelligence in Regional Command-East” (Document 2), David Pendall and Cal Sieg note that “the overarching purpose of using BEI [biometric-enabled intelligence] and biometrics-based toolsets [was] to deny anonymity and increase the effectiveness of security and police operations” (p.70).  Once biometric data was collected, individuals were enrolled in an extensive data repository, which could be accessed by coalition and Afghan National Security Forces (ANSF) across the country. Such enrollment was achieved through volunteerism from local villages, or involuntarily from those detained as witnesses or possible perpetrators in security incidents. “Following enrollment and upload of the biometric data to the data repositories, the anonymity previously counted on by the insurgent [was] removed,” increasing the likelihood that insurgents would be connected to prior incidents, such as improvised explosive device (IED) attacks, through fingerprints or other datapoints. Enrollment also made future participation in insurgent activity riskier, thus acting as a deterrent for would-be insurgents. As a result of this collection program, Pendall and Sieg assert, “biometric intelligence-driven operations have achieved major impacts on the insurgent ability to maintain leadership and lower-level cell structures as both coalition and Afghan forces regularly employ[ed] biometrically developed insurgent watch lists and ‘be on the lookout’ (BOLO) messages and as they execute[d] deliberate detention operations.” (p.69).

However, the biometrics enrollment program was also utilized to provide identity verification for Afghans cooperating and collaborating with U.S. and coalition forces. In a 2011 GAO report entitled, “Defense Biometrics: DOD Can Better Conform to Standards and Share Biometric Information with Federal Agencies” (Document 3), the report writers note the variety of locales and applications for which the Department of Defense utilizes biometrics, including “from persons seeking access to U.S. installations in Iraq and Afghanistan” (p.5). “DOD considers the variety of mission-needs for collecting biometric information” that take place in a combat environment, including “business operations, such as base access control to verify Common Access Card credentials” (p.6).

With the Taliban’s swift reclamation of Afghanistan, those individuals identified by the U.S.-led biometrics program and labeled as “friendlies” are now at greatest risk. In The Intercept report, an Army Special Operations veteran expressed concern that, although the Taliban may require additional tools to access HIIDE data and pursue Afghans who assisted U.S. and coalition forces, their allies in the region are likely willing to offer their expertise. According to this former Special Forces official, “the Taliban doesn’t have the gear to use the data but the ISI do,” referring to Pakistan’s spy agency, the Inter-Services Intelligence, which is widely reported to be the Taliban’s primary international benefactor.

The three documents below shed light on DOD’s strategies for biometric data collection, processing, and sharing among partner agencies. They also provide insight into how biometric-enabled intelligence was employed in Afghanistan, and how such technologies might have been embraced in the country’s new U.S.-cultivated legal and justice system. However, the documents are silent as to the fate of those Afghans who partnered with coalition forces in the hope that they would be free of Taliban rule, and whose biometric data labels them as such.

This DOD Directive, issued in January 2016 and incorporating changes to be effective October 15, 2018, establishes policy and assigns responsibilities for DOD biometrics. It also “designates the Under Secretary of Defense for Acquisition, Technology, and Logistics (USD(AT&L)) as the Biometrics Principal Staff Assistant (PSA) responsible for oversight of DoD biometric activities and policy,” as well as “the Secretary of the Army as the DoD Executive Agent (EA) for Biometrics.”

This article, printed in Joint Force Quarterly, a publication of the National Defense University, argues that biometric-enabled intelligence (BEI) is a key component in counterinsurgency efforts in Afghanistan, and also highlights some insights derived from the biometric collection regime deployed by coalition forces.

This GAO report analyzes the data sharing practices of the DOD’s biometric data program, and makes a series of recommendations to “improve DOD's ability to collect and help ensure that federal agencies are sharing biometric information on individuals who pose a threat to national security to the fullest extent possible.”