Cables Describe Detention and Torture of Al-Nashiri in November 2002

Washington, D.C., April 27, 2018 – The National Security Archive filed suit under the Freedom of Information Act (FOIA) against the CIA today in federal district court in Washington. The case seeks 12 specific cables from November and December 2002 that were authored or authorized by Gina Haspel, the acting director of the CIA as of this morning. The cables describe the torture of a CIA detainee under her supervision.

The Archive filed a FOIA request with the CIA for the 12 cables on April 16, 2018. The Archive FOIA sought expedited processing, which must be granted to requests with a “compelling need...made by a person primarily engaged in dissemination of information [with] urgency to inform the public concerning actual or alleged Federal Government activity.” Expedited processing is clearly warranted in this instance, as Gina Haspel’s Senate confirmation hearing for CIA director is slated for May 9.

The CIA denied the Archive’s request for expedited processing, arguing that the request was not “made by a person primarily engaged in dissemination of information.” In the same letter, the CIA granted the National Security Archive “news media fee status.”

The 12 cables were identified by National Security Archive staff in the Senate Select Committee on Intelligence’s report, Committee Study of the Central Intelligence Agency’s Detention and Interrogation Program, declassified in 2014. The cable numbers correspond to the time period Al Qaeda suspect Abd al Rahim al Nashiri (who was captured in Dubai) spent in a CIA black site prison in Thailand where he was waterboarded three times. New York Times and Pro Publica reporting confirms that Haspel was the chief of base of the black site when Nashiri arrived and immediately underwent torture.

The Emmy and George Polk-Award winning National Security Archive has obtained through FOIA thousands of CIA documents over the years, ranging from the CIA’s internal history of the Bay of Pigs disaster to the compilation of CIA illegalities known as “The Family Jewels.”

The Archive sponsored the production of the award-winning 2008 documentary film “Torturing Democracy,” which chronicles the evolution of U.S. policy on detention and interrogation post- September 11, 2001 and shows how Japanese war crimes and Chinese and North Korean torture techniques – taught in the U.S. military’s survival training to enable soldiers to resist those methods – became standard operating procedure for CIA and military detainees after 9/11. Produced and directed by Archive senior fellow Sherry Jones, “Torturing Democracy” won the Robert F. Kennedy Journalism Award as the "definitive broadcast account of a deeply troubling chapter in recent American history."

The Archive also maintains and curates the Torture Archive, an online repository of more than 16,000 documents charting the evolution of United States government policy on torture.

The National Security Archive filed a FOIA request with the CIA for 12 cables describing the torture of a CIA detainee under Gina Haspel's supervision.

The CIA denied the Archive's request for expedited processing of our April 16 FOIA request in a letter dated April 18 but sent by regular mail and received on April 24.

The National Security Archive's complaint for expedited processing and release of the 12 CIA cables requested on April 16. 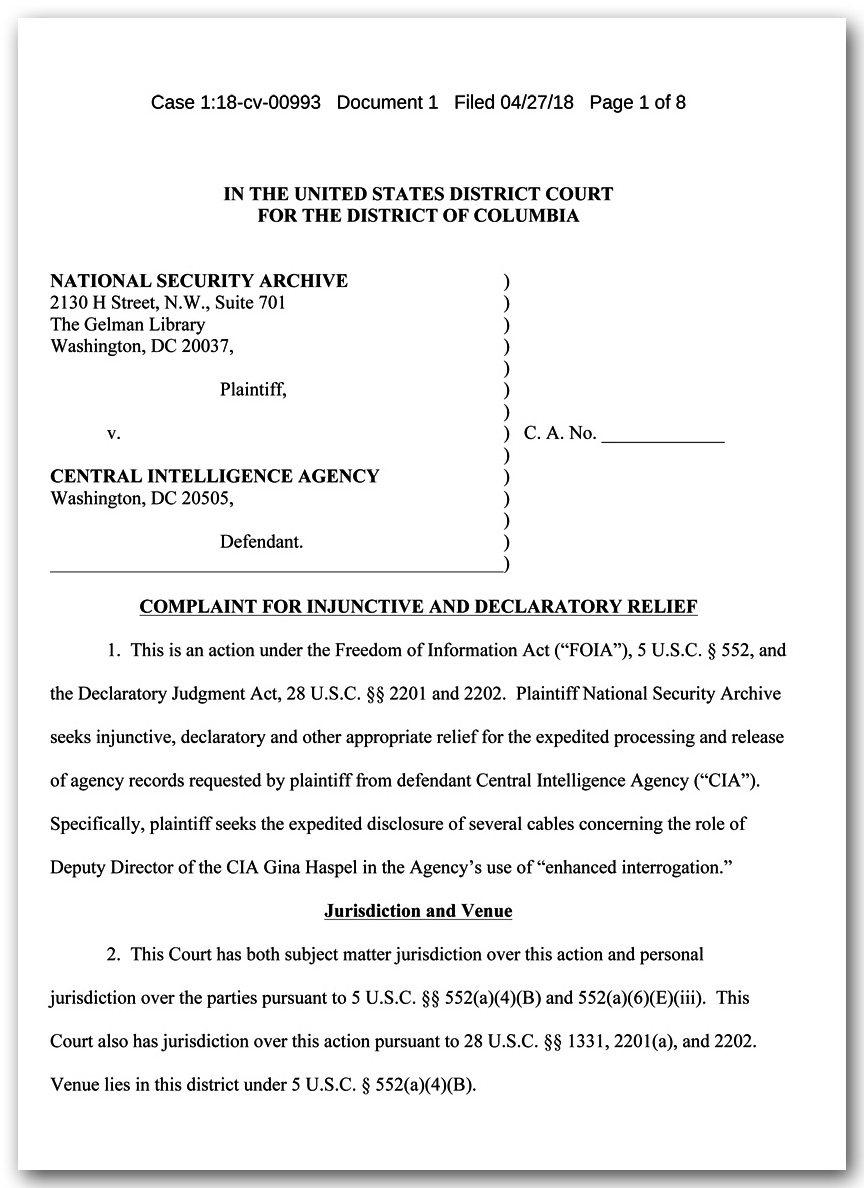 The Gina Haspel Nomination: Depending on Secrecy