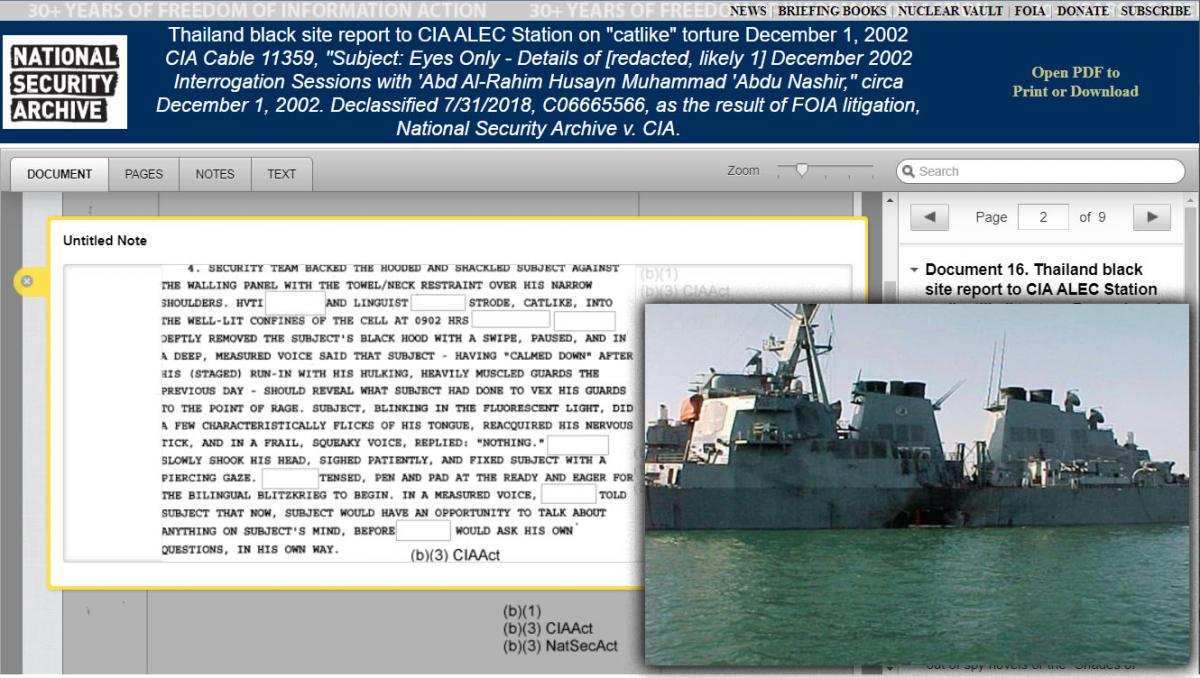 Washington, D.C., November 11, 2019 – A military judge presiding over the Guantanamo trial of alleged USS Cole bomber Abd al Rahim al-Nashiri cited a cable released to the National Security Archive as evidence that the system for handling classified CIA evidence at the detention camp’s national security trials is “flawed and unfair to the defense.” The current system allows prosecutors, working with members of the intelligence community, to decide what portions of evidence the defense needs for trial. Prosecutors, as Carol Rosenberg reports for the New York Times, “then redact portions of reports from the C.I.A. black sites or write summaries to substitute for the actual evidence.”

To reach his determination, Judge Col. Lanny J. Acosta Jr. compared a December 1, 2002, cable that was released to the Archive last year in response to a FOIA lawsuit to a version of the same cable prosecutors provided al-Nashiri’s defense attorneys. Judge Acosta found “the comparison undermines any contention the redactions are narrowly tailored to a legitimate need to protect national security.”

The cable that was released to the Archive, which was authored under current CIA director Gina Haspel’s command, describes Day 17 of al-Nashiri’s torture session at a black site prison in Thailand. It states "HVTI [redacted, CIA contract psychologist James Mitchell] and linguist [redacted] strode, catlike, into the well-lit confines of the cell at 0902 hrs [redacted], deftly removed the subject's black hood with a swipe, paused, and in a deep, measured voice said that subject - having 'calmed down' after his (staged) run-in with his hulking, heavily muscled guards the previous day - should reveal what subject had done to vex his guards to the point of rage." The cable provided to the defense was more redacted, and even omitted the word “catlike”, prompting Acosta to rule that some of the deletions made in the cables provided to the defense “could fairly be characterized as self-serving and calculated to avoid embarrassment.”

The Archive filed its FOIA request for the Haspel cable cited by Judge Acosta on April 16, 2018, after she was nominated by President Trump to be CIA director. Despite the clear public interest in the documents, the CIA denied the Archive’s request for expedited processing, and the Archive went to court on April 27. The U.S. Senate confirmed Haspel as CIA director on May 17 (by a vote of 54-45) on the basis of a record amassed almost exclusively in closed hearings, with no declassification or public release of information even remotely approaching that of previous CIA nominees.

David Sobel, FOIA expert and former Archive counsel, drafted and filed the initial Archive complaint in federal court; and the Archive’s pro bono counsel Peter Karanjia and Lisa Zycherman of the law firm Davis Wright Tremaine took on the task of negotiating with the U.S. Attorney’s office over release of the documents.