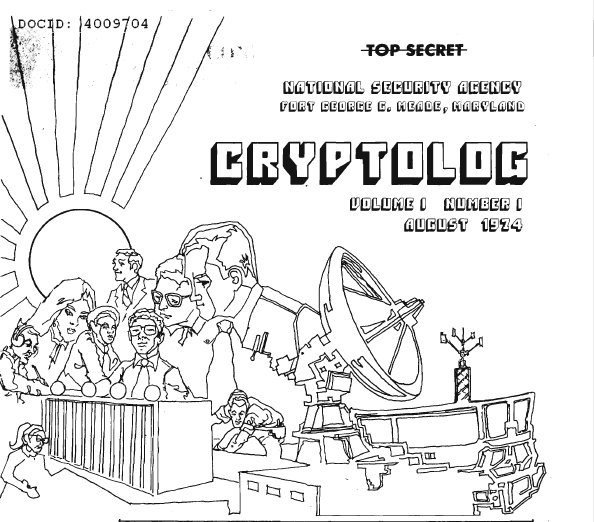 Since then, Cyber Vault Fellow Cristin J. Monahan has filed and monitored over 100 Mandatory Declassification Review requests (and counting) to NSA for security classified articles, puzzles, interviews, and how-to guides found in Cryptolog.

Highlights of the new additions include the following:

Newly declassified materials are noted below with an updated redaction level.  Subsequent releases from pending MDR requests will be added in the future.

Washington, D.C., December 4, 2018 - Five years ago, the National Security Agency (NSA) released 136 issues of its internal Cryptolog periodical spanning 1974 through 1997. The collection offered a look into the some of the discussions being held within one of America’s most secretive intelligence agencies. Today the GWU-based National Security Archive is providing a complete index of all 1,504 items in the declassified collection, including but not limited to articles, interviews, and puzzles.

By simply scanning article titles (see below) one can observe the shift in language as the NSA’s institutional grounding in cryptology and linguistics adjusts to accommodate and leverage developing information technology. As early as 1977, Cryptolog asks “What is an Information Research Analyst?” and argues that information science is underutilized by the agency. The following year the topic of data security is considered, only in terms of user and maintenance errors. By the mid-1980s writers give attention to the impact of the “Computer Age” on the field of intelligence analysis and highlight packet-switching networks in the Soviet Union. A series of educational articles on the UNIX shell begins in 1984, seeking to raise awareness of the tool among analysts.

The publication also serves as a venue for organizational reflection. Conflict between linguists and cryptanalysts over promotions and pay scales rages in the pages of Cryptolog for two years, and a four-part series (1 2 3 4) on the agency’s intern program is published in 1974. The publication also brought points of levity with appropriately vexing brainteasers for cryptanalysts and a short-lived bloopers feature.

This index was produced in hopes of encouraging and facilitating historical research into the NSA’s evolution through, and consideration of, the information revolution.

Note: to search the Cryptolog index by keyword, click on any unlinked cell below, then select Control + F.  A dialog box will appear, allowing users to find instances of that keyword in the table.