The Capitol Riot: Documents You Should Read (Part 3) 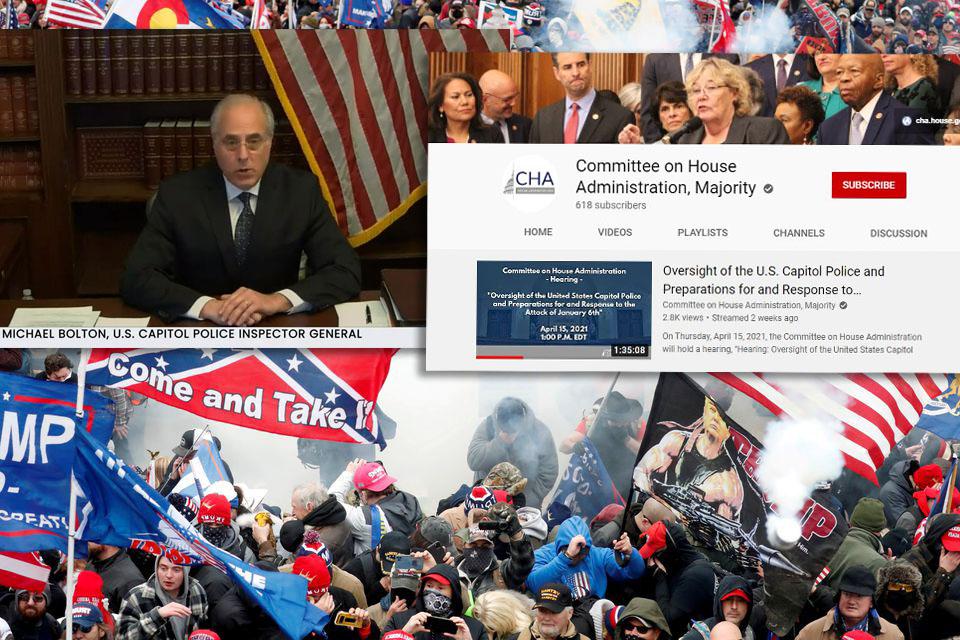 The Archive’s January 6 Sourcebook has been selected by the Library of Congress to be preserved “in the Library's historic collection of Internet materials related to the January 6th Attack on the U.S. Capitol Web Archive.” In a communication to the Archive, the Library noted: “We consider your website to be an important part of this collection and the historical record.”

According to the Library’s Web Archiving Program:

“The Library of Congress preserves important cultural artifacts and provides enduring access to them. The Library's traditional functions, acquiring, cataloging, preserving and serving collection materials of historical importance to foster education and scholarship, extend to digital materials, including websites. Our web archives are important because they contribute to the historical record, capturing information that could otherwise be lost. With the growing role of the web as an influential medium, records of historic events could be considered incomplete without materials that were ‘born digital’ and never printed on paper.”

Washington, D.C. - May 4, 2021 - Some United States Capitol Police (USCP) officers could not access their shields during the January 6, 2021, mob attack on the Capitol because the equipment was locked on a bus. Others had access to their shields, but, because they had been stored in a trailer without climate control, they shattered on impact.

These were just a few of the revelations made during USCP Inspector General Michael Bolton’s April 15 testimony before the House Administration Committee. His testimony is especially alarming considering the USCP’s own January 3 intelligence assessment stating that, “Unlike previous postelection protests, the targets of the pro-Trump supporters are not necessarily the counterprotesters as they were previously, but rather Congress itself.”

Bolton’s testimony is among the documents posted today in the National Security Archive’s third "January 6 Sourcebook." Other highlights include:

The documents posted today – and throughout the National Security Archive’s systematic FOIA campaign to open the documentary record on the Capitol riot – will serve as an important repository for the public, historians, and members of Congress, especially as hopes dim for a bipartisan, independent commission into the attack similar to the 9/11 Commission.

This 5-page, partially redacted document, which was obtained through the FOIA by the Washington Post, “is intended to inform FPS stakeholders of threats posed by, tactics utilized, threats utilized by foreign and domestic organizations throughout the National Capital Region (NCR) during the upcoming First Amendment protected activities. Domestic extremists to include anarchist extremists, anti-government extremists (AGE), and racially motivated violent extremists (RMVE) will likely participate in First Amendment protected activities and use the activities as an opportunity to promote their ideologies and motivate followers to promote violence.”

This 13-page document, which was obtained by the Washington Post through the FOIA, lists nearly 80 “First Amendment assemblies” taking place in Washington, D.C. between January 5 and January 29, 2021, including eight deemed of especially high visibility. The names of several events are redacted pursuant to FOIA exemptions (B)(6) – the personal privacy exemption – and (B)(7)(C), which provides protection for personal information in law enforcement records.

This FPS email notes that the Ellipse was permitted to have a crowd of 30,000 people, “but they [are] expecting for there to be much more. Freedom Plaza original permit was 5k and it was raised to 30k, the permit outside Sylven theater is permitted for 15K.”

This email recounts real-time incidents during the riot; including reports of a man with a rifle in the trees near the Ellipse, reports of rioters attempting to bypass the “no-bag” rule by stashing bags throughout the city, and a report that Proud Boys were threatening to shut down the water supply to downtown, including government buildings.

“Officer Brian Sicknick Died After the Capitol Riot. New Videos Show How He Was Attacked.”
Source

Statement of Christopher A. Wray, Director of the Federal Bureau of Investigations, Before the Senate Judiciary Committee
Source

Senate Judiciary Hearing, “Oversight of the Federal Bureau of Investigation: the January 6 Insurrection, Domestic Terrorism, and Other Threats”

FBI Director Christopher Wray stated in his written testimony to the Senate Judiciary Committee that   “The top threat we face from DVEs continues to be those we identify as Racially or Ethnically Motivated Violent Extremists (‘RMVEs’), specifically those who advocate for the superiority of the white race, and who were the primary source of ideologically-motivated lethal incidents of violence in 2018 and 2019.” Wray defended the bureau’s handling of the riot – primarily pointing to FBI Norfolk’s January 5 report that its office received information that anticipated violence at the Capitol – and rejected conspiracy theories that left-wing activists were responsible for the violence. He further  lamented the lack of law enforcement access to electronic evidence in general, particularly “the threat [that] end-to-end and user-only-access encryption pose to our ability to fulfill the FBI’s duty of protecting the American people from every manner of federal crime, from cyber-attacks and violence against children to drug trafficking and organized crime.”

Under Secretary of the Department of Homeland Security’s Office of Intelligence and Analysis   Melissa Smislova   stated during the question and answer portion of the Senate’s March 3 hearing that DHS “did not have anything specific about an attack on the Capitol to occur on Jan. 6.” Smislova emphasized in her oral and written testimony that she believed her office’s latest 15 unclassified strategic warnings about “the heightened threat environment and the potential for domestic violent extremists to mobilize quickly with little to no warning” were sufficient. Smislova also detailed steps I&A took on January 6, specifically establishing “a crisis action team to monitor the situation, augment our intelligence posture, and facilitate information sharing with critical partners and DHS leadership. I&A also increased its footprint in the Washington, DC Fusion Center to ensure direct engagement with those partners.” She went on to testify that “I&A proactively conducted briefings and stakeholder calls through the national network of Fusion Centers to share timely information about the threat environment that could inform their operations. I&A conducted direct outreach to the Director of Intelligence for the U.S. Capitol Police – which had access to the HSIN – and the National Capital Region’s National Threat Intelligence Center.”

General Walker’s written testimony is a helpful chronology of the day’s events and underscores the 3 hour and 19 minute delay between USCP Chief Sund’s request for immediate assistance and the DOD’s delayed approval. Walker’s testimony also underscores two chain-of-command moves he found unusual: “the Secretary of the Army’s memorandum to me required that a ‘concept of operation’ (CONOP) be submitted to him before any employment of the [Quick Reaction Force]. I found that requirement to be unusual as was the requirement to seek approval to move Guardsmen supporting MPD to move from one traffic control point to another.”

During the oral testimony, the timing of the Pentagon’s approval of Sund’s request came under the microscope. Robert G. Salesses, the assistant secretary of defense for homeland defense and global security in the Office of the Secretary of Defense, testified that Acting Secretary Christopher Miller approved Sund’s request by 4:32 p.m. – but Walker reiterated that he did not receive that communication until nearly 40 minutes later, at 5:08 p.m.

In response to a question from Sen. Angus King (I-ME), Walker said that the chain-of-command approval process could work within minutes, as it did in June 2020 during the D.C. protests of the murder of George Floyd. Walker stated that the delays on January 6 were caused by not being in the same location as the secretary of the Army, as he had been the previous summer, and concerns about optics.

This 15-page report, commissioned by House Speaker Nancy Pelosi and authored by Retired Lt. Gen. Russel Honoré, recommends a number of changes to improve the Capitol Police’s ability to respond to a crisis. Chief among them are: expand USCP’s intelligence team; “give the USCP Chief the authority to request external law enforcement and National Guard support without CPB preapproval in extraordinary emergency circumstances;” and “take immediate action to eliminate personnel shortfalls, currently 233 officers, through enhanced recruiting and incentive programs.”

Committee on House Administration hearing, “Oversight of the United States Capitol Police and Preparations for and Response to the Attack of January 6th”

The USCP IG’s official written testimony largely focused on two completed, non-sensitive Flash Reports. “The first report was a review of operational planning for January 6th including a review of the Intelligence gathering process 3 required for the operational plan that related to January 6th. Our second flash report focused on the Civil Disturbance Unit (CDU) and the Department’s intelligence operations as a whole. OIG will issue our third flash report on April 30  th, which will be focusing on threat assessment and the counter-surveillance unit. We anticipated our comprehensive Review would extend for the remainder of FY 2021.”

The flash reports were damning and underscored that USCP did not have adequate guidance or operational planning, and “failed to disseminate relevant information obtained from outside sources, lacked consensus on the interpretation of threat analyses, and disseminated conflicting intelligence information regarding planned events for January 6, 2021. Additionally, the Department did not require that all of its sworn and operational civilian employees obtain security clearances.”

Perhaps the most glaring item in the public reports to-date is the lack of awareness within the USCP of its Civil Defense Unit’s “Operational Plan for January 6, 2021,” which included a threat analysis from January 5 that stated, “At this time there are no specific known threats related to the Joint Session of Congress – Electoral College Vote Certification.”

Bolton also submitted a more detailed 104-page report to Congress that is not yet publicly available.

Critics have frequently contrasted the federal government’s aggressive response to social justice protests in 2020 to the muted response to the Capitol riot. A particularly apt contrast has been the DOD’s reaction to protesters near the White House on June 1, 2020, during which the D.C. National Guard was authorized to use extremely low-flying UH072 Lakota helicopters (primarily medical transports) to disperse crowds that were gathered to protest the murder of George Floyd.

A recently-released, partially redacted 18-page report on the D.C. National Guard’s use of the helicopters concludes that “there was a systematic lack of understanding regarding the employment and command and control of helicopters during civil disturbance operations, and the decisions to use the helicopters in support of the civil disturbance operations were reasonable given the emergent nature of the situation.” The helicopters flew below 100 feet (the Washington Post estimates they flew as low as 45 feet), and the report indicates some soldiers thought their mission was to deter looting and vandalism.

Regarding Brig. Gen. Robert K. Ryan, who oversaw the mission, the report states that one commander texted, “[Redacted] your helicopters are looking good!!” Ryan responded, “OMG! I am out here too. Incredible. I got special permission to launch. Full authorities.”

That the use of the helicopters was not deemed to be a violation of law begs further questions about the lack of such aggressive tactics on January 6.

This April 12, 2021, court filing sheds light on the government’s arguments against a “quick reaction force” of rioters who were allegedly stockpiling weapons at a Comfort Inn in nearby Arlington, VA, and who were committed to “bringing the tools if something goes to hell.” The filing, submitted by Assistant U.S. Attorney Jeffrey S. Nestler, includes photographs of one of the defendants, a high-ranking Oath Keeper and Army veteran named Kenneth Harrelson, with surveillance video of “what appears to be at least one rifle case down a hallway and towards the elevator,” and allegations that Harrelson had lied about deleting video of himself in the Capitol during his March 15, 2021, detention hearing.