The United States and the Chinese Nuclear Program, 1960-1964 Part II

Washington, D.C., October 16, 2014 – Fifty years ago today, on 16 October 1964, the People's Republic of China (PRC) joined the nuclear club when it tested a nuclear device at its Lop Nur test site in Inner Mongolia. For several years, U.S. intelligence had been monitoring Chinese developments, often with anxiety, hampered by the lack of adequate sources. Early on, opinions within the U.S. government varied widely -- from the views of RAND Corporation and State Department INR [Intelligence and Research] analysts who estimated that a nuclear-armed China would be "cautious" to the Institute for Defense Analyses, which saw "increase[d] risks for the United States and its allies that China will escalate hostilities to the point of initiating nuclear operations." As the Chinese nuclear test approached, the Defense Department's Office of International Security Affairs was alone in taking an alarmist view, projecting 100 million dead Americans in the event of conflict with China in 1980.

To mark the anniversary of the Chinese test, the National Security Archive and the Nuclear Proliferation International History Project are publishing, mostly for the first time, a wide range of declassified U.S. government documents from the early 1960s on the Chinese nuclear program and its implications. Documents include intelligence estimates and analyses reflecting efforts by U.S. intelligence to forecast when Beijing could and would test a weapon and what its diplomatic and military implications could be. During the summer of 1964, the discovery through satellite photography of a test site led to speculation that Beijing would soon stage a nuclear test. Other documents provide information on the State Department's decision to announce the Chinese test in advance — which it did on 29 September 1964 — in order to minimize its impact on world opinion.

Today's publication sheds light on the internal U.S. debate over the significance and implications of an initial Chinese nuclear capability. For example, the Institute for Defense Analyses saw increased risks that "China will escalate hostilities to the point of initiating nuclear operations, " while RAND Corporation analysts argued that "Chinese policy is likely to continue to be cautious and rational and to seek gains by exploiting those opportunities that represent acceptable levels of' risk." Similarly, the State Department's Bureau of Intelligence and Research (INR) believed that China would avoid "rash military action" because of its "relative weakness," and the risks of nuclear retaliation.

While President Kennedy had been worried enough about the prospects of a nuclear China to support contingency planning for preventive military action, by the time of the test the U.S. government had decided against such action. The arguments of an April 1964 top secret State Department study may have been influential: "the significance of [a Chinese nuclear] capability is not such as to justify the undertaking of actions which would involve great political costs or high military risks." Indeed, the author of that study noted that a preventive strike could miss important facilities and Beijing would continue to build the bomb. As views about Chinese caution became more typical, a report from the Defense Department's Office of International Security Affairs, prepared in early October 1964, was an outlier: based on the assumption of rapid growth of Chinese nuclear forces, it saw "very important and potentially dangerous consequences," including the need by 1980 to "think in terms of a possible 100 million U.S. deaths whenever a serious conflict with China threatens."

Nonproliferation concerns shaped U.S. thinking about the significance of a nuclear China.[1] The possibility that a Chinese nuclear capability would encourage decisions for national nuclear programs among China's neighbors raised some anxiety, especially with respect to India. Whatever the exact risks were, Secretary of State Dean Rusk observed in late 1963, "Our interest in a formal agreement on non-proliferation is 95% percent because of Communist China." A study produced in 1964 by theArms Control and Disarmament Agency shows how apprehension about a Chinese nuclear capability deepened interest in a global nonproliferation agreement as way to make "more difficult any national decision by non-nuclear powers … to acquire a nuclear capability."

Before China conducted its test, Washington had expected that it, like nuclear powers before it, would test a plutonium-fueled device; the evidence at hand was thought to corroborate that. U.S. government officials and intelligence experts were startled when technical information collected by the Air Force showed that the device was fueled by highly-enriched uranium from a then-unknown source. An INR report prepared a few weeks after the test demonstrated how perplexed the U.S. intelligence community was over how Bejing had acquired the U-235. While a gaseous diffusion plant in Lanzhou had in fact produced the U-235,[2] U.S. intelligence did not believe that it had been in operation long enough to produce enough fissile material, but could not identify another possible source in China; moreover, it was "difficult to imagine that the Soviets would supply weapons-grade U-235."

Other highlights of today's publication:

The Chinese leadership sought nuclear weapons because of their experience in confrontations with the United States during the 1950s. In this respect, the 1955 Taiwan Straits crisis had central importance to Mao's decisions.[3] As he explained to the Communist Party Politburo in April 1956: "Not only are we going to have more airplanes and artillery, but also the atomic bomb. In today's world, if we don't want to be bullied, we have to have this thing." By then, the Chinese leadership had already made major decisions to launch a nuclear program. Moreover, they reached out to Moscow for scientific and technical assistance in launching a nuclear program. That Beijing wanted nuclear weapons, at least for basic security purposes, was well understood in Washington. According to a major State Department study from October 1963, a nuclear capability had "direct military value" to China as a deterrent against attack on its territory.

Today's posting follows up, and includes a few items from, an Electronic Briefing Book on "The United States and the Chinese Nuclear Program, 1960-1964," that the present editor and Archive senior fellow Jeffrey T. Richelson compiled in early 2001. That collection of estimates and studies coincided with an essay that International Security had recently published in its Winter 2000/2001 issue: "Whether to 'Strangle the Baby in the Cradle': The United States and the Chinese Nuclear Program, 1960-64." That article reviewed early U.S. government intelligence and policyanalysis of the Chinese nuclear program and the internal debate during 1963-1964 over the significance of a Chinese nuclear capability and whether it was necessary to initiate preventive action to forestall a Chinese nuclear capability. 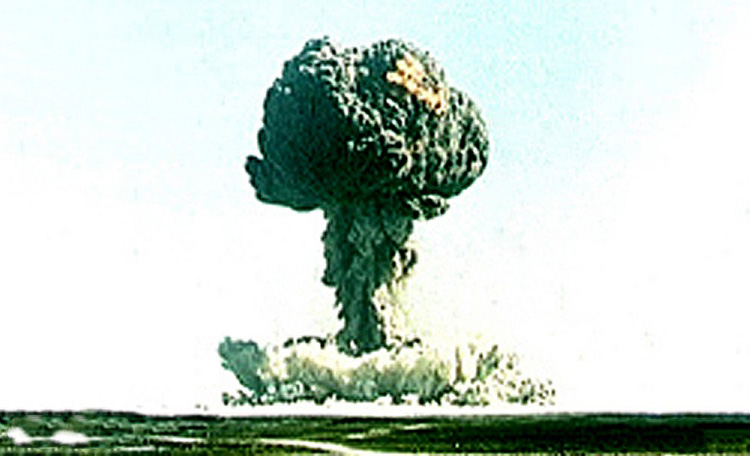 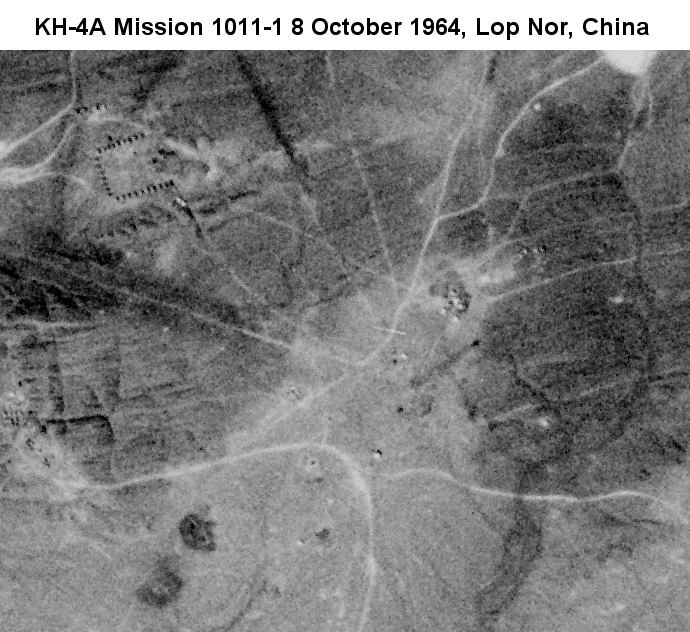 The Chinese test site at Lop Nur (or Lop Nor) as photographed on October 8, 1964 by a KH4-A satellite. (Photo courtesy of Tim Brown with Talent-Keyhole.com) 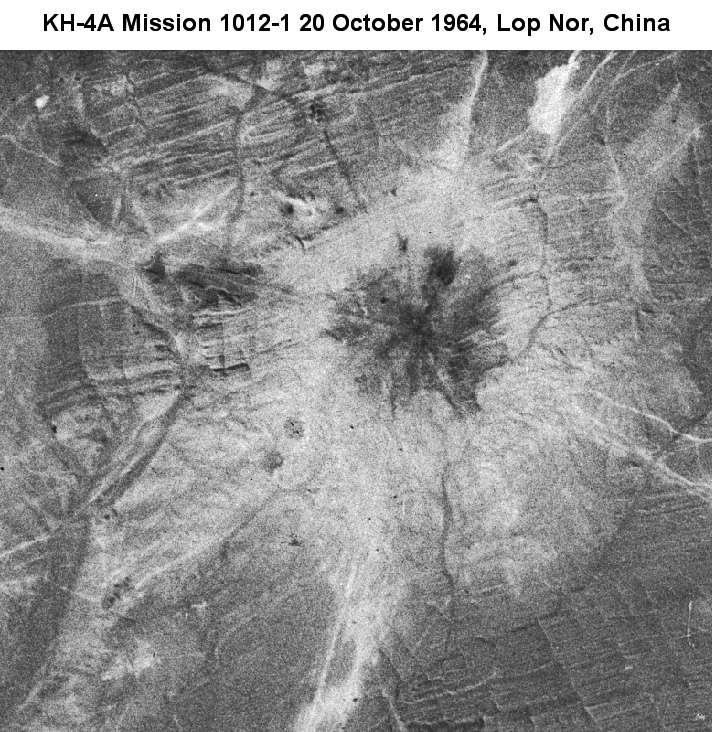 The Chinese test site at Lop Nur as photographed on October 20, 1964 by a KH-4 satellite four days after the test. (Photo courtesy of Tim Brown, with Talent-Keyhole.com) 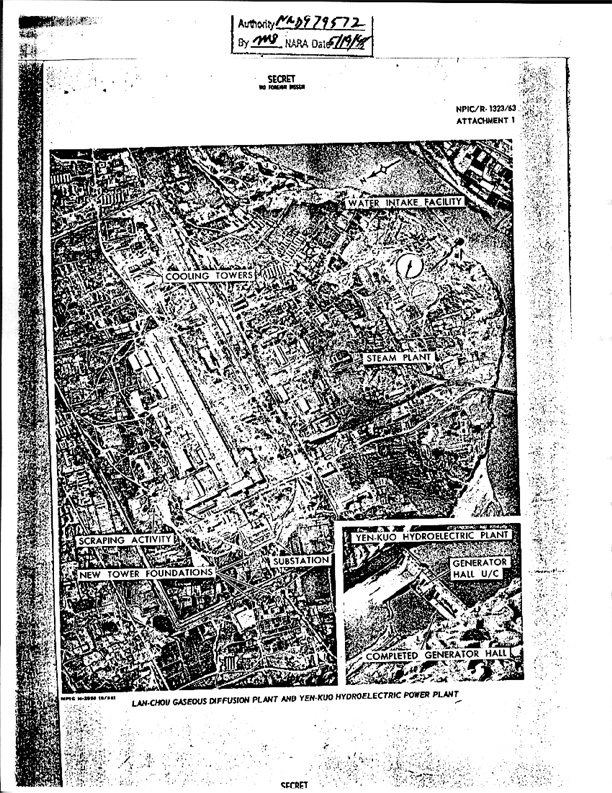 The Lanzhou Gaseous Diffusion Plant, as photographed in 1963 by a CIA U-2 aircraft flown by a Taiwanese pilot. U.S. intelligence analyses significantly underestimated Lanzhou's ability to produce the highly enriched uranium needed for China's first bomb. This photo was reproduced in a July 1963 study by the U.S. Arms Control and Disarmament Agency. 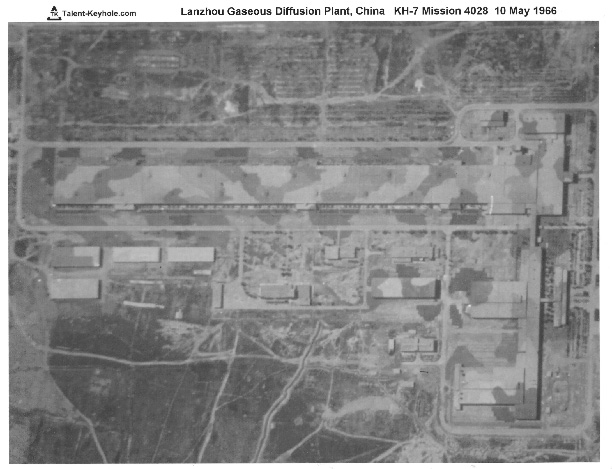 The Lanzhou Gaseous Diffusion Plant, as photographed on May 10, 1966 by a KH-7/GAMBIT satellite (Mission 4028). For more satellite imagery, see "Eyes on the Bomb: U-2, CORONA, and KH-7 Imagery of Foreign Nuclear Installations." 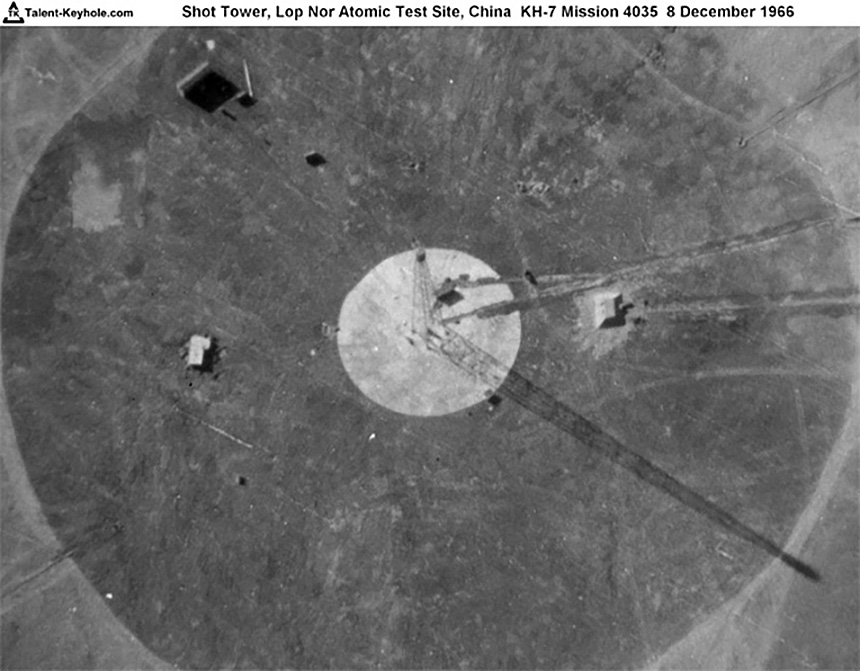 The Lop Nur nuclear test site in northwestern China, photographed on December 8, 1966, during a KH-7/GAMBIT satellite reconnaissance mission. A test occurred on December 28, 1966. 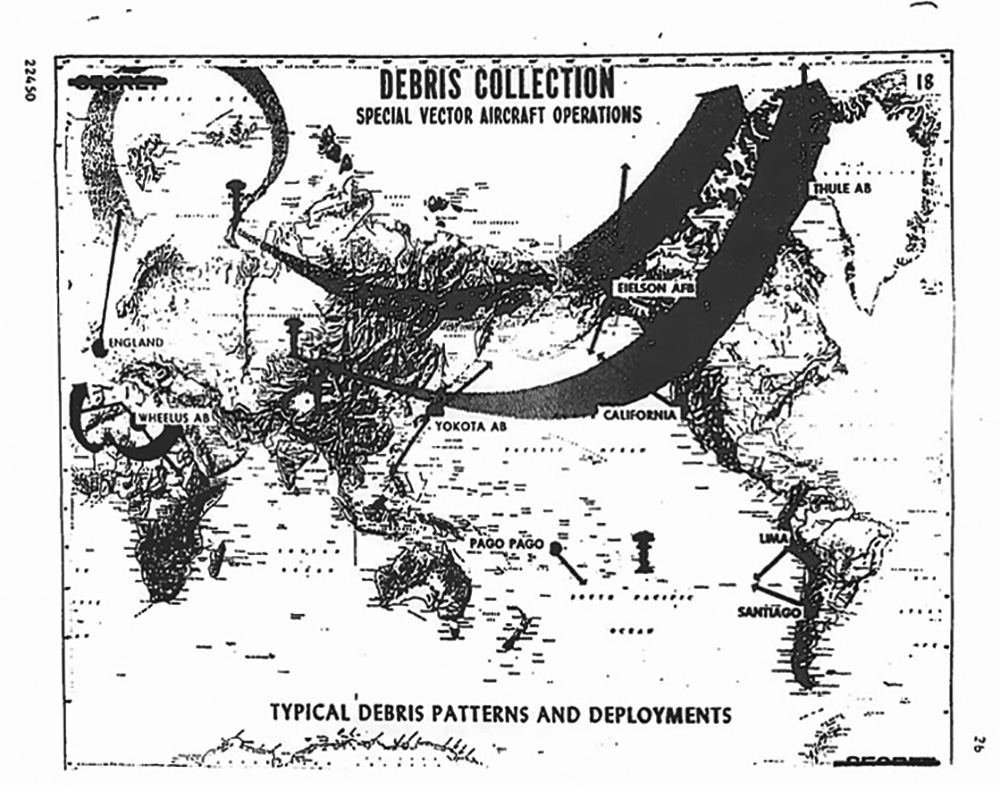 This image, reproduced from document 33, shows the typical flight paths taken by AFTAC aircraft to collect samples from the clouds of radioactive debris emanating from overseas atmospheric nuclear tests. One of the mushroom clouds in the image appears to be at, or very close to, the Lop Nur test site in Northwestern China. The aircraft used in the collection mission flew from bases in the Pacific, North Africa, and the United Kingdom.

[1] For proliferation and other concerns about China, see also Francis Gavin, "Blasts from the Past: Proliferation Lessons from the 1960s," inNuclear Statecraft: History and Strategy in America's Atomic Age (Ithaca: Cornell University Press, 2012), 75-81, and Shane Maddock, Nuclear Apartheid: The Quest for American Atomic Supremacy from World War II to the Present (Chapel Hill: University of North Carolina Press, 2010).

[7] See Gordon Chang, "JFK, China, and the Bomb," Journal of American History 74 (1988): 1289-1310, for background on these developments, as well as Noam Kochavi's. A Conflict Perpetuated: China Policy during the Kennedy Administration (Westport: Praeger, 2002).

[10] Contrary to the ISA apprehensions, during the decades that followed China developed relatively small ballistic missiles forces on the basis of a minimum deterrent posture. See Jeffrey A, Lewis, Minimum Means of Reprisal: China's Search for Security in the Nuclear Age (MIT Press, 2007).

[11] Wilson and Litai, China Builds the Bomb, 166. On China and the gas centrifuge, see R.Scott Kemp, "The Nonproliferation Emperor Has No Clothes: The Gas Centrifuge, Supply-Side Controls, and the Future of Nuclear Proliferation," International Security 38 (Spring 2014):Â  51-52.