60th Anniversary of Irish Resolution: A Forerunner of the NPT

Minister for External Affairs Frank Aiken signing the Nonproliferation Treaty at the Moscow signing ceremony on 1 July 1968. Owing to his role in promoting nuclear nonproliferation at the United Nations during 1958-1961, he was the first person to sign the Treaty. (Photo from Frank Aiken Papers, Archives, University College Dublin, item number P106/6942)
Published: Oct 29, 2018
Briefing Book #646

Resolution Approved at U.N. in 1961 After NATO Nuclear Concerns Addressed

The texts of the Irish Resolution as presented to the UN General Assembly for each year from 1958 to 1961, drawing on Evgeny M. Chossudovsky's “The Origins of the Treaty on the Non-Proliferation of Nuclear Weapons: Ireland's Initiative in the United Nations (1958-61), ”Irish Studies in International Affairs," 134-135

Washington D.C., October 29, 2018 — Sixty years ago, in October 1958, Irish Minister of External Affairs Frank Aiken bought before the United Nations the first version of a resolution addressing the dangers of nuclear proliferation. U.S. State Department officials initially found it “potentially dangerous” and “disruptive,” but three years later the U.S. government voted, with the rest of the U.N. General Assembly, in favor of the “Irish Resolution,” which is widely regarded as the forerunner of the Nuclear Nonproliferation Treaty (NPT).

Today, on the resolution’s anniversary, the National Security Archive publishes for the first time declassified U.S. government documents on developments in U.S. policy toward the resolution – from initial hostility to eventual support – including records of discussions with Aiken and other Irish officials over the resolution and its wording.

According to the declassified documents, what made Aiken interested in an international nonproliferation agreement was that if the “Nuclear Club” grew larger than four members (U.S, U.K., Soviet Union, and prospectively France), “control over nuclear weapons will have become impossible,” and the probability of nuclear conflict would increase, one that he saw increasing in geometric proportions. Aiken told U.S. Ambassador to the United Nations Henry Cabot Lodge that a non-transfer agreement that froze the size of the “Nuclear Club” could create a “‘Pax Atomica’” and “enduring stability.” He believed that the Soviet Union would be supportive of a nonproliferation agreement because the Soviets “do not wish to transfer weapons” to China, which “would lead to loss of Russian control,” and were "terrified" of the prospect of a nuclear-armed West Germany.  It was such considerations that motivated Aiken to introduce a nonproliferation resolution to the UN General Assembly each year from 1958 to 1961.

By supporting nonproliferation at the UN, Aiken, an important figure in the Irish independence movement, took a step that raised his country’s “international profile as a small but confident actor on the world stage.” A major study of the resolution written in 1990 characterized it as an “historic landmark”: equivalent to the first draft of the NPT because it required the nuclear weapons states not to proliferate nuclear capabilities and non-weapons states not to acquire or produce nuclear weapons. Another study underlines Aiken’s importance in bringing the dangers of nuclear proliferation squarely before the United Nations and by differentiating the goal of nuclear nonproliferation from nuclear disarmament. Aiken treated nonproliferation as an objective that had to be pursued separately, but that was also a step toward more sweeping measures to reduce and eliminate the nuclear danger.[1]

During the Eisenhower administration, Aiken’s proposal met both U.S. ambivalence and opposition. It made State Department officials uncomfortable because they did not believe that a nonproliferation agreement could be verified. Even more important was the concern that the resolution was incompatible with developing U.S. arrangements to share nuclear weapons with NATO allies in the event of a world war. Later seen at stake was the proposed NATO multilateral force. Thus, the State Department worried that the resolution would make the U.S. “vulnerable to attacks that we are in fact contributing to [the] spread of nuclear weapons through [the] NATO atomic stockpile program.” Yet, some did not like the idea of Washington voting against a nonproliferation, an idea that Lodge saw as a “real bell ringer in international politics.”

Not wanting to cast a negative vote that could damage the U.S. image, Washington abstained from the General Assembly votes in 1958 and 1960. In 1959, however, it supported Aiken’s resolution because it was procedural in nature and did not require specific U.S. approval of the content. The text referred the problem of nonproliferation to the U.N.’s 10 Nation Disarmament Committee which would study it and make recommendations.

In 1960, Ambassador Lodge recommended support of the resolution because the language was more consistent with U.S. policy but the State Department turned his advice down. By contrast, the Kennedy administration, also deeply concerned about nuclear proliferation, was more willing than its predecessor to work with Aiken on the text of the resolution. It recognized that he was not trying to undermine U.S. nuclear deployments and nuclear sharing arrangements with NATO countries. Indeed, Aiken was willing to accomodate to NATO interests to win the support of the United States and other alliance members.[2]

For Rusk’s State Department some tweaks in the language were enough to satisfy NATO interests.  One change related to the responsibilities of the nuclear powers: by changing not to “give” nuclear weapons to non-nuclear states to “not to relinquish control over” nuclear weapons. Nevertheless, the Dutch and other key NATO allies strongly lobbied for an additional tweak before they could vote for the resolution. Thus, in the language about the responsibilities of non-nuclear weapons states, the Netherlands proposed adding a word to the phrase: “calls all states not possessing nuclear weapons to undertake not to accept or make such weapons.” The British proposed, with the support of the Dutch and other NATO allies, inserting the word “control” after “accept.” The phrase “accept control” (with appropriate stylistic modifications) would protect nuclear sharing arrangements because it was the United States, not the non-nuclear NATO partners, that had custody and control over the use of the weapons. The U.S. and the British proposed “accept control” to the Irish and Aiken agreed.

The Irish resolution had competition: a nonproliferation resolution proposed by the Swedish government, which Washington opposed because it included language that was incompatible with NATO nuclear stockpile arrangements.[3] While Moscow supported and Washington opposed the Swedish resolution, both voted for the Irish resolution; it was the first time they voted the same way on an arms control issue at the United Nations, Cold War tensions over Berlin and other issues notwithstanding, Their support for the resolution, passed by acclamation at the General Assembly in December 1961, was a portent of future U.S.-Soviet understandings on nuclear test bans and nuclear nonproliferation, among other issues, although it would take a dangerous crisis over Cuba to make both sides more interested in such understandings.

The Nuclear Nonproliferation Treaty negotiated seven years later embodied the basic principles of the Irish Resolution, including treaty language tailored to accommodate U.S. nuclear deployments in NATO Europe. Ireland’s contribution to nonproliferation policy was evident at the three NPT signing ceremonies held on 1 July 1968 in Washington, London, and Moscow, with Irish diplomats attending all three. Frank Aiken was the first minister to sign the Treaty at the Moscow ceremony, later presenting Foreign Minister Andrey Gromyko with Ireland’s instrument of ratification, making Ireland the first country to ratify the Treaty.[4] 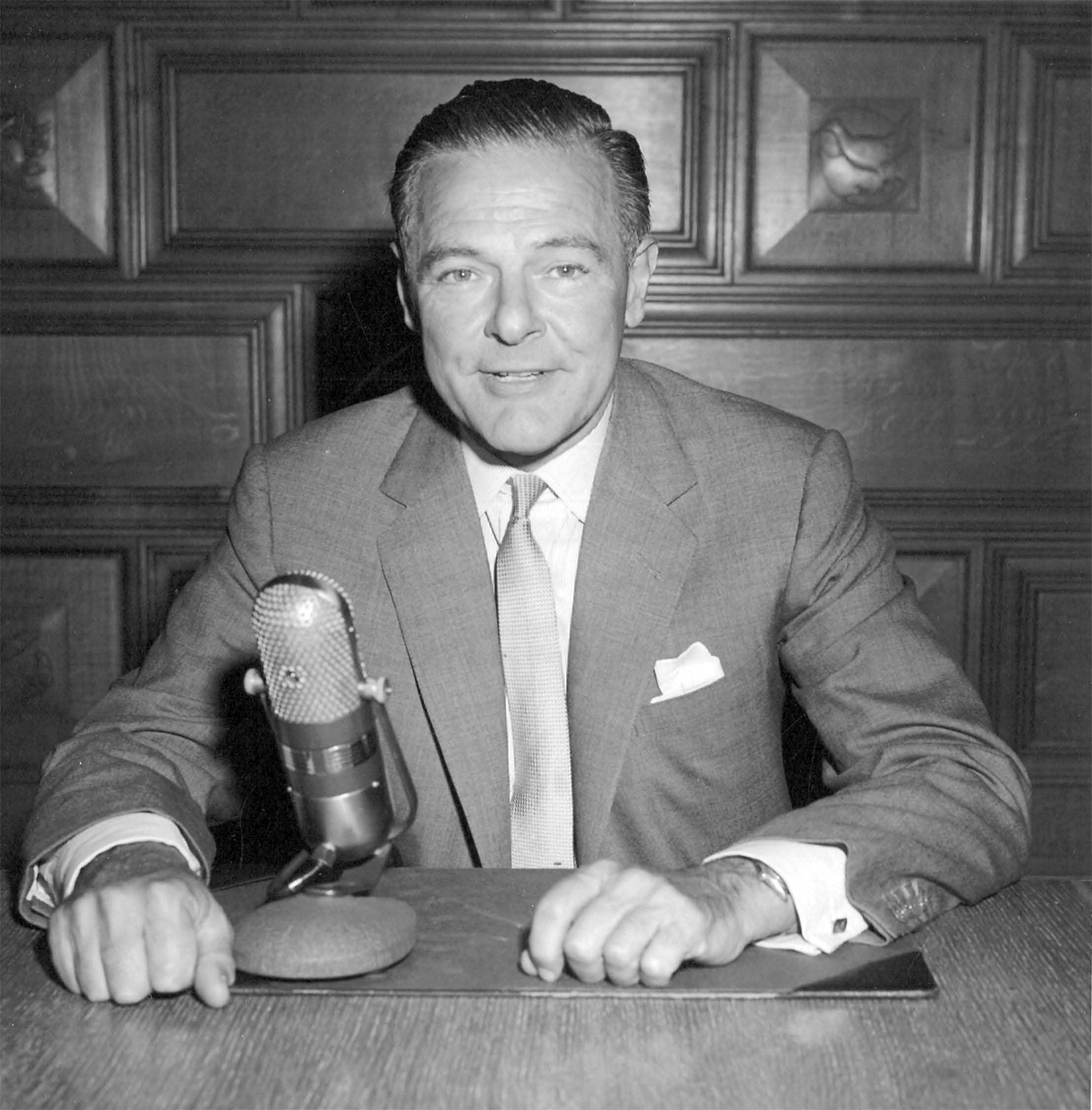 Ambassador to the United Nations Henry Cabot Lodge participating in a UN TV series “Dateline UN,” 29 September 1958.  Lodge was sympathetic to Aiken’s nonproliferation resolution, but could not persuade the State Department to support it in 1960 (Image from Still Pictures Branch, U.S. National Archives, RG 59-S0) 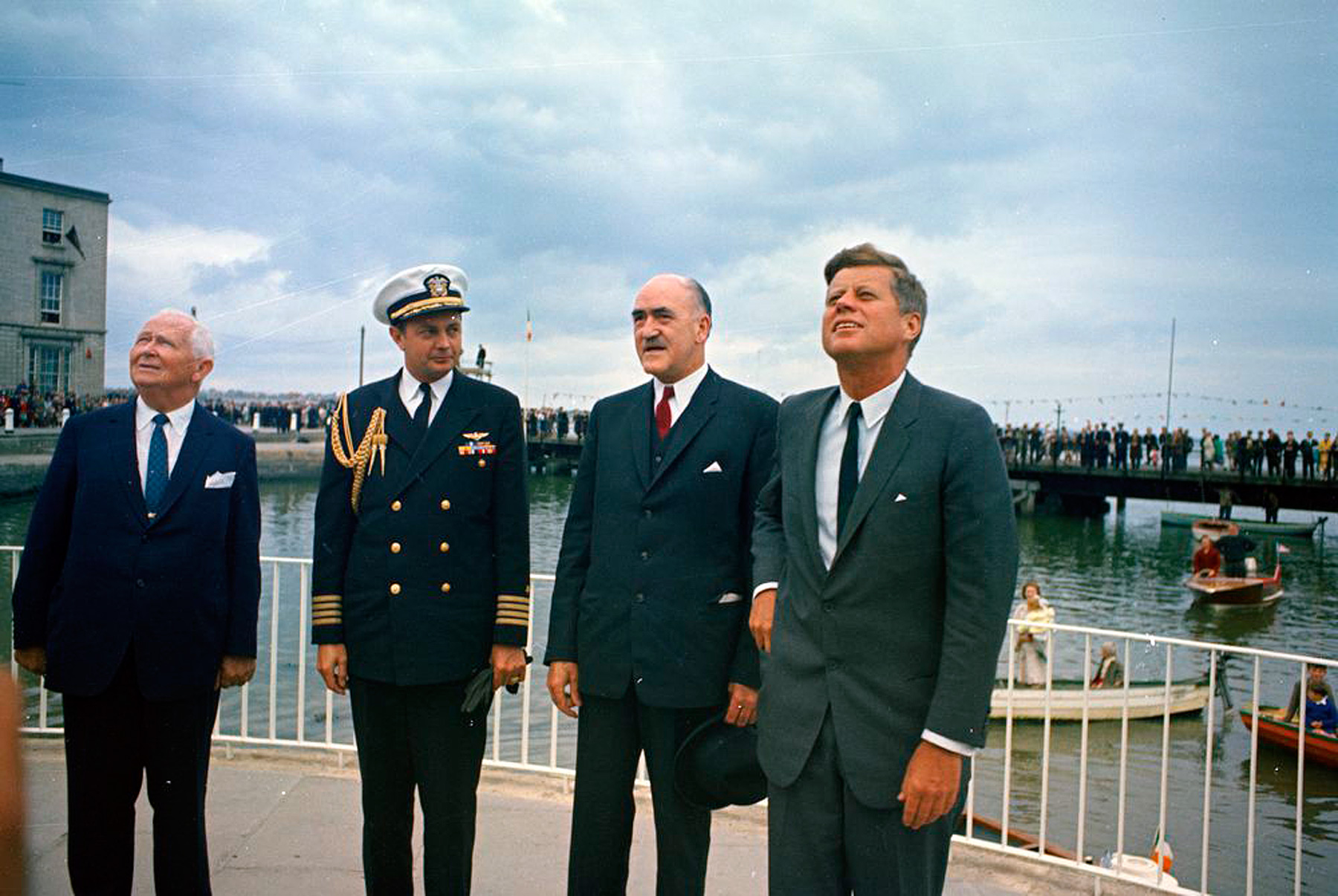 The White House left the 1961 negotiations over the Irish Resolution to the State Department and the Arms Control and Disarmament Agency, although President Kennedy met Frank Aiken during a visit to Ireland. On 27 June 1963, U.S. Ambassador Matthew McCloskey, Naval Aide Captain Tazewell Shepard, Aiken, and Kennedy visited the Commodore John Barry (USN) Memorial at Crescent Quay in Wexford, Ireland. Barry was a key figure in the creation of the U.S. Navy during the Revolutionary War. (Photo from John F. Kennedy Presidential Library, Accession Number KN-C29831)

[1]. Catherine Manathunga, “The Evolution of Irish Disarmament Initiatives at the United Nations, 1957-1961,” Irish Studies in International Affairs 7 (1996), 97-113; Evgeny M. Chossudovsky, “The Origins of the Treaty on the Non-Proliferation of Nuclear Weapons: Ireland's Initiative in the United Nations (1958-61),”Irish Studies in International Affairs 3 (1990): 116; Jonathan Reid Hunt, “Into the Bargain: The Triumph and Tragedy of Nuclear Internationalism during the Mid-Cold War, 1958-1970,” Ph.D. dissertation, University of Texas, 2013, 30. For a Soviet proposal that anticipated the NPT’s verification features, see Elisabeth Roehrlich, “Negotiating Verification: International Diplomacy and the Evolution of Nuclear Safeguards, 1945–1972,” Diplomacy and Statecraft 29 (2018): 33.  For Aiken's life and times generally, see Bryce Evans and Stephen Kelly, eds., Frank Aiken:Nationalist and Internationalist (Sallins, Ireland: Irish Academic Press, 2014).