60th Anniversary of Irish Resolution: A Forerunner of the NPT
October 29, 2018

The Nuclear Nonproliferation Treaty and the Mexican Amendments: The Negotiating Record
May 24, 2018

Washington D.C., April 10, 2020 - The NPT is appropriately acknowledged as a critical means of protecting global security against the danger of unchecked nuclear proliferation.  But the treaty has had its detractors – and not just among rogue states but governments in good international standing – as a new posting of declassified documents from the nongovernmental National Security Archive shows.

Drawing on declassified State Department cables and CIA studies, today’s selection provides context for a significant event in the life of the NPT – the 1995 Review and Extension Conference – where worries and concerns from both sides of the issue came to light in the course of debates that would determine the future of the 1968 treaty.

Non-nuclear weapons states pointed up the inequities of the existing system, mainly the failure of nuclear powers to follow through on their own obligations under the treaty to disarm and the fact that non-members who had developed weapons (not only Israel) had effectively escaped sanction.  Weapons-producing states, according to the documents, had their own concerns, including the possibility of new nuclear states upsetting the international balance but also demands from critics to “move to zero nuclear weapons” and provide wider access to nuclear technology.

In the end, the U.S., Britain, France, and Russia and many like-minded nations prevailed in their main goal of obtaining a permanent extension of the NPT.  Today’s posting gives a preliminary picture of the lead-up to the decisive 1995 conference.

The future of the nonproliferation system was at stake in the 1995 NPT Review and Extension Conference held in New York City. According to a CIA analysis, even though a clear majority of Treaty signatories supported indefinite extension of the NPT, opposition from the Non-Aligned Movement and the Arab League created the “risk of a bandwagon emerging at the Conference against indefinite extension.”  Events turned out otherwise, however, and the conference participants prolonged the life of the NPT in perpetuity.

The 25th anniversary of the 1995 conference to extend the Nuclear Nonproliferation Treaty makes it timely to publish for the first time recently declassified CIA reports concerning the 1995 conference and previously declassified State Department documents on its early planning.  Making it even more timely is the recent publication by the Nuclear Proliferation International History Project of a transcript of a 2018 conference in Rotterdam: Extending the NPT? A Critical Oral History of the 1995 Review and Extension Conference, edited by Michal Onderco and Leopoldo Nuti.

Today’s posting includes a selection of State Department telegrams from 1992-1993 when the initial planning for the 1995 Review and Extension Conference began.  Among them are accounts of meetings of the Vienna, Austria-based “Friends of the NPT” consisting of chiefs of missions to the International Atomic Energy Agency, which had been held over the years to “share and coordinate” thinking about NPT review conferences. Also included are records of meetings of the NPT “depositories,” the three states – the Russian Federation, the United Kingdom, and the United States – where signed originals of the NPT reside. Both groups wholeheartedly supported Treaty extension but the depositories group meetings were especially important for forming a consensus among, and developing plans of action by, those three influential states.

The Central Intelligence Agency closely monitored the convening of the 1995 conference and in the months and weeks preceding it prepared at least two detailed prognoses of possible outcomes, classified “Top Secret”. One of the intelligence memoranda, prepared in mid-November 1994, conveyed uncertainty about the conference’s outcome: a simple majority in favor of indefinite extension was possible, but enough opposition to that goal existed to make a 25-year treaty extension also possible.  The April 1995 estimate, discussed above, found a clear majority for indefinite extension but, as noted above, thought it possible that Arab League and Nonaligned Movement opposition could prevent that.  Opposition to indefinite extension was rooted in “widespread and longstanding grievances” that the United States and other nuclear weapons states had not followed through on the NPT’s Article VI disarmament obligations; moreover, the Treaty had had no impact on states that had developed nuclear weapons capabilities outside the Treaty, most prominently, but not only, Israel.  Another concern was that the supply of nuclear technology was constrained by nuclear suppliers’ arrangements, contrary to original expectations.

The grave uncertainties surrounding a vote at the Conference that the CIA emphasized decisively influenced the outcome. While it became clear that a vote would produce a majority for indefinite extension, Conference president Jayantha Dhanapala (whose preference had been 25 years) worried that a vote would be too divisive and, according to the fascinating NPIHP oral history, “used a lot of creative drafting to paper over the divisions which existed.” There was enough opposition from the NAM to make Dhanapala want to neutralize it by building support for three papers: “Principles and Objectives for Nuclear Nonproliferation and Disarmament,” a resolution on weapons of mass destruction in the Middle East, and “Strengthening the Review Process for the Treaty.” [1]

The NPIHP oral history provides an account of the negotiations over these papers, at least one of which, the nonproliferation principles, had strong South African support, thus putting the NAM somewhat off balance. That the paper did not include a timeline for nuclear abolition kept it from becoming a nonstarter as far as Washington and others were concerned, but it included a number of measures, such as a CTB and the fissile material cut-off, that it already supported.

The research for the NPIHP oral history of the 1995 Review and Extension Conference produced a valuable  collection of archival documents from German, European Union, and South African archival sources, along with oral history interviews that were conducted prior to the meeting in Rotterdam. State Department and White House documents about the lead-up to, and diplomacy during, the extension conference remain classified. Presumably, “Friends of the NPT” and the “Depositories” meetings continued after 1993, records of which could provide useful information on the U.S., British, and Russian positions as they developed. These issues will be the subject of further declassification requesting by the National Security Archive. 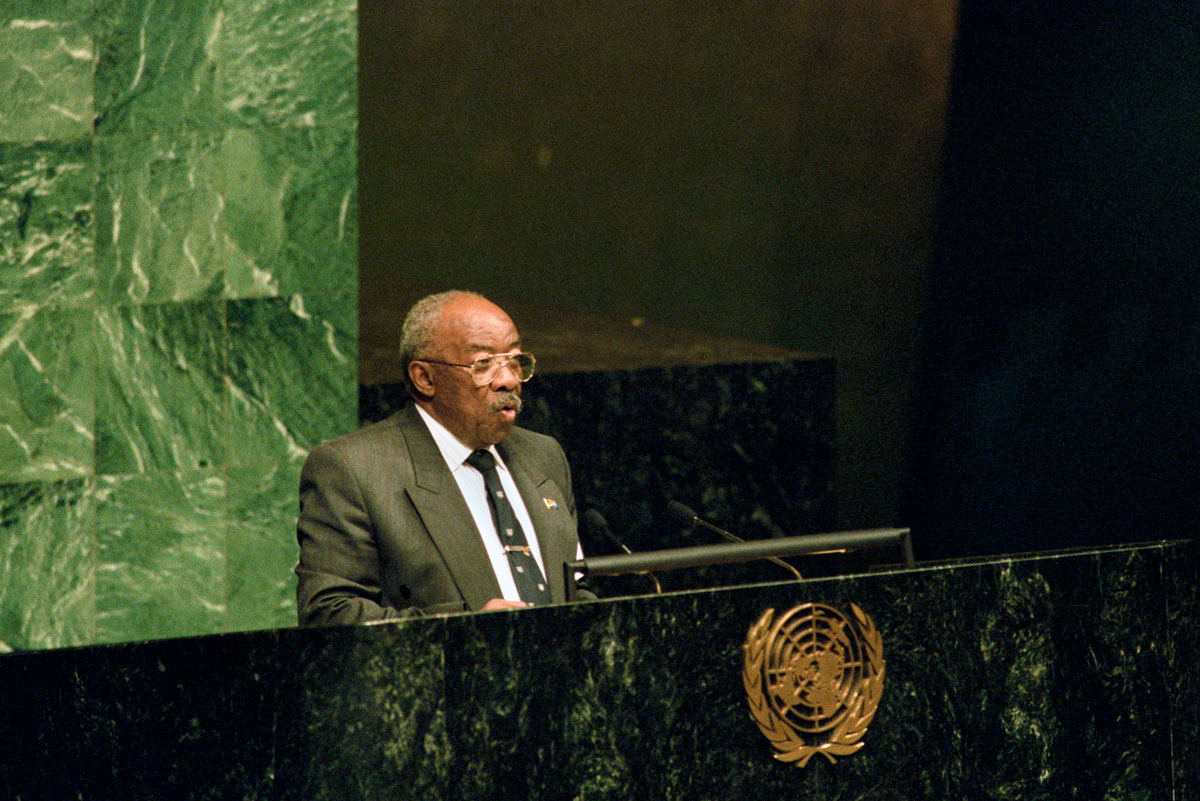 Alfred Nzo, foreign minister of South Africa, addresses the Review and Extension Conference in the U.N. General Assembly hall, 19 April 1995. Nzo would play a central role in developing the understanding that made indefinite extension of the NPT possible. (UN Photo Library, Photo # 297655).

[1] .   All three papers, and related documents, were published in the Conference’s Final Document, available on the IAEA Website.