An Air Force photo of an earlier version of the B61 nuclear bomb, which has been the mainstay of NATO’s nuclear stockpile. (Photo from Hill Air Force Base Website) 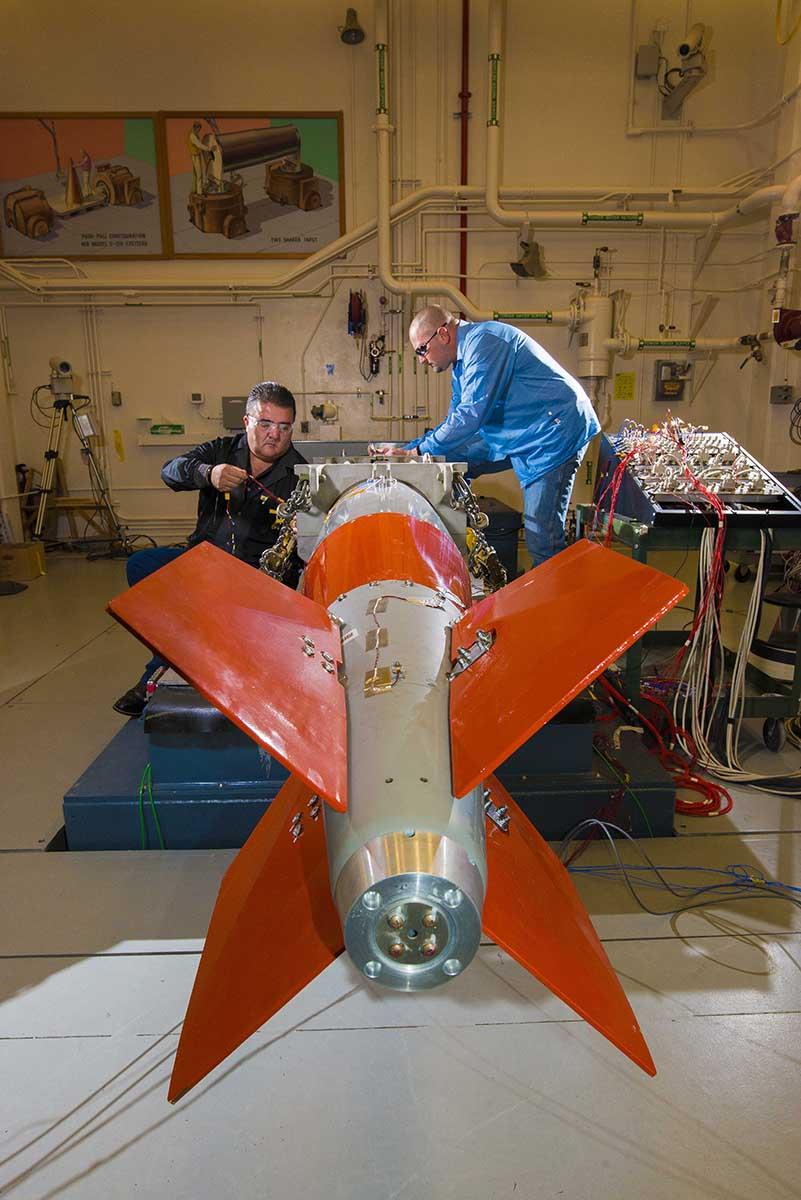 Washington, D.C., March 28, 2022 – Russia’s increasingly grueling invasion of Ukraine has given rise to chilling talk over whether the conflict might go nuclear, reminding the world that atomic weapons and their political and military importance remain a critically relevant public issue. A recent Washington Post article explored the weapon the West would be likely to turn to first – either for its political or military value – if and when the NATO alliance begins deliberating over a nuclear response. That weapon is the B61 bomb, which the U.S. has deployed in NATO Europe for decades and which has been a subject of ongoing debates over the alliance’s military posture.

The B61 bomb has a long history, going back to the middle years of the Cold War, with development work beginning in 1962.[1] The Post article by Dan Zak reviews the bomb’s history and its characteristics along with the controversy over whether NATO needs such weapons for deterrence.

As far as can be told, the declassified record does not include extensive detail on the development of the B61, but some of the documents that Zak cites, a 1969 symposium on tactical nuclear weapons held at Los Alamos and a 1975 memorandum to Henry Kissinger, provide some tidbits. Both are from the Digital National Security Archive, where other items provide such details as the B61’s relatively small size, light weight, and its selective yield feature.

The National Security Archive is posting them here today in order to make them more widely available to the public.

This report on areas of improvement for tactical nuclear weapons included a section on tactical systems that “could enter our stockpile in the next few years.” Two other weapons, including the Mk 61 bomb, which was the name for the B61’s first iteration, were already in the inventory and “should be considered for further production.” According to Secretary of Defense Foster, the Mk 61 was an “improvement” over other bombs already in the stockpile because it was “smaller, lighter, can be carried externally at high speed, and has a wide range [excised].” The excised phrase is likely about explosive yields or equivalent language; selective yields was an attribute of the B61 as it was developed.

This three-day conference brought together a large number of nuclear weapons specialists for a detailed look at the problem of tactical nuclear weapons, with a range of issues covered such as wartime use, command and control needs, service requirements, concepts of tactical nuclear warfare, what the Chinese and Soviet opposition had in the way of tactical weapons, and the use of Atomic Demolition Munitions (ADM), including the abandoned proposal for deployment in Turkey, and West German concerns about them. General David Burchinal, the deputy commander in chief of the U.S. European Command, mentioned the first iteration of the B61, the Mk 61, in a speech where he said it was the only “ improved tactical weapon [that] has entered the stockpile.” In another speech, Air Force Maj. General Otto J. Glasser said that “The recent decision to build additional Mk 61 bombs I feel is a good one.”

Burchinal did not mention whether the MK 61 concept included a “dial-a-yield” capability, enabling target planners to make a choice of explosive yield, but he cited it when discussing an earth penetrator weapon that would be “very effective against land or underground point targets requiring severe earth shock or cratering, such as bridges, missile silos, and runways.” A later-day variant of the B61 has an earth penetrating role, but whether officials in 1969 had that in mind is unclear. According to Burchinal, a weapon with flexible yields would be “effectively employed against targets near populous areas where collateral effects must be minimized.” With respect to bridges as targets, one participant, R.F. Rowntree, an official at the Navy’s China Lake Naval Weapons Center, observed he “might wish to look at the comparative cost of destroying the targeted bridges in East Germany using Mk 61 bombs, nuclear Walleye [an air-to-ground glide weapon] or conventional Walleyes.”

This interagency review of U.S. NATO policy closed with a general discussion of ongoing plans to update nuclear weapons deployed in Western Europe. The B61 is not mentioned in this summary that discussed actions to “modernize the current weapons stockpile, which is largely obsolescent in terms of limiting collateral damage and improve target acquisition capability as well as weapons accuracy.”

Nevertheless, there was a problem in making the weapons more effective militarily” and more credible threats. That was, “if not presented carefully, these efforts might be seen by some allies as evidence of decoupling.” In other words, the effort might give the impression that the U.S. was trying to avoid the use of strategic weapons and limit the battlefield to NATO Europe by using lower-yield weapons.

providing carefully controlled effects.” One method was the introduction of “dial-a-yield options including very low yields.” That is, lower yields to reduce civilian fatalities and casualties. This summary did not mention the B61, but the next document in this posting shows how it fits into the scheme of things.

The flexible yield B61 was one of the elements of Secretary of Defense James Schlesinger’s plan to upgrade nuclear forces deployed in NATO Europe. This report to Secretary of State Henry Kissinger explained that the Pentagon program included both modernization and reductions of the nuclear stockpile. A reduction of 1,000 weapons (from the near 7,000 total) would be a bargaining chip in the Mutual Balance Forces Reduction negotiations. Believing that other weapons could be eliminated because they no longer served a useful purpose, the Pentagon proposed a cut of another 1,000 for Nike-Hercules, anti-submarine weapons, and high-yield ADMs.

As part of the upgrade, the Pentagon proposed deployments of “new selectable-yield” B61 bombs, replacing some of the 1,600 tactical nuclear bombs already deployed on a “less than one-to-one basis.” Lance nuclear-tipped missiles would replace the old Honest John and Sergeant missiles. Moreover, Pershing missiles and Poseidon submarine-launched ballistic missiles would take over the target assignments of old nuclear-capable F-4 fighter-bombers

As Hartman and Stern suggested, “The Allies will scrutinize our proposals very carefully” because of their ongoing concern “that the US nuclear deterrent is being decoupled from the defense of Europe.” When he learned of the proposals for cuts Kissinger was quite critical, arguing that the “the perception in Europe would be adverse if we took them out..” Some of the proposals, such as reducing bomb numbers, fell by the wayside, but plans for the new B61 went ahead.

[1]. For a useful overview of the B61 and its early variants, see Hans M. Kristensen and Robert S. Norris, “The B61 Family of Nuclear Bombs,” Bulletin of the Atomic Scientists 70 (2014): 79-84. See also Hans Kristensen, “B61-12: First Pictures Show New Military Capability,” Federation of American Scientists Strategic Security Blog, 28 February 2014

US Nuclear Weapons in the Netherlands: A First Appraisal
Jan 15, 2021