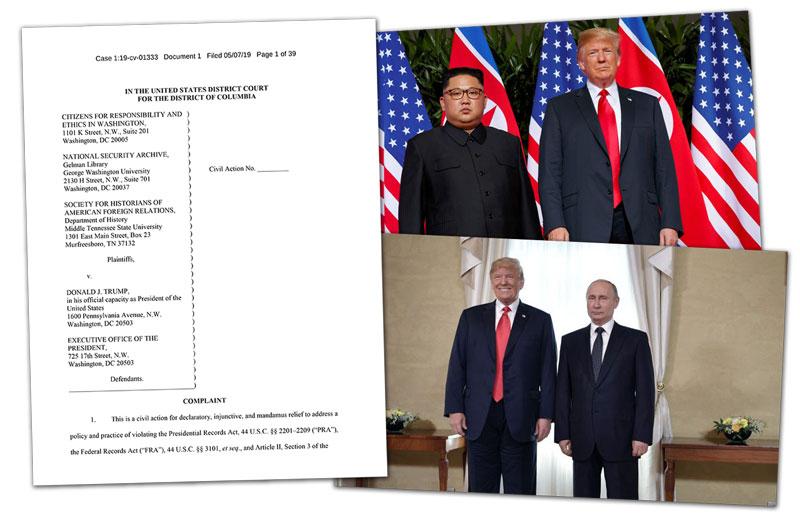 News Reports Indicate No Notes or Transcripts for Meetings with Putin, Kim, Saudis 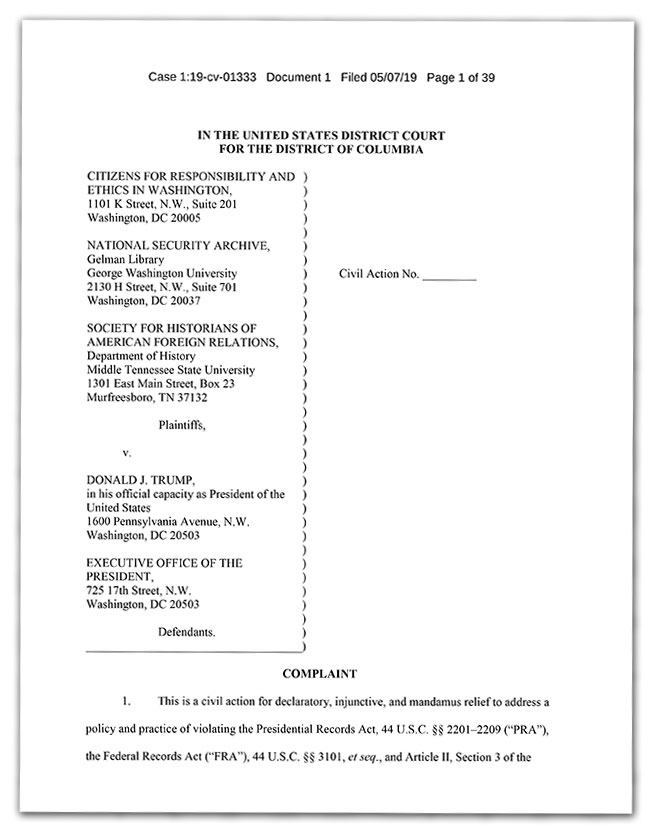 The Kissinger Transcripts: The Top-Secret Talks with Beijing and Moscow

Nixon's Nuclear Specter: The Secret Alert of 1969, Madman Diplomacy, and the Vietnam War

The Last Superpower Summits: Reagan, Gorbachev and Bush at the End of the Cold War

Washington, D.C., May 7, 2019 – The National Security Archive today joined Citizens for Responsibility and Ethics in Washington (CREW) and the Society for Historians of American Foreign Relations (SHAFR) in filing suit to compel the White House to create and preserve records of the President's meetings with foreign leaders.

News organizations have reported that in multiple meetings with foreign heads of state, the Trump administration has excluded note takers from the conversations.  For example, The New York Times on January 15, 2019 headlined "Trump and Putin Have Met Five Times, What Was Said Is a Mystery."  The Associated Press reported on February 27, 2019, "Trump-Kim go one-on-one: Who will know what was really said?"

The lawsuit filed today asks the federal district court for mandamus and declaratory relief to compel the White House to create and preserve records of presidential meetings with foreign leaders, as required by the Presidential Records Act.

The National Security Archive has obtained through the Freedom of Information Act and published thousands of "memoranda of conversation" of heads of state meetings dating back to President Eisenhower and forward to President Clinton's 1999 telephone call with Russian President Boris Yeltsin in which Yeltsin announced his successor would be Vladimir Putin.

Archive director Tom Blanton commented, "The Archive went to court to preserve presidential records when President Reagan tried to junk his email backup tapes in 1989. We have sued every president since, Democratic and Republican, to make sure the White House obeyed the records laws.  Today, the problem goes beyond improperly shredding records, to the deliberate failure to create the records in the first place."

SHAFR president Professor Barbara Keys remarked, "Keeping records of top-level meetings has been part of common-sense diplomatic practice for centuries. Failing to make or keep records damages not only the capacity of history to render judgment in the future, but also of government to pursue the country’s interests in the present.  It also undermines the principle of government accountability that is the very bedrock of democracy."

CREW executive director Noah Bookbinder said, "It is clear that President Trump and White House officials have gone to great lengths to hold high-level meetings with foreign governments and carry out foreign policy objectives while blatantly ignoring recordkeeping laws and preventing national security officials and the American people from understanding what they are doing.”

The legal team representing the plaintiffs in the case is led by Anne Weismann of CREW, together with Conor Shaw of CREW, and pro bono counsel George Clarke, Mireille Oldak, and Steven Chasin of Baker McKenzie.

Trump sat down with Putin at G20 without US note-taker
Financial Times
January 29, 2019

Trump and Putin Have Met Five Times, What Was Said Is a Mystery
New York Times
January 15, 2019

Trump has concealed details of his face-to-face encounters with Putin from senior officials in administration
Washington Post
January 13, 2019

Trump and Kushner Broke the Law in Meetings with Putin and Saudis
CREW
May 7, 2019