Hagelin and Friedman: The Gentlemen’s Understanding Behind “The Intelligence Coup of the Century” 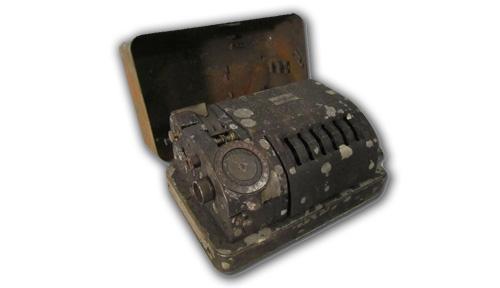 Washington D.C., February 19, 2020 - Reporting last week in The Washington Post and Germany’s ZDF public television channel mentioned a 1951 meeting between Crypto AG’s Boris Hagelin and American cryptographer William Friedman, the noted cryptanalyst who was acting as a representative of U.S. intelligence, at Washington D.C.’s Cosmos Club. This meeting reportedly built the foundation of a “gentlemen’s understanding” between Hagelin and the United States to control the company’s cryptographic devices. This agreement would ultimately lead to the joint CIA/BND purchase of Crypto AG upon Hagelin’s retirement in 1970.

Documents from William Friedman’s collection shed light on the years before Hagelin’s retirement and the level of cooperation between the two men. Discussions begin on the issue of surplus M-209 cryptographic devices, designed by Hagelin, in the aftermath of World War II (Documents 1, 5, 6). Both sides sought to control this surplus stock, U.S. intelligence agencies to restrict cryptographic capability to friendly nations, and Hagelin to avoid flooding his own market. As these discussions evolve, the topic of Crypto AG’s improved CX-52 devices is raised (Documents 9, 10, 11). A memorandum from the United States Communications Intelligence Department (USCID), obtained through FOIA, authorizes Friedman to make a proposal to Hagelin (Document 8) during a trip to Crypto AG’s headquarters in Zug, Switzerland, which is detailed in Friedman’s papers (Documents 13, 14). This proposal, accepted without delay by Hagelin, is believed to be the first agreement between Crypto AG and the United States to intentionally limit the effectiveness of cryptographic equipment sold to certain customers.

While the specific method by which the CX-52 was limited is unknown, documents from Friedman’s collection support the theory that different versions of instructional materials were provided to different “tiers” of CX-52 customers, altering the strength of the machine’s encryption in practice. Letters reveal instructional material was being provided to Crypto AG from external sources (Documents 17, 23) and the U.S. was kept informed of the company’s sales and marketing efforts, particularly through Boris Hagelin’s son, Boris Jr, known as “Bo” to Friedman.

Later correspondence reveals that Boris Hagelin began to feel limited by this arrangement, particularly with regard to his ability to compete with the German technology giant, Siemens (which would later play a key role in the CIA’s ownership of Crypto AG), in a range of nations (Documents 19, 20).

William Friedman retired in 1958, at which point others within the U.S. intelligence community took up correspondence with Crypto AG’s leadership. The documents from Friedman’s collection were initially donated to the George C. Marshall Foundation Library by Friedman and his wife, Elizebeth, herself a remarkably accomplished cryptanalyst listed in the NSA’s Cryptologic Hall of Honor as “America’s first female cryptanalyst.” Both avid Shakespeare enthusiasts, the couple would also come to be known jointly for cryptologic analysis into claims that the bard had not written the plays which were attributed to him.

The document collection was found by author James Bamford while conducting research for the 1982 book Puzzle Palace. The U.S. government argued that these documents had been released in error and reclassified them under EO 12356, a move that was challenged unsuccessfully in court by the American Library Association. The collection has since been re-released and is available through The George C. Marshall Foundation and the National Security Agency.

The United States was left with large stockpiles of Hagelin’s M-209 cryptographic devices at the end of World War II. There was a great deal of discussion about the control of these devices, distributed to Allied nations during the war. This distribution posed a potential security threat as at the time the M-209 was the standard-issue frontline encryption device used by the U.S. Army. Of note is point 5 which mentions the development of a more secure means of using the M-209 which was a "purely U.S. development," and point 9b, which recommends "no further issue of the Converter M-209 or any associated instructional documents be made to foreign nations or to military missions for instruction of foreign military personnel."

The relationship between William Friedman, an accomplished cryptographer and NSA special assistant, and his friend Boris Hagelin, the founder of Crypto A.G., can be seen from the series of documents referencing Friedman's visits to Hagelin's factory in Zug, Switzerland. Here Friedman informs colleagues at the NSA about an upcoming trip to Zug.

This communication between Mr. Stuart Hedden and General Ralph Canine (the first director of the NSA) mentions the existence of an open dialogue between intelligence entities, including William Friedman, and Boris Hagelin.

Friedman and Hagelin’s letters suggest a close personal friendship in addition to their professional relationship. This communication from Hagelin to Friedman is illustrative of their correspondence: A friendly greeting, an exchange of personal information, and page upon page of restricted information. Of note, this letter mentions a visit by the Hagelins to Washington, D.C. in or around 1953, which is after the "gentlemen's understanding" between Hagelin and the U.S. intelligence community is thought to have begun.

Correspondence from William Friedman to Boris Hagelin. May 24, 1954. Secret.
Source

As a key figure in the world of cryptographic machines, Hagelin (who had invented the M-209 for the use of the American government as a part of the war effort) had an interest in acquiring surplus M-209 devices. This letter from Friedman references delays in this process.

Concerns about the export of the M-209 complicated the ability to sell off surplus U.S. government stores. In this document Friedman reveals that the U.S. sought to keep the machines out of the "wrong hands." He also informs Hagelin that, in selling off the M-209s, they would have to follow protocol and accept the offer of the highest bidder, possibly precluding a "sweetheart" deal for Hagelin to acquire the devices at a low cost.

This letter from William Friedman to Boris Hagelin, Jr. (affectionately referred to as "Bo") mentions a trip by Friedman to Zug, the headquarters of Crypto A.G.

This memorandum from the U.S. Communications Intelligence Board (USCIB) authorized Friedman to make a proposal to Hagelin during an upcoming trip to Zug.

Friedman further discusses with Hagelin his upcoming trip to Zug and mentions the U.S. government's orders of C-52 and CX-52 converter kits. Friedman also references in the post script steps he took to ensure the employment of “Miss Barth,” possibly a gesture to Hagelin as a part of their Gentlemen’s Understanding.

In this follow-up to the letter from January 7, 1955 (Document 9), Friedman asks about Hagelin's lack of response to the expedited shipment of the new CX-52 to Friedman. Along with this reminder is a request for the operating instructions for the new machine.

This letter served as a further request for delivery of the new cryptographic machines and instructional materials.

In February 1955, Friedman made an official visit to the Crypto A.G. headquarters in Zug, Switzerland. This rough draft of Friedman's report summarizes this visit and goes into some of the particulars of their meeting. Of note is the outline of the new Crypto A.G. machines and the countries which have acquired them, and the implication that non-NATO-aligned countries were able to purchase the C-52, but not the more secure CX-52. An account of the proposal authorized by the USCIB memorandum begins on page 29.

This is Friedman's final draft of his report of his trip to Zug. There are differences in redaction between this and a previous version (Document 13).

Friedman's quest for a sample of the new Hagelin machines led him to arrange delivery of one of the C-52 devices to a U.S. Air Force Attaché acting as intermediary. This letter confirms this arrangement with Bo Hagelin.n.

Further details of Friedman's struggles to obtain a sample C-52 are laid out in this letter to Boris Hagelin.

Friedman received one of the new Hagelin machines, but it was a CX-52 rather than the C-52 he had requested. Of note is Friedman's mention that he is preparing an instructional booklet for the CX-52, rather than allowing the booklet to be prepared by a Crypto A.G. employee.

The C-52 and CX-52 were exceedingly popular devices globally. This package of documents is a collection of photographs of Bo Hagelin's passport, Bo's handwritten letters, a price sheet for the CX-52 and accessories, the business card for an agent of Hagelin's in South America, instructions for the Hagelin Pocket Cryptographer (Type CD-55), and other assorted documents.

This communication to General Ralph Julian Canine, the first Director of the NSA, from Friedman contains an excerpt from a letter Friedman had received from Hagelin. In it, there is discussion of the role of Siemens in developing new technologies to use alongside Crypto A.G. machines and their potential distribution of that technology to Egypt (which, it is mentioned, would displease NATO). Hagelin voices concern over Crypto A.G.’s ability to compete against Siemens in a range of nations under the terms of his and Friedman's "gentlemen’s understanding."

In 1957, Friedman made another trip to meet Hagelin in Zug. Of note: Siemens has apparently sold some of their advanced OTT Teleprinter technology to Egypt, Yugoslavia (2b), and India (3c); there is some concern over the electromagnetic and acoustic radiation produced by the Hagelin machines (5b-c); the development of a new line of machines which offer differing levels of security, which will allow "west-oriented countries" to have higher levels of encryption than "friendly neutral countries... Finland might be considered one such country," and "countries of doubtful orientation or countries leaning toward the USSR block...Indonesia, India, Egypt, and all near east countries" (6a); instructions provided with each security tier of the Hagelin machines will be distinguishable through "secret marks printed thereon" (6b); the origin of this tiered encryption was NATO (6m); The French government has asked Hagelin to "refrain from selling certain of his products to Arab countries" (7d); Hagelin is increasingly chafing under the sales regulations of the "gentlemen's understanding" and is considering selling Crypto A.G. to Siemens (9b); and friction between Bo and Boris Hagelin has been growing, and Friedman is concerned that Bo is divulging "instructional literature about cryptographic communications, the use of insecure crypto-equipment, and the faulty use of good equipment” (9c-d).

This letter from Boris Hagelin mentions the financial situation of Crypto A.G.

This letter from Friedman to Hagelin mentions the development of instructional information for Hagelin devices by cryptographers from outside Crypto A.G.

In this letter to Friedman, Boris Hagelin mentions that Bo is preparing to travel to Ciudad Trujillo (modern-day Santo Domingo), Dominican Republic, to sell machines, indicating his standing as a major component of Crypto A.G.'s sales team in the Americas.