The National Security Archive, the Knight First Amendment Institute at Columbia University, and the Citizens for Responsibility and Ethics in Washington file a FOIA lawsuit for the Trump White House visitor logs. 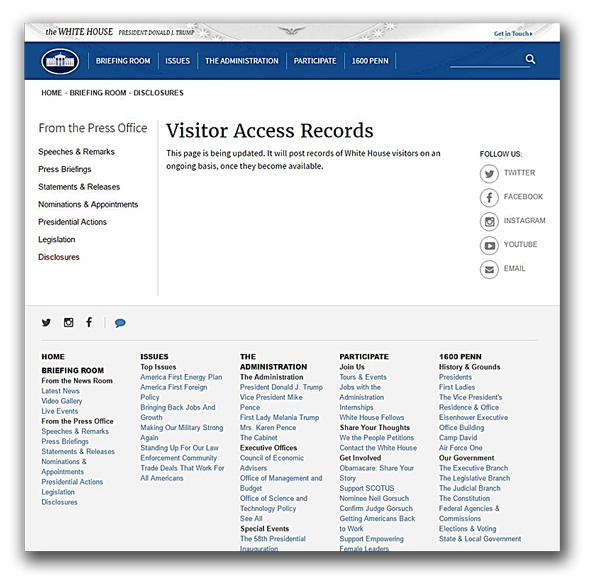 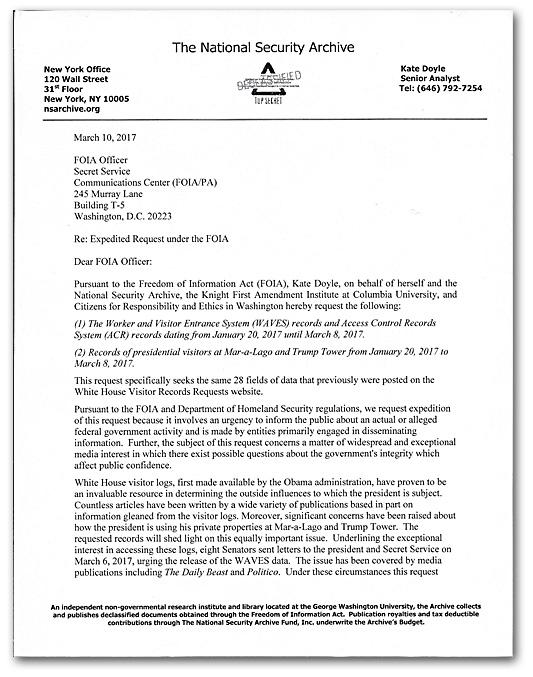 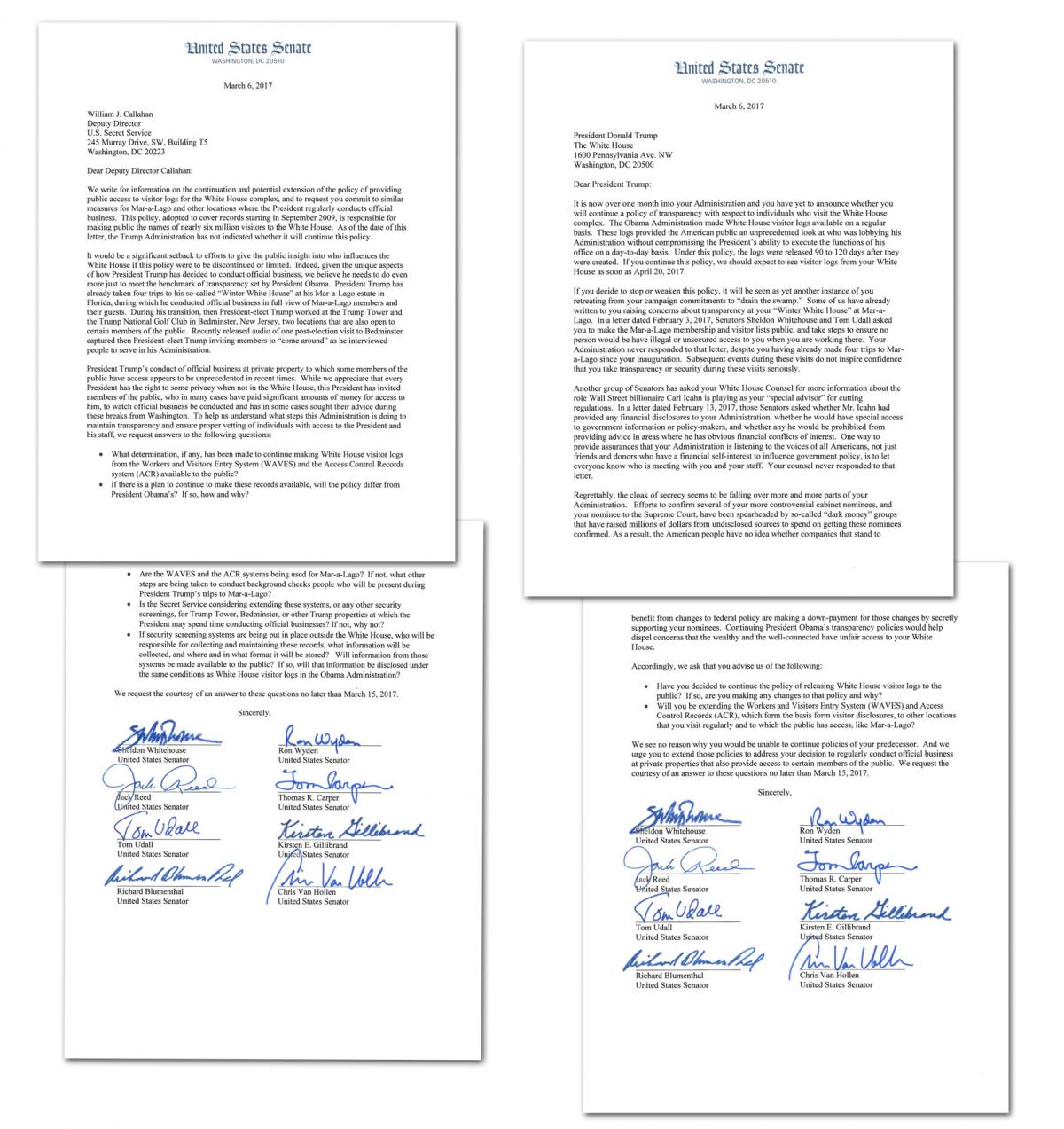 A group of senators sent both Trump and the Secret Service inquiries about the lack of transparency around the White House visitor logs on March 6.

Washington, D.C., April 10, 2017 – The National Security Archive, together with the Knight First Amendment Institute at Columbia University and the Citizens for Responsibility and Ethics in Washington (CREW), filed a Freedom of Information Act (FOIA) lawsuit against the Department of Homeland Security for the release of the White House visitor logs today, April 10, in the federal District Court for the Southern District of New York. The case, number 1:17-cv-02542-KPF, is assigned to Judge Katherine Polk Failla.

The Obama White House regularly posted visitor logs, complete with 28 fields of information about the visits.

The Trump administration, as of today, appears to have discontinued the practice, prompting the National Security Archive, the Knight First Amendment Institute, and CREW to file our suit, Doyle v. DHS.

“I filed my first FOIA request for these logs on the Monday after the inauguration with an attached example from a Mexican delegation that visited Obama,” says the Archive’s Kate Doyle. “When foreign officials go to see the President or his staff, the American people have a right to know who and when.”

Doyle followed up with a March 10 request, jointly submitted with the Knight First Amendment Institute, CREW, and the National Security Archive, asking the Secret Service for the White House visitor logs dating from Inauguration Day through March 8. This request included visitor logs for Mar-a-Lago and Trump Tower and specifically sought only the same 28 fields of data that were published on Whitehouse.gov for seven years without incident.

The Secret Service never responded to either of Doyle’s FOIA requests, prompting the FOIA lawsuit.

The letter to the White House asks if President Trump has decided whether or not he will continue the policy of releasing the visitor logs, and if he will use the same WAVES and ACR systems for other locations he regularly visits – like Mar-a-Lago. Both letters requested a response by March 15.

Rep. Mike Quigley (D-Ill.) noted in an article for The Hill on March 30, 2017, that the Trump administration had not responded to the Senators’ queries. Quigley cited this lack of transparency as the reason Democrats in both the House and Senate introduced the Making Access Records Available to Lead American Government Openness Act (MAR-A-LAGO), which would require the Trump administration to create a publicly available database of visitor logs to the White House “or any other location at which the President or Vice President regularly conducts official business.”

White House press secretary Sean Spicer told reporters on March 27 that the White House was reviewing whether or not it would continue the Obama administration’s policy of releasing the visitor logs. Spicer’s comment came in response to a series of questions concerning Rep. Devin Nunes’ visit to the White House to review classified information a day before he announced that members of President Trump’s transition team “may have been ‘incidentally’ caught up in foreign surveillance by American spy agencies.” Weeks earlier, on March 7, Spicer similarly said that the administration was “currently evaluating our procedures” on releasing the visitor records.

Access to White House visitor logs during the Obama years helped break a variety of stories. Logs shed light on “Google’s Remarkably Close Relationship With the Obama White House” by showing that Google lobbyist Johanna Shelton visited the White House no fewer than 128 times, far more than her peers from other tech companies, and that “Between January 2009 and October 2015, Google staffers gathered at the White House on 427 separate occasions.”

Visitor logs also revealed that then-CEO of Exxon Rex Tillerson visited the Obama White House at least 20 times in 2014 to advocate against the Russian sanctions.

Despite the 2009 CREW settlement, Judicial Watch sued for a binding determination on the status of visitor logs as agency records. A 2011 District Court opinion for the D.C. Circuit authored by Judge Beryl Howell in Judicial Watch’s suit found that they are “agency records” under the FOIA.  However, a 2013 appeals court decision authored by Merrick Garland overturned the lower court’s decision, finding that “the president’s constitutional right to confidential communications means FOIA doesn't apply to visitor logs kept by the Secret Service, even though a standard four-factor analysis of whether the logs are ‘agency records’ subject to FOIA was favorable to Judicial Watch.”

The D.C. Circuit precedent does not necessarily apply to other circuits.

The Archive suit seeks to establish that the visitor logs are agency records subject to the FOIA. “President Obama routinely released the data we're seeking with no damage to presidential privilege,” said the National Security Archive’s Director Tom Blanton, “and this information is central to the Secret Service mission and thus clearly agency records subject to FOIA.”

“This is a case about the public’s right to know who wields influence over the most powerful office in our government,” said the Knight First Amendment Institute's Alex Abdo. “In our view, the Freedom of Information Act requires the government to make this information available to the public.”

“We hoped that the Trump administration would follow the precedent of the Obama administration and continue to release visitor logs, but unfortunately they have not,” CREW Executive Director Noah Bookbinder said. “Given the many issues we have already seen in this White House with conflicts of interest, outside influence, and potential ethics violations, transparency is more important than ever, so we had no choice but to sue.”

“White House Won’t Say If It Will Release Names of Visitors,” by Lachlan Markay, The Daily Beast, March 7, 2017

“The Trump White House Has a Position on Disclosing Its Visitor Logs: Silence,” by Andy Kroll,  Mother Jones, March 6, 2017