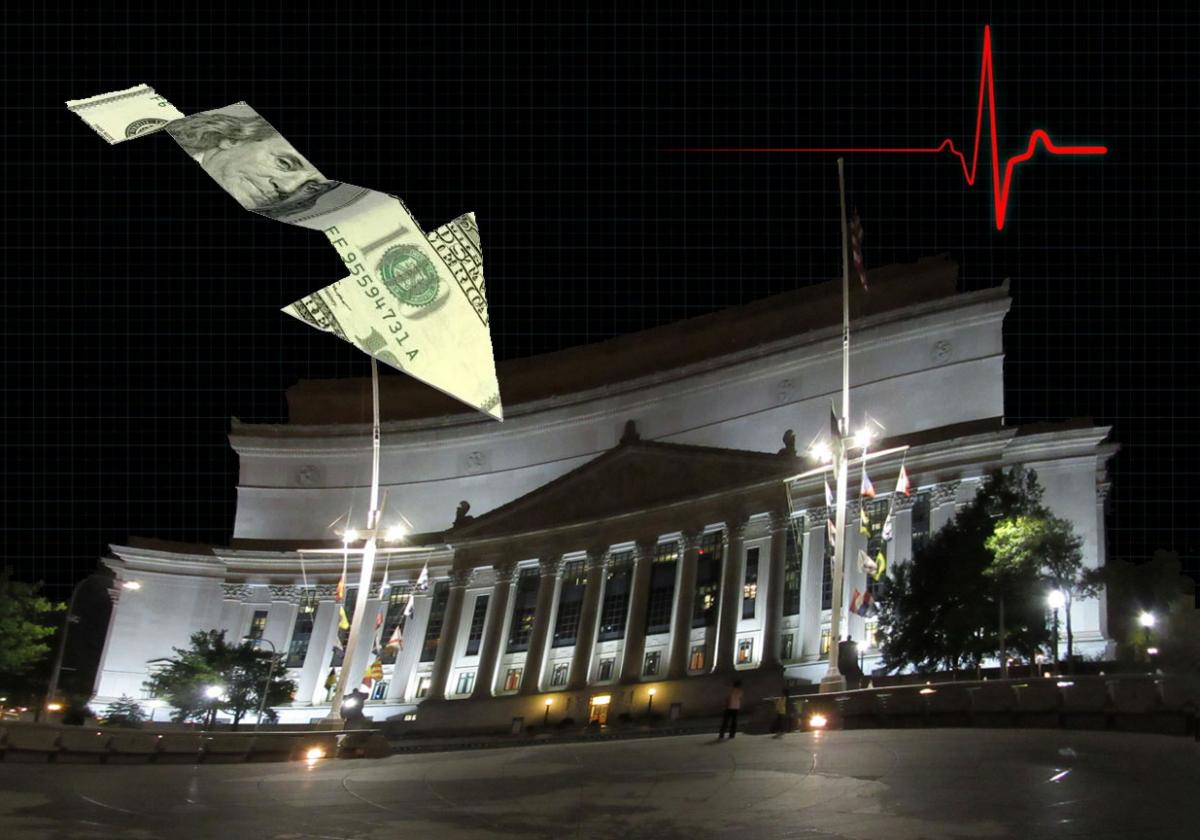 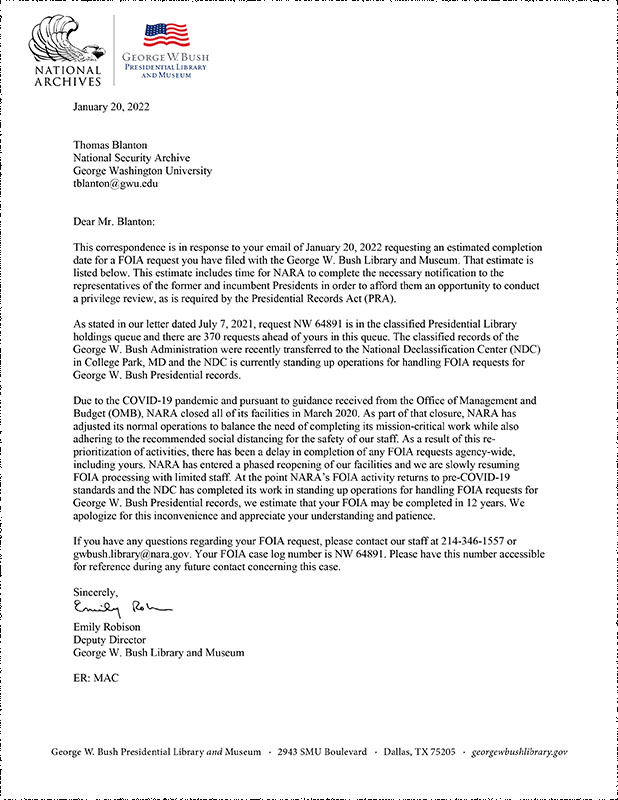 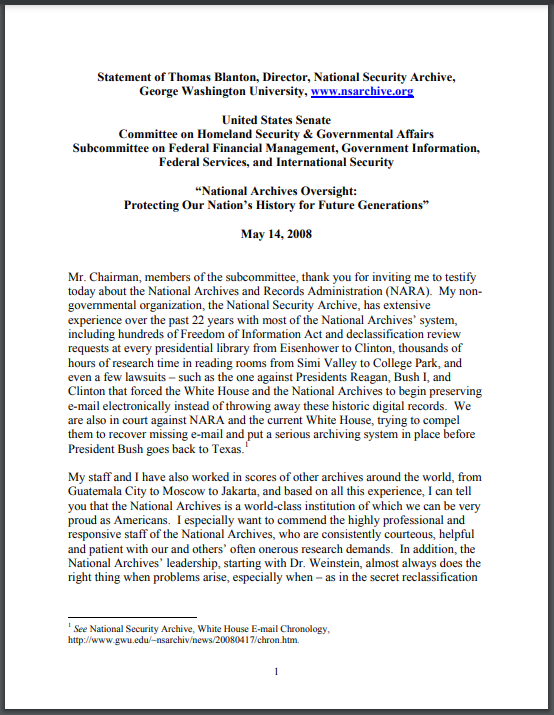 Washington, D.C., March 11, 2022 - The National Archives and Records Administration’s (NARA) budget has remained stagnant in real dollars for nearly thirty years. At roughly $320 million dollars when adjusted for inflation, its budget represents 0.0076% of the federal budget — this according to a National Security Archive Audit released today to mark the beginning of Sunshine Week.[1]

While its budget has flatlined, the number of records NARA must preserve, particularly electronic records, has increased exponentially over three decades. The George H.W. Bush Library, for example, has 20 gigabytes of electronic records in its holdings, whereas the Obama Library has 250 terabytes.[2] This explosion of electronic records is a huge part of the growing backlog for Freedom of Information Act (FOIA) and Mandatory Declassification Review (MDR) requests at the presidential libraries, which constitute only part of NARA’s holdings.

A recent letter to our office from the George W. Bush Library encapsulates the gravity of the crisis: in response to an estimated date of completion query for a FOIA request, the library replied “we estimate that your FOIA may be completed in 12 years. We apologize for this inconvenience and appreciate your understanding and patience.” (Emphasis added.)

NARA is stretched too thin in normal times, and its insufficient budget and statutory authority were no match for the Trump administration’s disdain for records management. From a President who regularly destroyed records, to executive branch agencies like the Department of Interior and the Environmental Protection Agency that followed Trump’s lead, it was hard-pressed to protect government records in real time.

Now is a critical time for the agency to course-correct. The current Archivist of the United States (AOTUS), David Ferriero, will step down in April after 12 challenging years on the job. President Biden has an opportunity now to pick a successor who builds on Ferriero’s successes, like strongly supporting the Office of Government Information Services and maintaining a good relationship with the public to help improve NARA’s services. Above all, President Biden must also choose someone who will loudly advocate for a budget that reflects the critical services NARA provides, and will take full advantage of all of the agency’s statutory authority, and push for more. This will help ensure that NARA functions like the nation’s living memory and back-up hard drive, rather than an attic for old documents. Without these qualities, NARA will continue to be underwater, and the public’s access to its records and a full accounting of its history will remain in serious doubt.

NARA’s current budget is a recipe for disaster for an agency whose outsized responsibilities include: preservation of government records (which includes more than 13 billion pages of textual records alone and hundreds of terabytes of electronic records); providing public access to its holdings; running a government-wide records management program: maintaining a sprawling network of records facilities; and administering the presidential libraries.

Budget woes are not new for the agency. There have been seven Archivists of the United States (including three acting) since the agency gained independence from the General Services Administration in 1985. The agency has been given more responsibility in that time (in the form of more presidential libraries and standing up the National Declassification Center), and few additional resources.

The chart below, which was compiled by obtaining NARA’s gross total outlays in a given fiscal year (FY) and then adjusting the figures for inflation using a budget deflator (which used FY2012 as a baseline), shows how little the budget situation has changed.

Budget Shortfalls at the National Declassification Center and the Presidential Libraries

Decreasing budgets and staffing shortages hamper some of the most critical offices within NARA, particularly at the National Declassification Center (NDC) and the presidential libraries. The chart below shows the total budget requested for NARA’s “Legislative, Presidential Libraries, and Museums” program – for which the presidential libraries make up the bulk of total costs – and the NDC. These figures have also been adjusted for inflation.

The National Declassification Center was established during the Obama administration to streamline the declassification process and improve the release of historically valuable permanent records. It is responsible for processing tens of millions of pages, many requiring declassification processing and/or review annually, and developing processes to review more than *198,000 cubic feet* of classified paper records, as well as large volumes of classified electronic records. Its budget in real dollars has decreased steadily in the time since NARA began reporting the amount requested for the Center, which has only 58 employees to carry out this task (its FOIA/MDR staff has only 8 people, meaning there are more presidential libraries than declassifiers).

Staffing is certainly not the only challenge the NDC faces. The extraordinary inefficiency of current declassification procedures is another large problem. The NDC also must be granted the authority to declassify any record over 25 years old on its own (as long as declassification does not impair confidential sources and nuclear weapons details or personal privacy) and stop the current wasteful equity referral and consultation re-review process, wherein multiple reviewers from multiple agencies are allowed to re-review the same document multiple times. The rule should be that if agencies wish to participate in NDC reviews of 25 yeard old or older documents, that they be required to detail employees to the NDC to help the process, and if agencies balk at this necessary shift and try to hold onto their historical records, there should be a statutory provision prohibiting them from hoarding their records 50 years old and older. Furthermore, for the sake of ensuring reasonable public access, NARA and the NDC must also take the Public Interest Declassification Board’s recommendation and discontinue “pass/fail” review, which means a single word in a historical record can doom the entire document to “fail” to qualify for declassification.

Presidential libraries, and those trying to access their records, are also impacted by these shortages. Currently, when a requester submits a FOIA to the libraries, they must wait (often years) only to be told that the documents they requested are classified and need to be requested again under Mandatory Declassification Review, which also often takes years. With adequate resources, the NDC could be systematically and proactively declassifying these documents, which are the highest-level documents in the government and very likely to be of the most public interest, without forcing customers to submit painstaking FOIA and MDR requests.

Staffing issues play out in less obvious ways, too. One pernicious example is that it results in limited oversight of agency records retention schedules.  These are the forms every agency must submit to NARA that, if approved, allow the agency to destroy information or withhold it for unreasonably lengthy periods.  Numerous alarming approvals of dangerous records retention policies point to NARA’s limited oversight capabilities. They include:

Not only are these not isolated incidents, they account for only part of the problem of historical materials being lost to the American people – a problem greatly exacerbated by the lack of resources for oversight. NARA’s “unauthorized disposition of federal records” chart catalogs all of the cases NARA investigated concerning the “actual, impending, or threatened unlawful removal, defacing, alteration, corruption, deletion, erasure, or other destruction of records.” A quick look shows that the departments of State, Interior, Agriculture, and Justice are frequently investigated agencies, and that improperly disappearing records and encrypted messaging applications are a common theme.

Limited oversight capabilities also make it far more difficult to ensure that agencies comply with records management policies, like guidance on managing all email electronically and managing all permanent electronic records in electronic format, which were the subject of the Archive’s Sunshine Week audits in 2016 and 2018 respectively.  Our audits contradicted agencies’ self-reported assessments and results – which NARA had been unable to independently verify – and agency responses showed that FOIA requesters are often not seeing the benefit of any improved electronic records management.

Our audits make clear that NARA needs to actively oversee the electronic records management process, as opposed to taking agency self-assessments at their word.

The next AOTUS needs more than just resources, they will need to maximize the authority they have and be granted more.

One of the most frustrating episodes of Ferriero’s tenure concerned the Senate Intelligence Committee’s full, scathing report on the Central Intelligence Agency’s torture program. Despite pleas from the public and Members of Congress, Ferriero refused to use his clear statutory authority to label the report a federal record, which would have made it subject to Freedom of Information Act disclosure requirements.  Ostensibly, this was because the Justice Department told NARA not to. According to a November 5, 2015, letter written by Senators Patrick Leahy of Vermont and Dianne Feinstein of California, “personnel at the National Archives and Records Administration have stated that, based on guidance from the Department of Justice, they will not respond to questions about whether the study constitutes a federal record under the Federal Records Act because the FOIA case is pending.”

The Presidential and Federal Records Act Amendments of 2014 explicitly grants the Archivist the power to declare documents  as federal records (even if they cannot currently be released to the public), and the AOTUS should have used it. While the record was preserved as a presidential record, which is arguably another reason Ferriero declined to enter the fray over the fate of the report, the Trump administration experience has shown that we cannot blindly trust the Chief Executive to do the right thing.

This is the Archive's 21st FOIA Audit. Modeled after the California Sunshine Survey and subsequent state "FOI Audits," the Archive's FOIA Audits use open-government laws to test whether or not agencies are obeying those same laws. Recommendations and findings from previous Archive FOIA Audits have: directly led to FOIA fixes in both the 2016 FOIA Improvement Act (25-year B5 sunset) and the Open Government Act of 2007 (requiring agencies to report their ten oldest pending requests); exposed OMB’s lack of action on FOIA fee regulations, ultimately prompting an Administrative Procedures Act lawsuit filed by Cause of Action that forced the agency to craft new (albeit lackluster) regulations; forced agencies to craft explicit customer service guidelines; mandated FOIA backlog reduction; institutionalized the use of individualized FOIA tracking numbers; led to reporting requirements on the average number of days needed to process requests; and revealed the (often embarrassing) ages of the oldest pending FOIA requests - like FOIA requests so old they could rent a car. The surveys include:

[1] These figures are based on the actual outlays from FY2020, which are the most recent actual budget outlays available.

[2] One terabyte equals one thousand gigabytes. It is estimated that 10-15 terabytes could hold the entire contents of the Library of Congress.

Letter to H-Diplo: An Opportunity to Reform and Improve the Practices of the Archives of the United States
Burr, Gardner, Immerman, Kimball