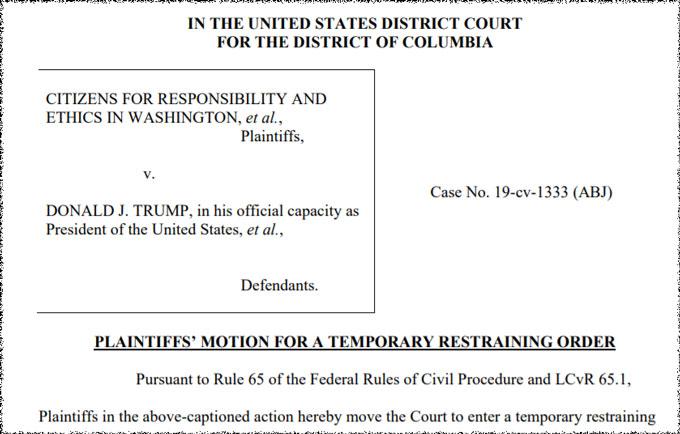 Washington D.C., October 1, 2019 – The National Security Archive together with Citizens for Responsibility and Ethics in Washington (CREW) and the Society for Historians of American Foreign Relations (SHAFR) today filed a motion in federal court for a temporary restraining order to compel the White House to preserve records of foreign leader phone calls and meetings with the president, and records of White House record-keeping practices and policies.

The motion cites the new revelations from the whistleblower complaint filed with the Intelligence Community’s Inspector General that the White House had restricted access to presidential transcripts of calls and meetings such as the controversial July 25, 2019 call with Ukrainian President Zelenskyy, and that such records were placed into a “codeword-level system solely for the purpose of protecting politically sensitive – rather than national security sensitive – information.”

The plaintiffs had originally filed suit in May 2019, with pro bono representation from the firm of Baker McKenzie, after repeated media accounts of White House failure to keep records of highest-level meetings, including at least five discussions between President Trump and Russian President Vladimir Putin and another with North Korean leader Kim Jong Un. The case is pending before Federal District Court Judge Amy Berman Jackson, Case No. 19-cv-1333 (ABJ).

After the latest revelations of problematic White House record keeping, CREW’s chief FOIA counsel, Anne Weismann, repeatedly wrote the Department of Justice asking for assurances that all relevant information would be preserved pending the resolution of this lawsuit, but Justice declined to do so, saying any such assurances “clearly implicate privileged legal advice.”

Today’s motion cites “the palpable risk that presidential records will be lost to Plaintiffs and the American people,” and argues that “to hold the President immune from any lawsuit seeking to make him accountable for his recordkeeping violations would, however, fly in the face of the text and the purpose of the PRA [Presidential Records Act], its historical context, and the congressional record.”

Archive Director Tom Blanton said, “By all accounts, White House record keeping is a mess, but federal courts have ducked the issue to date, citing separation of powers and some limiting precedent from the Reagan and Bush era White House e-mail cases that we brought. Yet even that precedent empowers the courts to look into White House policies and practices. And all precedent requires the White House to preserve its relevant information while a lawsuit is pending.”

US Gives Court No Assurances on Records Preservation
October 1, 2019