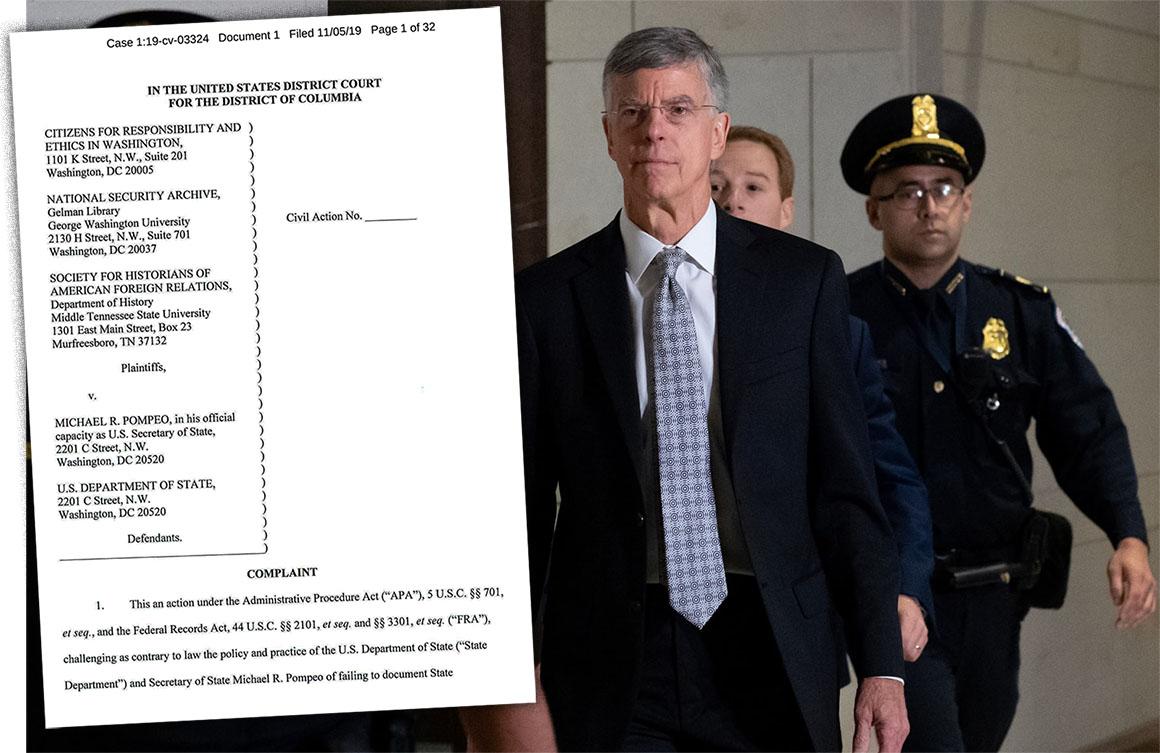 by Lauren Harper and Tom Blanton 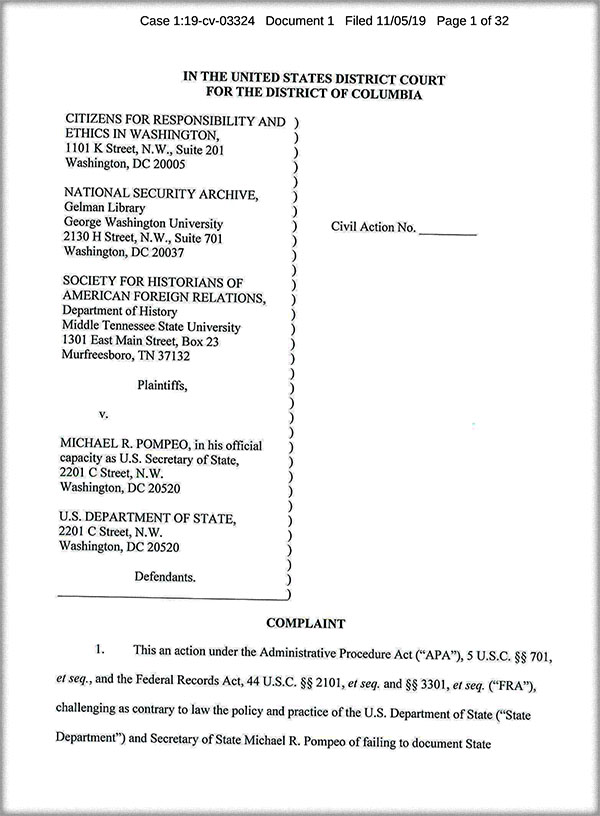 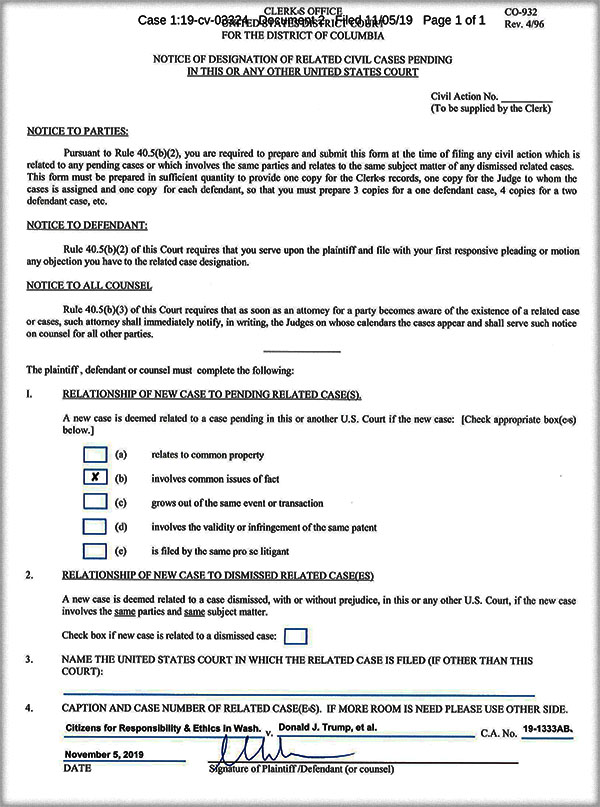 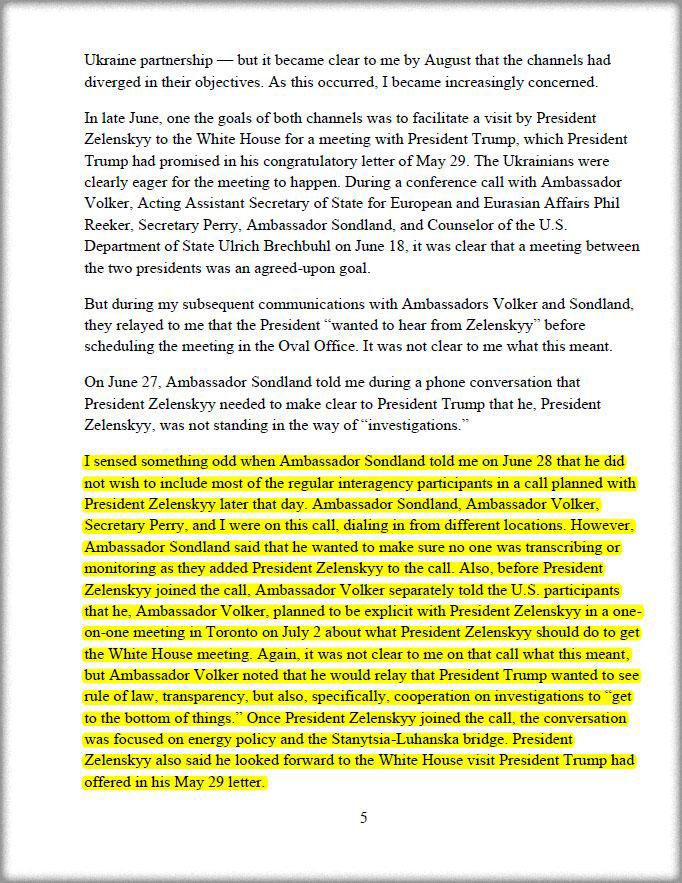 Washington D.C., November 5, 2019 - The National Security Archive, together with Citizens for Responsibility and Ethics in Washington (CREW) and the Society for Historians of American Foreign Relations (SHAFR), sued Secretary of State Mike Pompeo and the Department of State today for violating the Federal Records Act by failing to create and preserve essential State Department records (see the complaint). The legal team representing the plaintiffs in the case is led by Anne Weismann and Conor Shaw of CREW, and pro bono counsel George Clarke and Mireille Oldak of Baker McKenzie.

Evidence from the House’s impeachment inquiry, including from Ambassador William Taylor, the chargé d'affaires for Ukraine under the Trump administration, and from former Ambassador to Ukraine Marie Yovanovitch, all speak to a pattern and practice of bypassing official record-keeping procedures at the State Department. In discussing a June 28 State-organized phone call with Ukrainian President Zelenskyy, Ambassador Taylor testified that, not only did the Ambassador to the European Union Gordon Sondland exclude most of the regular interagency participants from the call, but that “Ambassador Sondland said that he wanted to make sure no one was transcribing or monitoring as they added President Zelenskyy to the call.” This is a direct violation of the State Department’s obligation under the Federal Records Act to document agency policies, decisions, and essential transactions.

The FRA lawsuit comes on the heels of a related Presidential Records Act case that the Archive, CREW, and SHAFR filed in May 2019 to compel the White House to create and preserve records of the President's meetings with foreign leaders. The PRA suit was filed after news reports indicated that no such records existed for at least five meetings with Russian President Vladimir Putin, one meeting with North Korean leader Kim Jong Un, and a meeting with Saudi Arabian Prince Mohammad Bin Salman.

On October 1, after reports that a July 25 telephone call with President Zelenskyy was receiving unorthodox treatment, the plaintiffs filed a motion in federal court asking for a temporary restraining order to compel the White House to preserve records of foreign leader phone calls and meetings with the president. The Justice Department opposed the motion and in the first round of conversation with the judge, refused to provide any assurances that such records were being saved. It took 24 hours for the Justice Department to provide the court a notice of voluntary preservation. As a result, on October 4, U.S. District Judge Amy Berman Jackson ordered the White House to preserve all records relating to meetings and phone calls with foreign leaders, as well as all records on White House practices and policies for creating and keeping such records, and in doing so, memorialized in a formal court order the six categories of information the Plaintiffs sought to preserve.

“Sworn testimony by Ambassador Bill Taylor, a Vietnam vet, West Point grad, career diplomat, and top U.S. representative in Ukraine, let Congress know his State Department colleagues ordered no records kept of a key U.S.-Ukraine conversation, right in the middle of a secret hold on U.S. aid to Ukraine,” remarked Tom Blanton, director of the National Security Archive.  “This was wrong.  The records laws place an obligation on the State Department to document its policies and decisions, and the same goes for the White House.”

"Secretary Pompeo should not be engaging in document-dodging. The Secretary has a legal obligation to keep records of the 'essential transactions' of the State Department," said Lauren Harper, the National Security Archive's director of public policy. "Conversations with foreign heads-of-state have to rank at the top of that list, so our lawsuit seeks to hold the Secretary to the letter of the law."