The Washington/Camp David Summit 30 Years Ago

Compiled and edited by Thomas Blanton and Svetlana Savranskaya 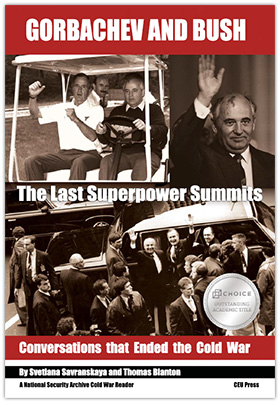 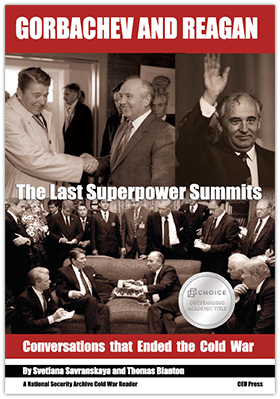 Gorbachev’s Nuclear Initiative of January 1986 and the Road to Reykjavik
October 12, 2016

Washington, D.C., June 2, 2020 – The Washington/Camp David summit 30 years ago today brought Presidents George H.W. Bush and Mikhail Gorbachev together for three days of intense discussions of the future of Europe, the unification of Germany that would happen later that year 1990, the economic crisis facing the Soviet Union, and the tense stand-off between Moscow and the independence-minded Baltic republics, according to declassified Soviet and American documents published today by the National Security Archive.

The newly published evidence adds fascinating detail to the most thoroughly documented account of the meeting, Chapter 7 (pages 571-703) in The Last Superpower Summits (CEU Press, 2016), which is forthcoming in a new two-volume paperback edition in 2020.[1]  Today’s e-book combines the new material with a core collection on the Washington/Camp David summit published by the Archive on the 20th anniversary in 2010.[2]

Highlights of the new evidence include:

* President Bush’s own handwriting and underlining for emphasis on the highly classified transcript of Secretary of State James Baker’s Moscow conversation with Gorbachev on May 18 prior to the summit.

* Baker’s NODIS EYES ONLY cables from Moscow summarizing his talks with Soviet Foreign Minister Eduard Shevardnadze on May 17 and with Gorbachev on May 18.

* Background “theme papers” classified SECRET/EXDIS from the State Department’s briefing book for President Bush before the summit, covering the Soviet economy and the Baltics.

* Transcript of the telephone call from Bush to West German Chancellor Helmut Kohl on the second day of the summit summarizing the “play by play” with Gorbachev over the contentious issue of a unified Germany’s membership in NATO, and undercutting subsequent assertions that this was the moment when Gorbachev had effectively acquiesced.

* The astute CIA analysis only days after the summit that Moscow had no concrete plan for a new European security structure to replace the Cold War alliances, and that German unification in NATO would likely pre-empt any such replacement.

When Secretary of State Baker came in Moscow in May 1990 to prepare for the upcoming summit, he found Gorbachev under severe pressure – “less a man in control than an embattled leader” in the words of U.S. ambassador Jack Matlock (see Document 1).[3]   The Baker discussions with Soviet Foreign Minister Eduard Shevardnadze and then with Gorbachev previewed most of the substance that President Bush would talk about with Gorbachev at the Washington/Camp David summit two weeks later.  These notably included the economic crisis in the Soviet Union and Gorbachev’s request for aid:  “We need some oxygen.  We are not asking for a gift.  We are asking for a loan.”  (See Document 7)

Baker also cautioned the Soviets against their pressure tactics against the Baltic republics, already in the midst of their struggles for independence from the Soviet Union, and warned that this issue could very negatively affect relations with the U.S., in fact, that it would hold up any trade agreement along the lines discussed at Malta the previous year.  Last but not least, the issue of German unification and its potential membership in NATO drew extended discussion, with Baker offering nine assurances about changing the character of NATO from a military to a political alliance not threatening to Moscow.  As Baker reported to President Bush about Gorbachev’s views, “Germany definitely overloads his circuits right now.” (See Document 8)

The documents show that Gorbachev came to the Washington summit at the end of May 1990 under severe constraints from his own Central Committee (in marked contrast to previous summits). His marching orders (Document 4) reflect the dismay within leading Soviet circles over the loss of the Eastern European empire, resistance to Gorbachev’s demilitarization policy, and opposition to the unification of Germany.

Retrenchment on the Soviet side found an echo on the U.S. side, as a combination of the U.S. Air Force desire for thousands of air-launched cruise missiles (conventional warheads only, but the Soviets saw the possibility of nuclear conversion in a crunch) and U.S. Navy resistance to on-site inspections for mutual verification on ship-board nuclear warheads prevented real progress on major arms cuts proposals such as the 50% ballistic missile cut discussed by Gorbachev and President Reagan at Reykjavik four years earlier.[4]  In fact, completing the START treaty – which Gorbachev originally sought to sign at the Washington summit – would take an entire additional year.

The documents show that Gorbachev came to Washington determined to push for his idea of a European security structure, or the “common European home.”  He envisioned a gradual transformation of NATO and the Warsaw Pact into political organizations and their subsequent dissolution as the Conference on Security and Cooperation in Europe (CSCE) would become institutionalized and subsume NATO security functions.  For Gorbachev, this was the answer to the Soviet Union’s pressing issues—modernization and integration into Europe.[5]  At the same time, the Soviet leader was not going to alienate Germany as a potential friend and donor by opposing German unification—even in NATO if other alternatives could not be found.[6]

This situation created a strange dichotomy, where Gorbachev showed surprising flexibility on the issue of German unification—agreeing with the Helsinki principle of self-determination on alliances – but at the same time wanted to slow down the pace of unification to let European integration come first.  At the Washington summit, Gorbachev said that he would prefer to see “united Germany as the mediator of the European process” and that his preferred model of unification would be “a model that would include some length of time and be synchronized with the European processes.”

The documents show Gorbachev as painfully aware of the reverse connection between German unification and the European process—fast unification would negate his vision of the common European home.  Although Baker in his Moscow meetings before the summit stated that the United States now accepted the idea of building European security structures, and the Americans would go on to lead a NATO summit in July focused on altering alliance policy in ways that would help Gorbachev, at the Washington/Camp David summit President Bush emphasized that “unification is unfolding faster than any of us could have imagined,” and that “united Germany is right around the corner.”

In his conversations with Bush, perhaps for the first time in the history of U.S.-Soviet summits, the Soviet leader talked about his parliament (the Supreme Soviet) almost as much as his American counterpart discussed the Congress—and in a similar fashion as well.  Gorbachev sincerely admitted that political pressures from the Supreme Soviet imposed severe limits on his freedom of maneuver on most of the issues of the negotiations, but he also partly used this issue as leverage with the U.S. president.

However, especially on the issue of the Lithuanian drive for independence, Gorbachev was truly under fire from the left and from the right in the Supreme Soviet. He also badly needed to show the summit as his success, which domestically would hinge on signing the trade agreement, securing Western credits, and a fast signing of START.  The documents show that Gorbachev repeatedly discussed the looming economic crisis in the Soviet Union and the need for support of the Soviet reform by the West.

The two leaders’ very first one-on-one discussion on May 31 (see Document 15) spent significant time on economic reform in the Soviet Union, and Gorbachev’s requests for assistance. During that discussion, the Soviet leader asked his American counterpart what kind of Soviet Union the U.S. would want to see in the future. He in turn emphasized that the new Soviet Union would be a democratic, open and stable state with market economy, but that change would have to come gradually.

Gorbachev found Bush sympathetic regarding Soviet domestic problems but unable and unwilling to deliver what the Soviet leader wanted most—credits to support investment and purchase consumer goods.  The most that Bush could do, after a personal plea from Gorbachev in the hallway after a state dinner, was to go ahead with the trade agreement, despite political criticism over the Lithuania issue, to make sure Gorbachev had at least one success to point to.  After the trade agreement was signed, the Camp David discussions on June 2, 1990, featured a true tour d’horizon of regional issues and showed genuine cooperation between the Soviet and American leaders.[7] 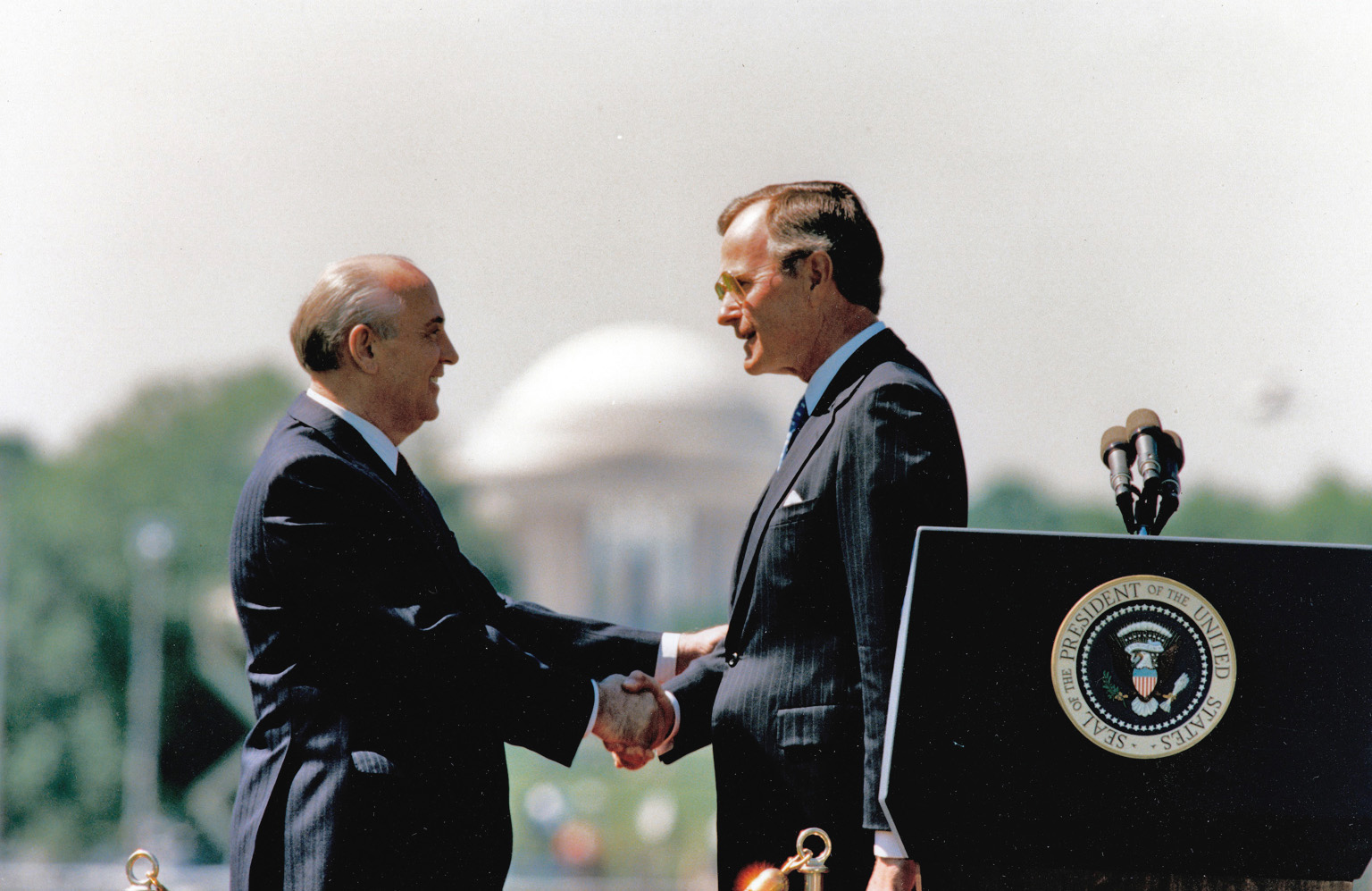 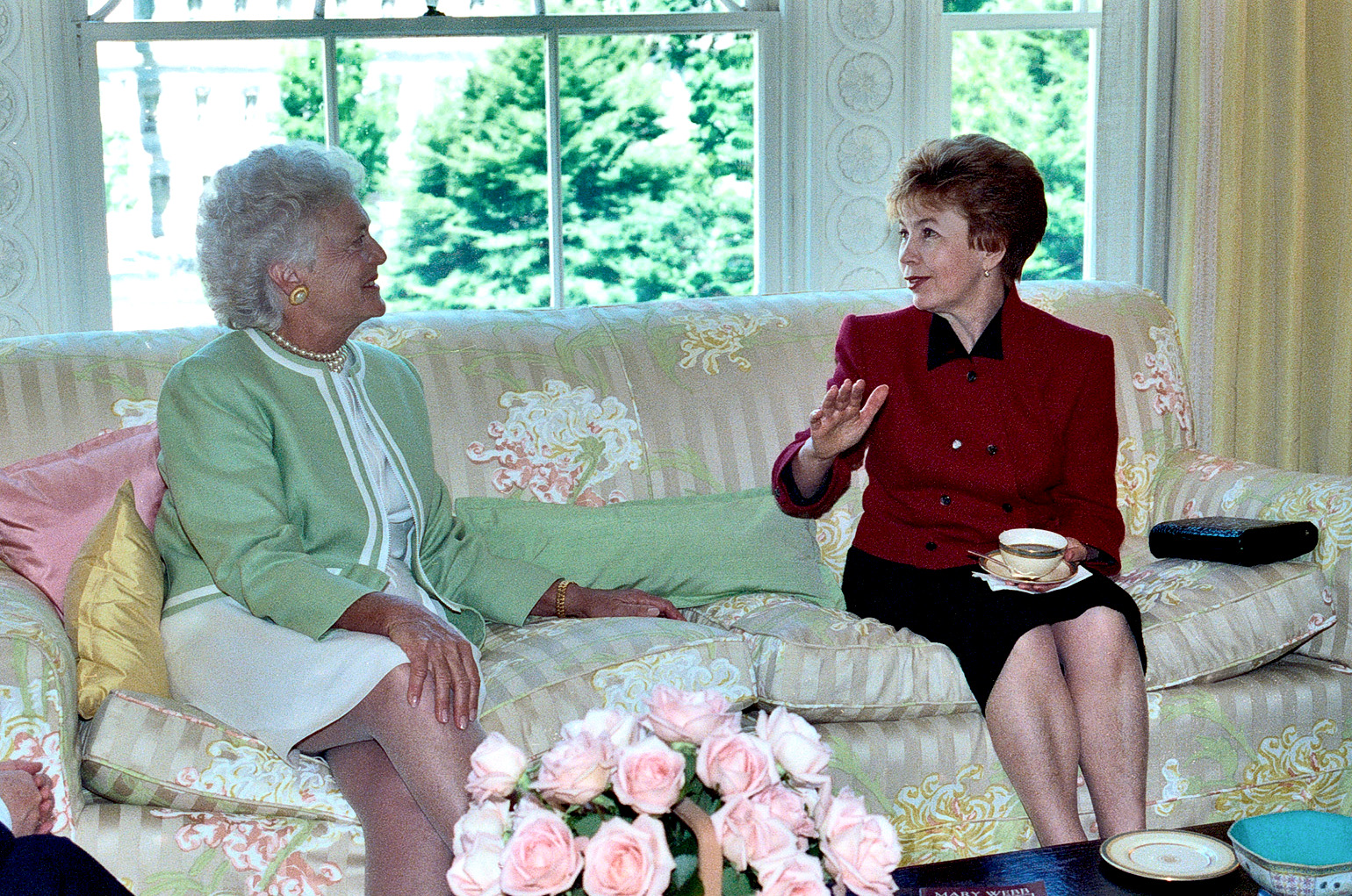 Inside the White House, in the private residence, First Lady Barbara Bush hosted а coffee for Raisa Gorbacheva on the first day of the summit, May 31, 1990. (Credit: George H.W. Bush Presidential Library, Р 13290-17) 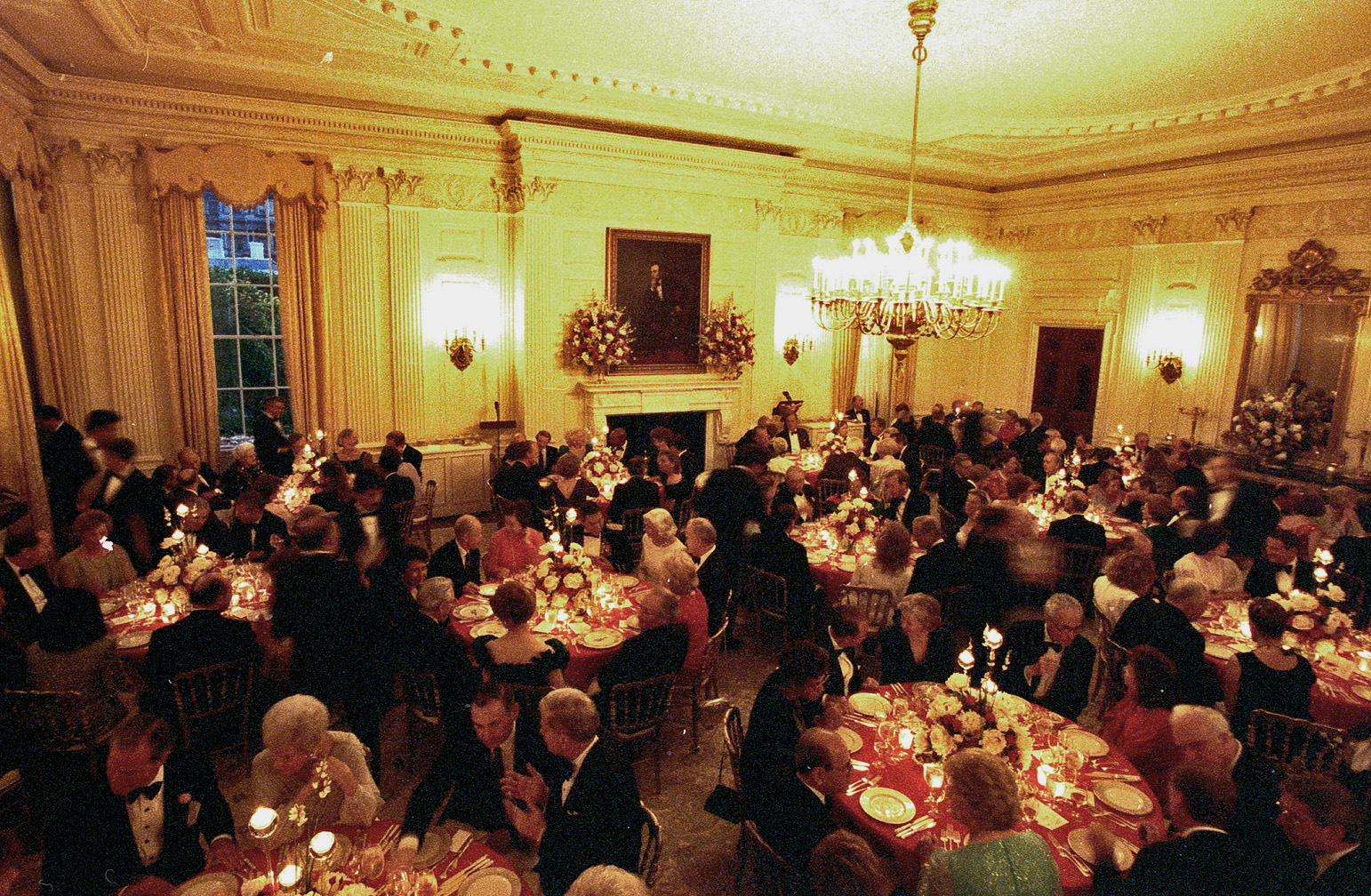 The chandeliers in the East Room of the White House cast golden tones over the state dinner honoring the Gorbachevs on May 31, 1990. President Bush sat just to the right of the fireplace, talking through an interpreter to Raisa Gorbacheva, while the table to the left of the fireplace included Gorbachev with Barbara Bush and actor Morgan Freeman. (Credit: George H.W. Bush Presidential Library, Р 13341-21) 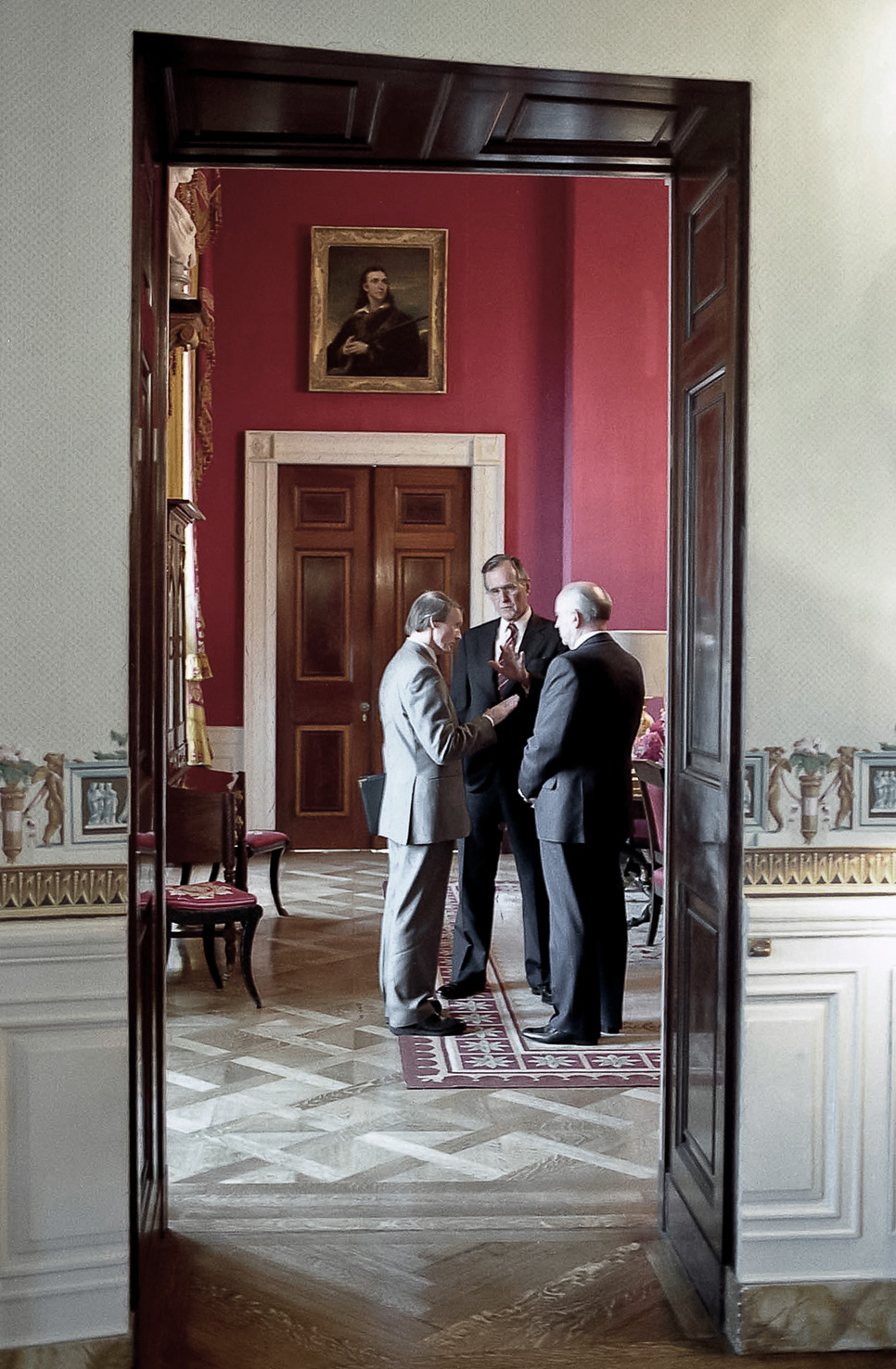 Gorbachev pulled Bush aside during the summit - here in the Red Room at the White House on June 1, 1990 - to make а personal plea for the trade deal the Americans had stalled over the issue of Soviet pressure on the Baltic states against their declared independence. Bush ultimately agreed to sign the deal, with some caveats. (Credit: George H.W. Bush Presidential 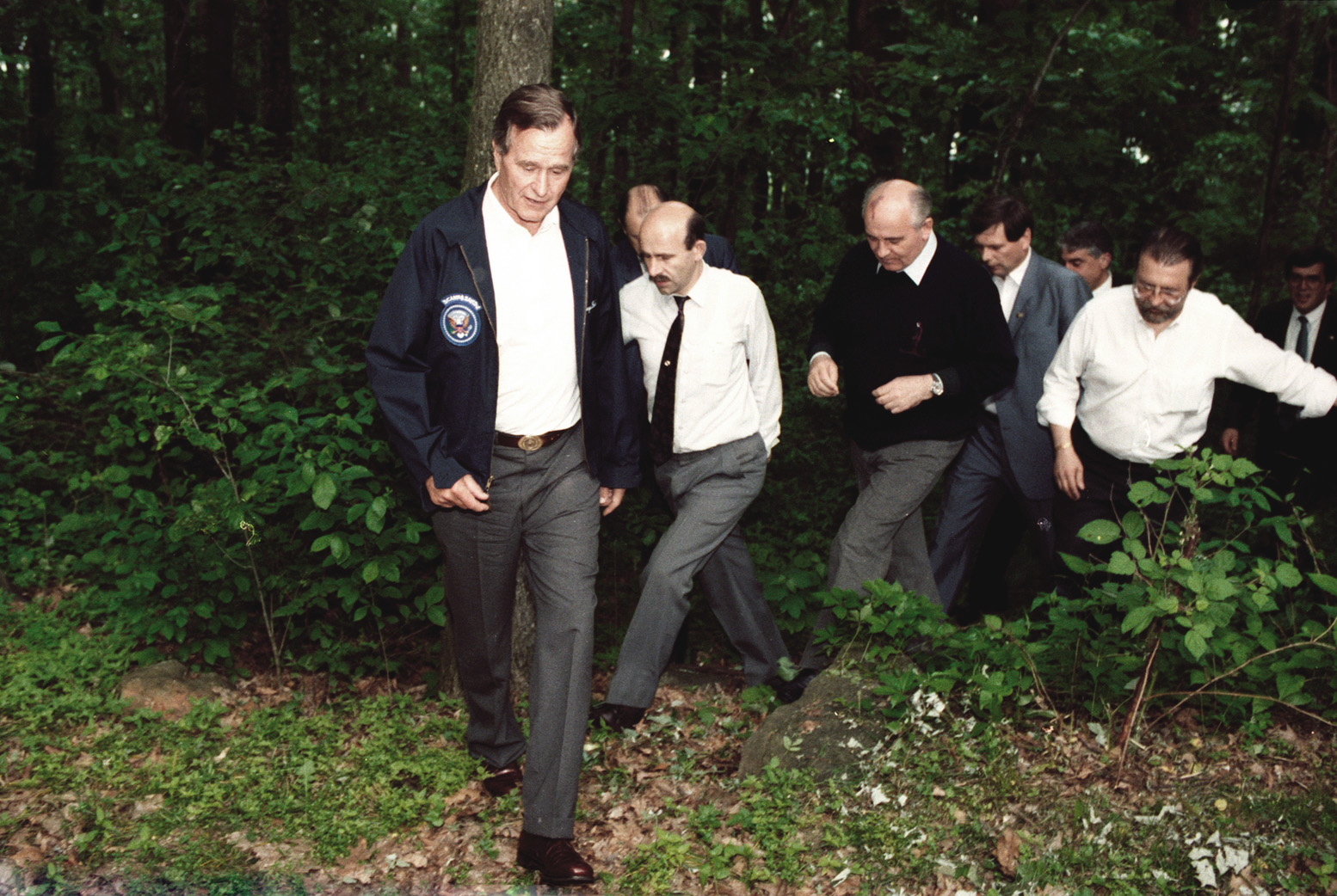 Gorbachev had never been to Camp David, the American president's official dacha, so Bush made а point of moving the summit there via helicopter and then scrambling through the woods with interpreter Palazhchenko, Gorbachev and а coterie of security agents, June 2, 1990. (Credit: George Н. w. Bush Presidential Library, Р 13410-16) 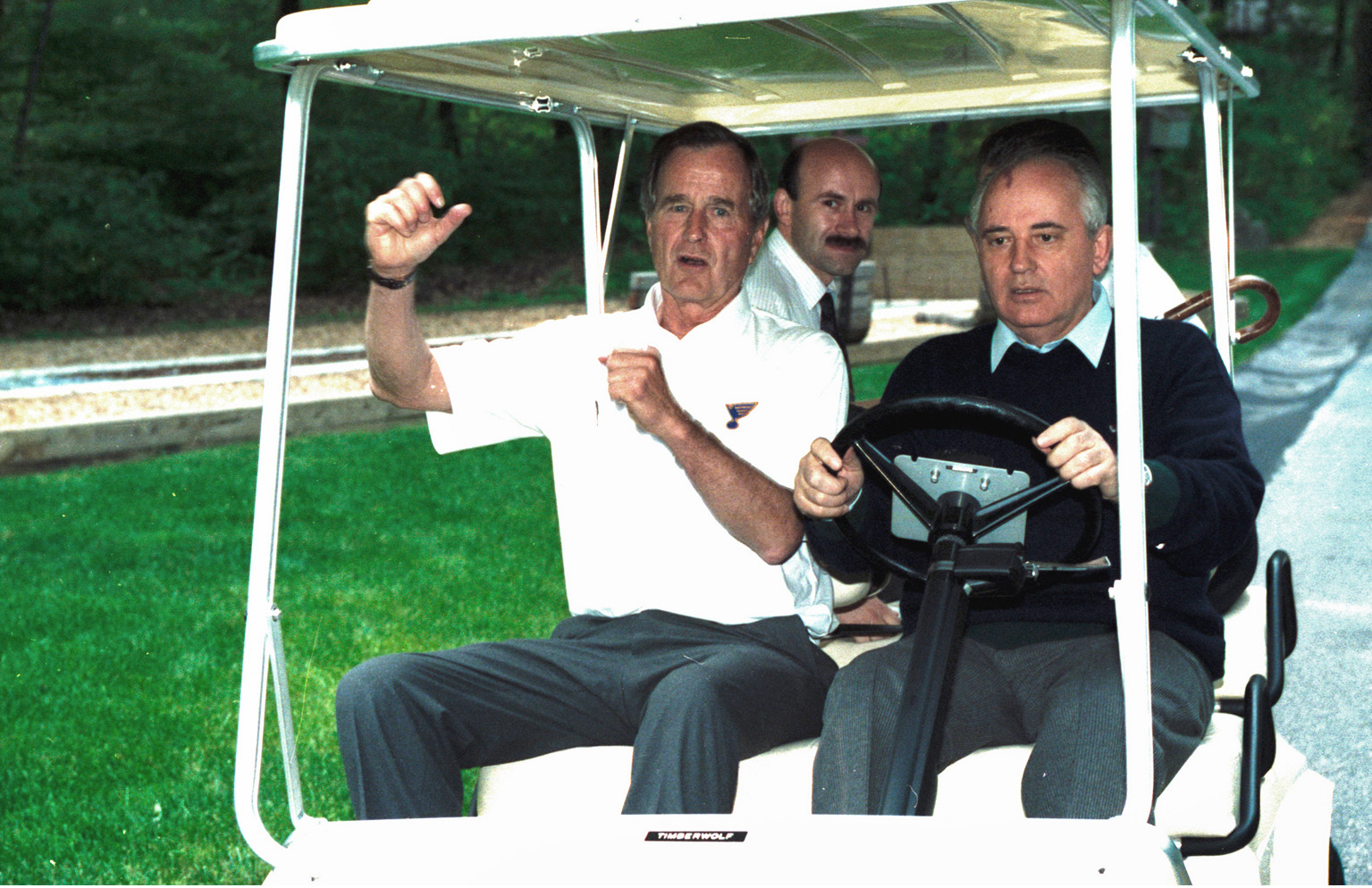 The American president also gave golf cart driving lessons to Gorbachev, here with Pavel Palazhchenko in the back seat and some anxiety on the faces, June 2, 1990. (Credit: George Н.W. Bush Presidential Library, Р 13410-26) 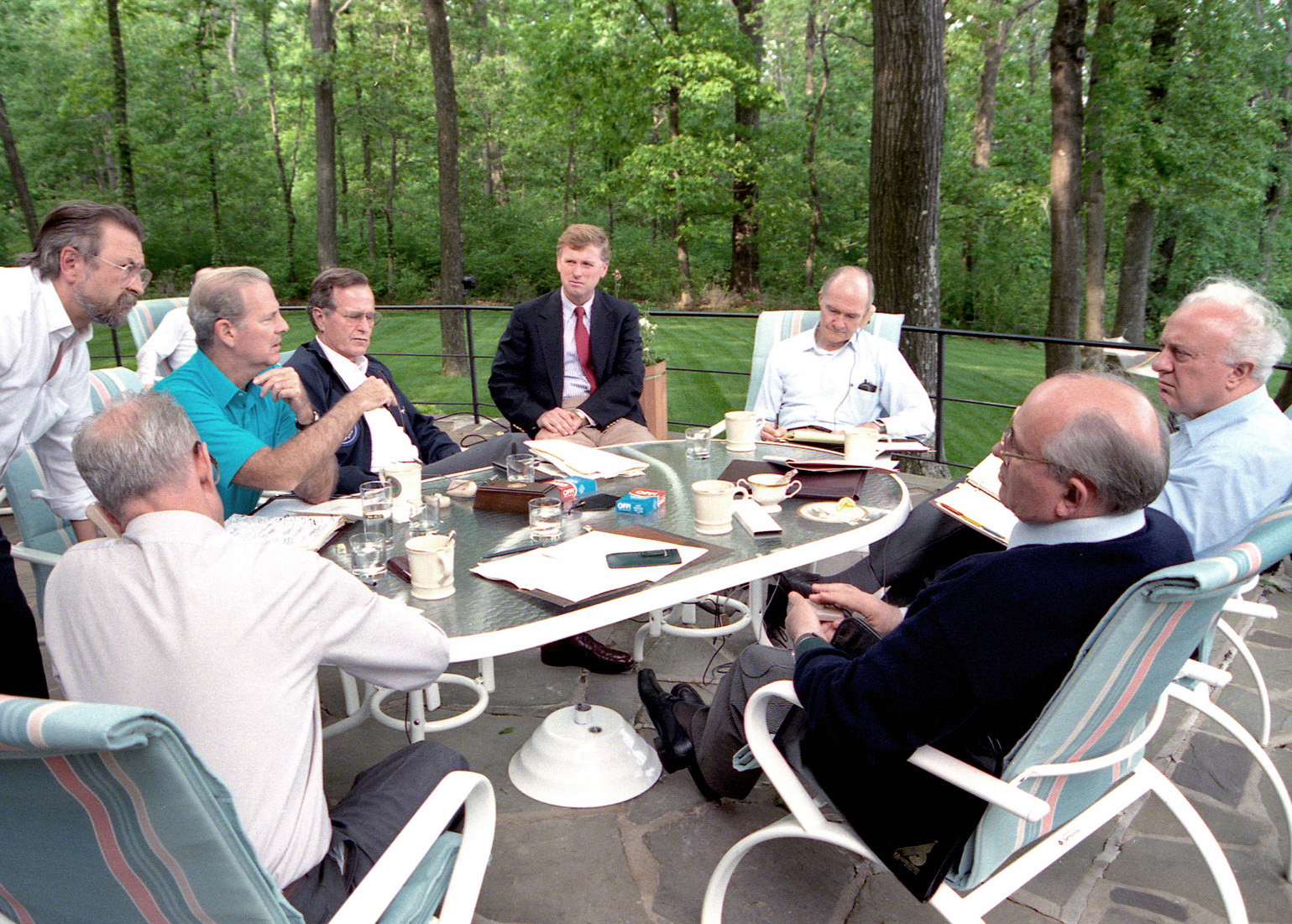 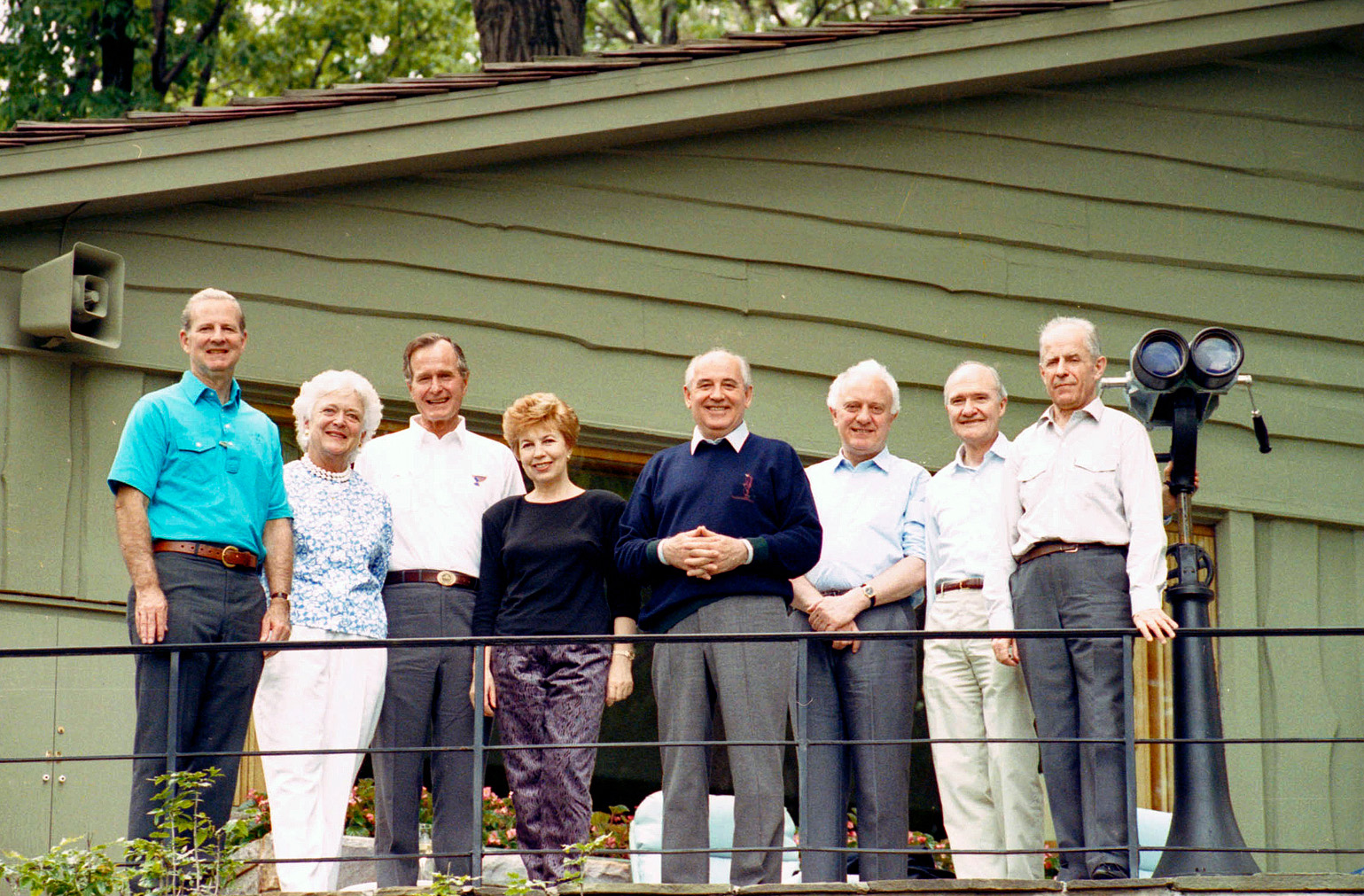 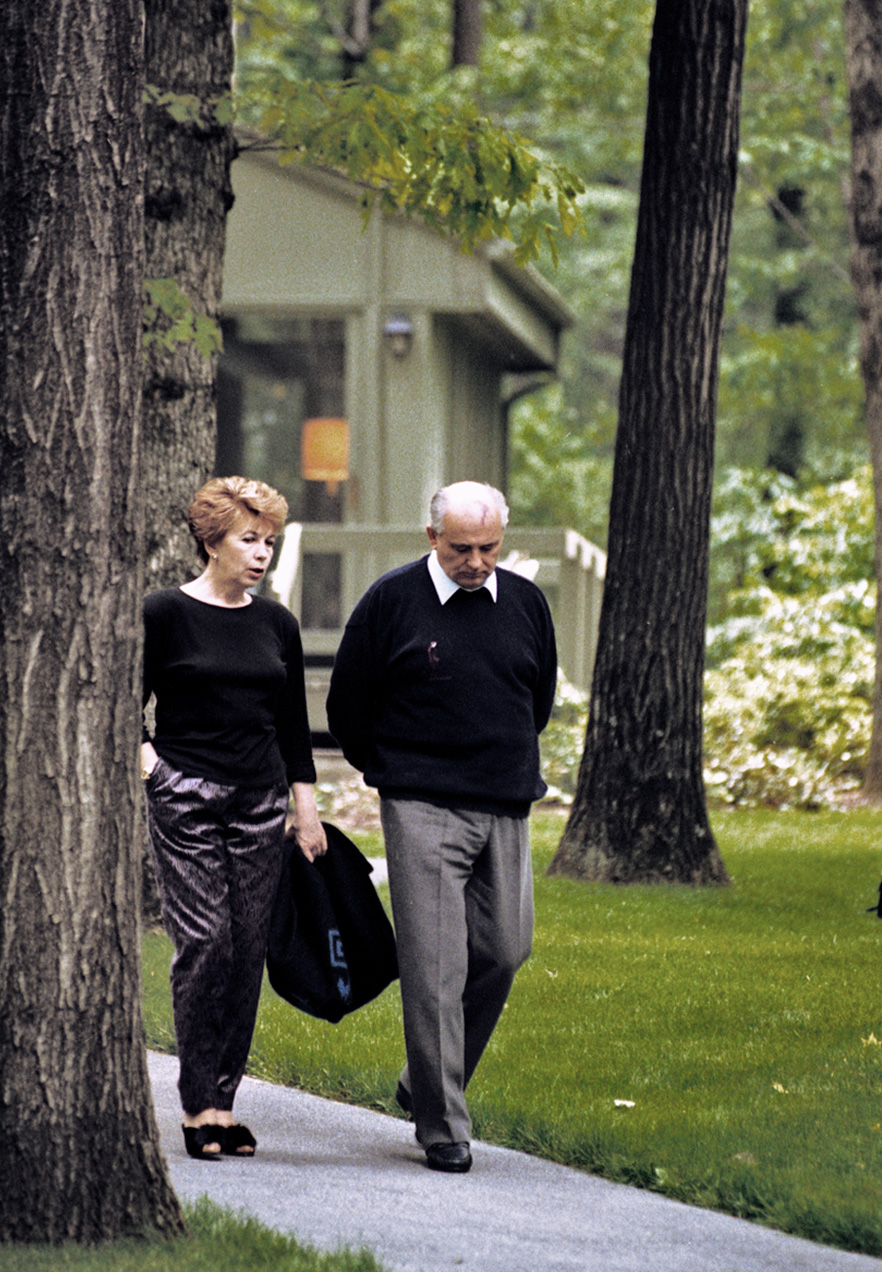 The Gorbachevs were known for always taking long walks together at the end of the day, discussing everything that had come up, and Camp David's sidewalks and trees framed this characteristic scene, June 2, 1990. (Credit: George H.W. Bush Presidential Library, Р 1 3435-04) 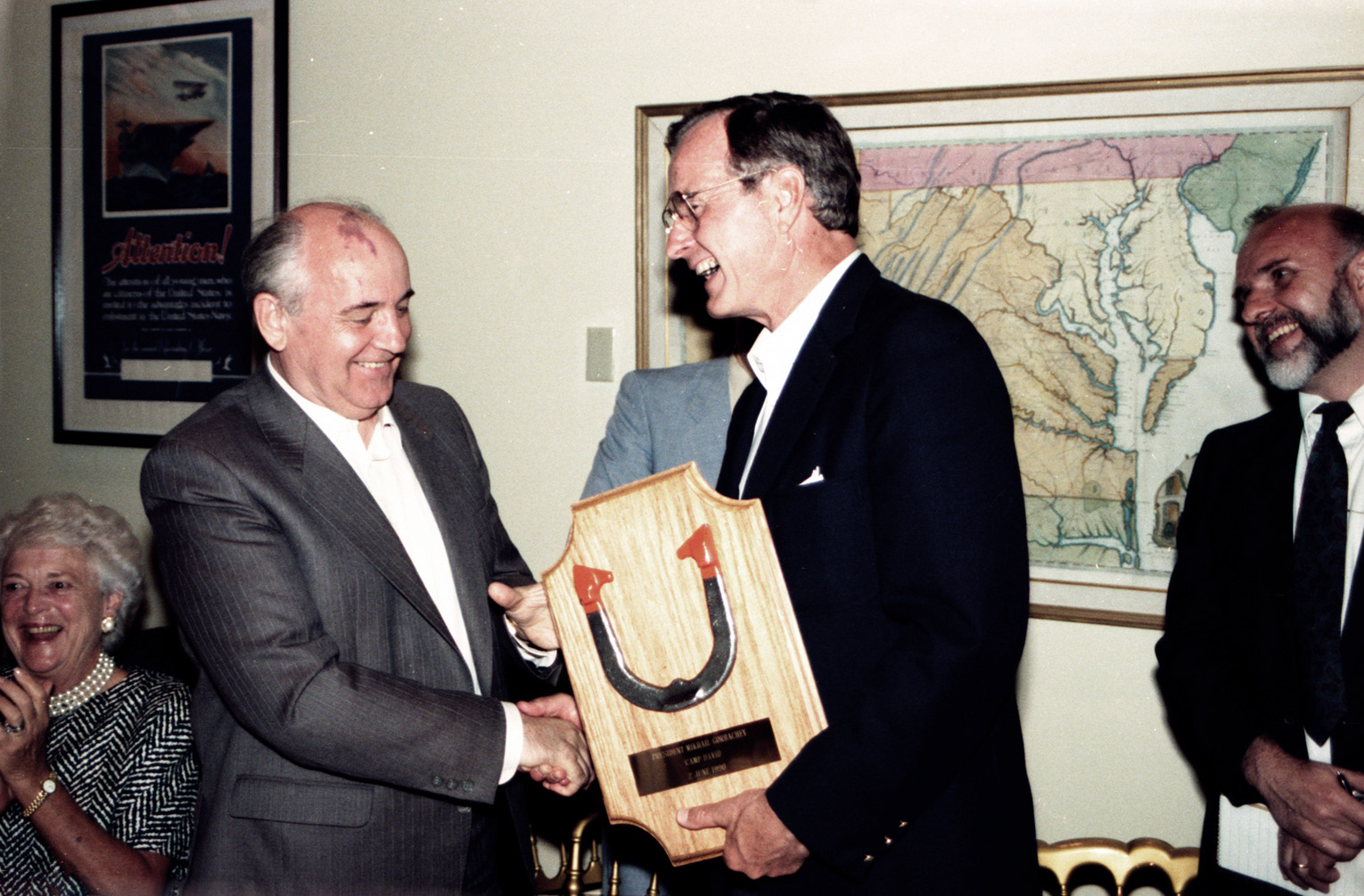 [3] Appointed by President Reagan as U.S. ambassador to Moscow, Matlock was one of the few Reagan holdovers to survive the hostile takeover by the new Bush administration in January 1989. Matlock gives a vivid and detailed account of the multiple crises facing Gorbachev in the spring of 1990 in Jack E. Matlock Jr., Autopsy on an Empire: The American Ambassador’s Account of the Collapse of the Soviet Union (New York: Random House, 1995), especially pp. 295-380.

[4] For a detailed evisceration of the U.S. negotiating positions – “little heed was given to the broader consequences of imposing one-sided compromises on Gorbachev and Shevardnadze” – see Raymond L. Garthoff, The Great Transition: American-Soviet Relations and the End of the Cold War (Washington D.C.: Brookings, 1994), pp. 423-424. The Tacit Rainbow cruise missile program, priority item number one in the Bush National Security Directive (Document 3), would be canceled in 1991 for cost overruns and lack of efficacy.

[6] Gorbachev’s aide Andrei Grachev astutely observed that all the bargaining over Germany and NATO was “more a question of form than serious content; Gorbachev was trying to gain needed time in order to let public opinion at home adjust to the new reality” while “hoping to get at least partial political compensation from his Western partners….” See Andrei Grachev, Gorbachev’s Gamble (London: Polity, 2008), pp. 157-158.

[7] For the extended discussion beyond the excerpts posted here, see pp. 683-694 in Savranskaya and Blanton, The Last Superpower Summits.