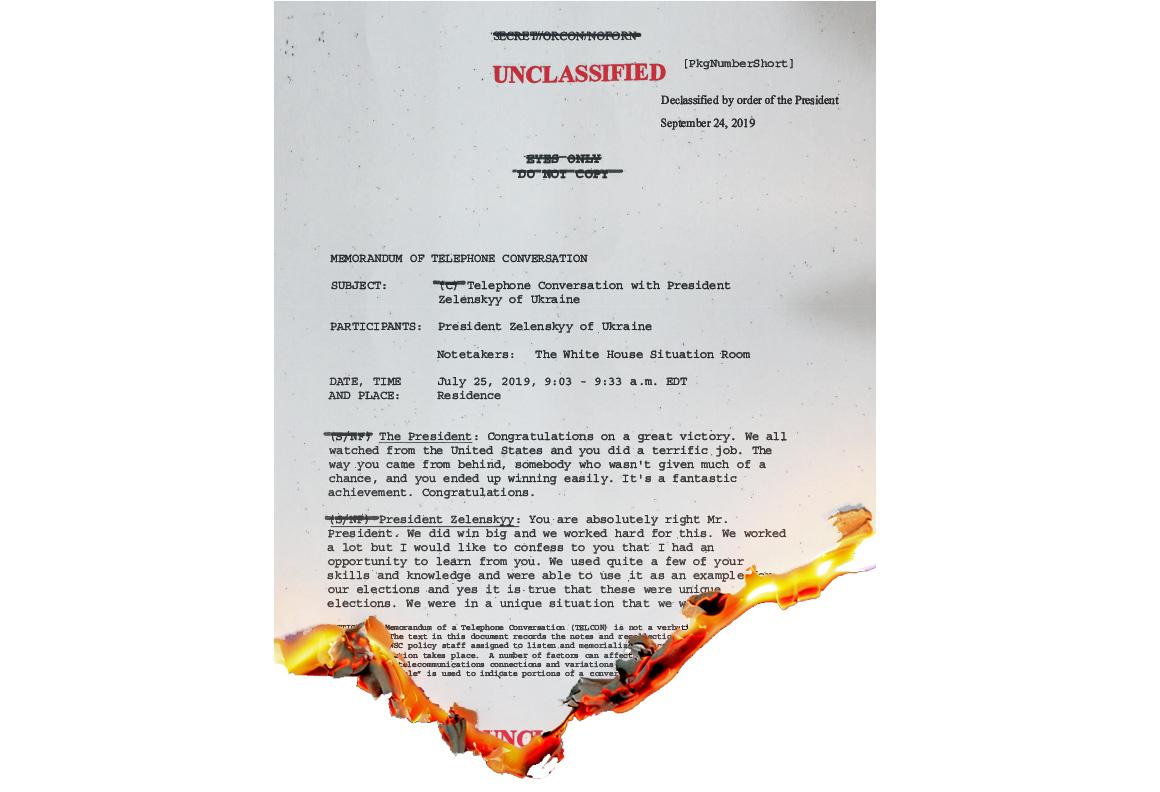 The above Tweet is embedded on our page, and the number of likes and shares changes as they change on Twitter.  Below is a screenshot of that Tweet, which does not capture the digital links, the ongoing likes and shares, or the attachments. 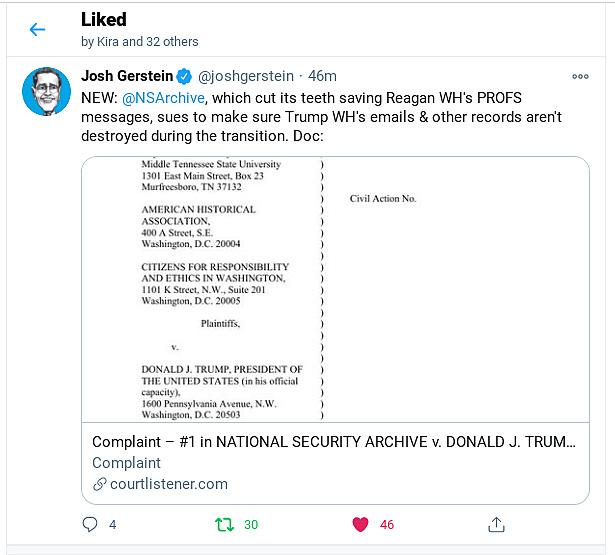 Washington, D.C., Dec. 1, 2020 – The National Security Archive, the Society for Historians of American Foreign Relations, the American Historical Association, and the Citizens for Responsibility and Ethics in Washington today filed suit against President Donald Trump in his official capacity, seeking to enforce the Presidential Records Act and prevent any destruction of records during the presidential transition.

The lawsuit cites the inadequacy of current White House policies that only require a screenshot of instant messages to be saved, preserving only the graphic content, when the law (as amended in 2014) requires "a complete copy" to be preserved, including digital links and attachments.

The Archive wrote the White House Counsel, Pat Cipollone, on November 13, seeking express assurances that all presidential records would be preserved, and citing six different news reports that White House staff were violating the records laws.  More than two weeks later, the White House has not responded.

“Presidential records are always at risk because the law that’s supposed to protect them is so weak and depends on good faith, which is currently lacking,” said Tom Blanton, director of the National Security Archive.  “The Archive, historians, and CREW are suing to put some backbone in the law, save complete copies of all those instant messages, and prevent any bonfire of records in the Rose Garden.”

From the Society for Historians of American Foreign Relations:

“For the purpose of creating a ‘usable past’ for generations of future citizens, the Society for Historians of American Foreign Relations is gravely concerned with preserving the integrity of the Trump administration’s records. In light of the administration’s previous violations of the Presidential Records Act, SHAFR consequently judges it essential to take legal action to prevent any efforts to destroy records or otherwise fail to retain them in their entirety. It welcomes the opportunity to join with like-minded organizations in pursuing this goal,” said SHAFR's Historical Documentation Committee Chairman Richard Immerman.

From the American Historical Association:

“The American Historical Association's Congressional charter tasks us with the responsibility to promote historical studies and monitor the collection and preservation of historical materials. This includes advocating for the integrity of presidential records, which reveal the functioning of every aspect of the executive branch—from policy consideration to policy implementation. This research provides an unparalleled look inside an administration’s activities that would, if absent, leave the world,” said American Historical Association Executive Director James Grossman.

From Citizens for Responsibility and Ethics in Washington (CREW):

“The Presidential Records Act exists for a simple reason: to prevent a president and their staff from destroying historically valuable records. By deleting or preserving only parts of these records, the White House is destroying essential historical records,” said CREW Executive Director Noah Bookbinder. “The American people not only deserve to know how their government is making important decisions, but deserve to understand what was going on behind closed doors and what we could do better in the future.”

Representing the plaintiffs in the case are Anne Weismann, formerly Freedom of Information Counsel at CREW, and Nikhel Sus of CREW.

Compliance with the Presidential Records Act
2020-11-13