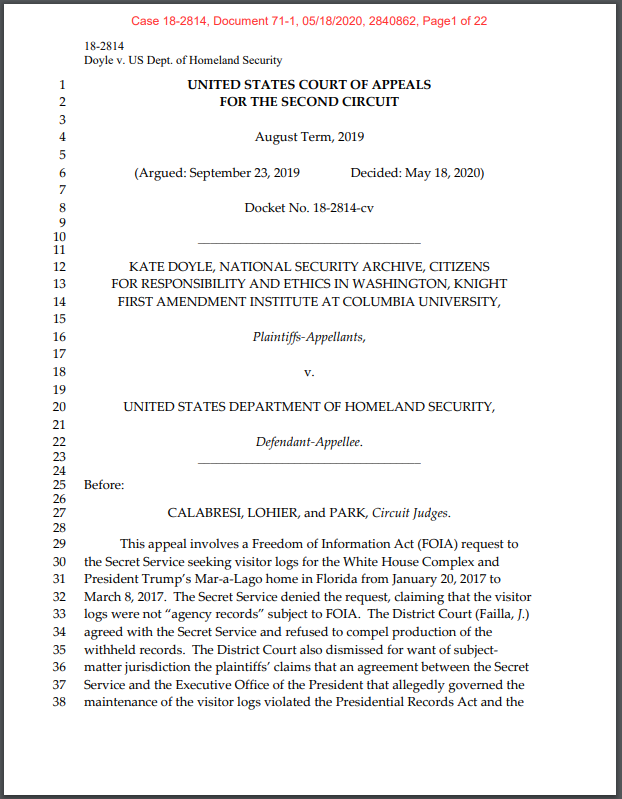 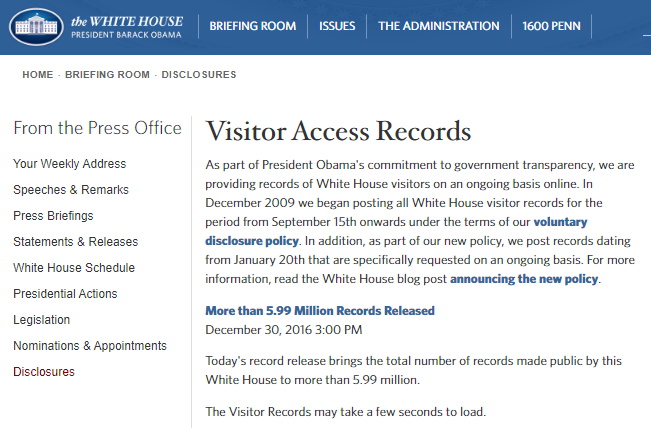 Washington, D.C., May 18, 2020 – The 2nd Circuit Court of Appeals today ruled against the National Security Archive’s lawsuit to restore the routine disclosure, under the Freedom of Information Act (FOIA), of the White House visitor logs that were taken down by the Trump administration in early 2017.

The 2nd Circuit’s 22-page ruling concentrates on the ostensible intrusion on a president’s ability to receive confidential advice, and the supposed burden of using FOIA’s regular exemptions to process the logs for release, while never acknowledging that the Obama White House routinely published its visitor logs some 90 days after the visit – some six million such records in all – with no apparent hindrance on presidential activity.

The ruling highlights severe weaknesses in the Federal Records Act – which apparently does not preclude a president from converting agency records into presidential ones not covered by FOIA through the simple expedient of a memo of understanding – and in the Presidential Records Act – which provides extremely limited forms of external review for White House record-keeping and the lack thereof.

Archive senior analyst Kate Doyle filed FOIA requests for White House visitor logs beginning with the Trump inauguration in January 2017, as part of her work tracking U.S.-Mexico relations from her office in New York.  The requests went to the Secret Service, which checks incoming visitors against various criminal databases, as part of its statutory duties within the Department of Homeland Security to protect the president.

Anticipating that the new administration’s antipathy for all Obama initiatives could lead to removal of the visitor logs, Doyle and the Archive filed new FOIA requests in March 2017 and went to federal court in April 2017, together with the Knight First Amendment Institute at Columbia University, and Citizens for Responsibility and Ethics in Washington (CREW).  The experienced CREW and Knight attorneys – Anne Weismann, Alex Abdo, Jameel Jaffer, and Conor Shaw – represented the plaintiffs through the federal district court and appeals court arguments.

CREW and Weismann led the original case against Presidents George W. Bush and Barack Obama to open the White House visitor logs, and negotiated the settlement in the first year of the Obama administration that produced the routine publication of some six million of the visitor logs between 2010 and January 2017, with limited redactions under the regular FOIA exemptions that protect, for example, national security or personal privacy.

A subsequent lawsuit against the Obama administration by the Judicial Watch group resulted in a judgment by the D.C. Circuit Court of Appeals that did not overturn the earlier settlement, but in convoluted language (written by Judge Merrick Garland) opened the door for a future president to cease publishing the visitor logs.

The Doyle v. DHS lawsuit by the Archive, the Knight Institute, and CREW argued that protecting the president and vetting White House visitors were so central to the Secret Service’s statutory mission that the records of that vetting were clearly agency records under Supreme Court precedent in the Tax Analysts case.  The government argued that the Garland opinion, plus a memorandum of understanding between the Secret Service and the Obama White House in 2015, established presidential control over the records at issue, and admitted that the Secret Service was keeping no systematic records of visitors at presidential properties such as Mar-a-Lago.

In July 2018, Judge Katherine Polk Failla in the Southern District of New York agreed with the government.  The plaintiffs filed their appeal on January 7, 2019, and oral arguments before Judges Guido Calabresi, Raymond J. Lohier, Jr., and Michael H. Park of the 2nd Circuit took place on September 24, 2019.

The presidential visitor records for Mar-a-Lago released in response to a FOIA lawsuit brought by the National Security Archive, together with the Knight First Amendment Institute at Columbia University and the Citizens for Responsibility and Ethics in Washington (CREW).

Complaint for injunctive and declaratory relief in Doyle et al. v. DHS, filed in the United States District Court for the Southern District of New York on April 10, 2017.

Kate Doyle’s February 24, 2017, FOIA appeal to the Secret Service concerning her January 23, 2017, FOIA request for the White House visitor logs covering Inauguration weekend, for which she received no response.

Justice Department’s September 3, 2009, letter to CREW’s Anne Weismann, Esq. summarizing the settlement of various FOIA and FRA lawsuits brought by CREW, noting that the following week the White House would announce a voluntary disclosure program, “pursuant to which visitors to the White House and the Vice President’s Residence will be publicly disclosed (subject to certain narrow exemptions).

Amicus brief of the Citizens for Responsibility and Ethics in Washington in Support of the Appellee, Judicial Watch v. United States Secret Service, May 8, 2012.

The American people have a right to know what special interests or foreign governments get in the door to lobby the president and his staff.

This was public information from 2010 to January 2017, when President Trump took down the visitor logs, and apparently ordered the Secret Service not to collect visitor data at sites like Mar-a-Lago.

President Obama published his visitor information within 90 days of the visit, and reporters could use the data to figure out, for example, which of the high tech companies had the most influence over Obama’s decisions. (Answer: Google)

The 2nd Circuit decision to keep the visitor logs out of the reach of the Freedom of Information Act centers around some alleged burden on the president from disclosing the visitor logs, and does not even mention the 6 million logs released by Obama.

The court case exposes real holes in the federal records laws, and tosses the baton to Congress, likely the next Congress not in an election year, to put some teeth in the statutes.