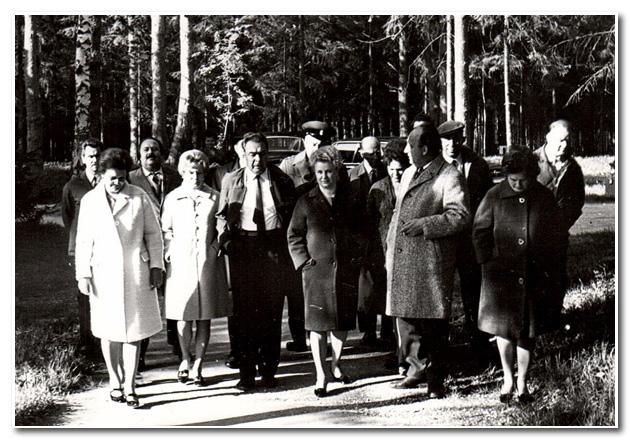 Inside the Central Committee, close-up views of Brezhnev and the Soviet system

"We have lost the biggest ideological battle of the XX century" 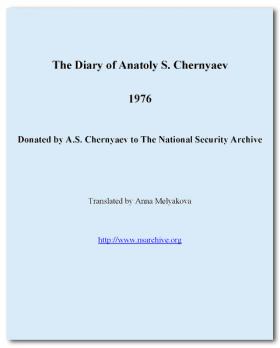 Washington, DC, May 25, 2016 – Today the National Security Archive is publishing – for the first time in English – the diary of Anatoly S. Chernyaev covering the year 1976, along with edits and a postscript by the author.

Anatoly Chernyaev, the deputy head of the International Department of the Central Committee (and later the senior foreign policy aide to Mikhail Gorbachev), started keeping a systematic diary in 1972, in which he recorded the highlights (and low points) of his work at the International Department, his attendance at Politburo meetings, participation in speech and report writing sessions at state dachas, as well as his philosophical reflections on daily life in the Soviet Union from the point of view of a high-level Soviet apparatchik.

Today, Anatoly Sergeyevich remains a champion of glasnost, sharing his notes, documents and first-hand insights with scholars seeking a view into the inner workings of the Soviet government, the peaceful end of the Cold War and the dissolution of the Soviet Union. In 2004, he donated the originals of his detailed diaries, covering the years 1972 through 1991, to the National Security Archive in order to ensure permanent public access to this record – beyond the reach of political uncertainties in contemporary Russia.

The year 1976 sees a continuation of major themes from previous years, such as relations with fraternal Communist Parties, foreign relations, the state of Soviet economic affairs, and an insider’s view of the functioning of the Soviet government and its leadership. A new theme emerges in 1976 as well – the issue of human rights, brought about by the Helsinki Accords.

The signing of the Helsinki Accords in 1975 did not get much attention in Chernyaev’s 1975 diary. However, in 1976 human rights come to the fore in a powerful way and become a leitmotif in the diary. In January, Chernyaev describes Andropov’s report to the Politburo on the situation with dissidents in the Soviet Union. In May, he writes about the effects of the “campaign” by dissidents: “Our prestige in the eyes of the world public has been struck a terrible blow. It will have long-lasting consequences and it may be nearly impossible to recover. We have lost the biggest ideological battle of the XX century.” In November, a CPSU delegation visiting the Labour Party in Great Britain is met with protesters wherever they go. The experience is eye opening even for Chernyaev’s resolutely ideological boss, Boris Nikolayevich Ponomarev, who realizes the impact human right issues, particularly the right to leave the country for Soviet Jews, is having on the USSR’s image.

The XXV Congress of the CPSU takes place in the early spring of 1976. Chernyaev participated in the drafting of the Congress’ Summary Report at the state dacha in Zavidovo, where he had a chance to observe Leonid Brezhnev in an informal atmosphere. Chernyaev’s views on Brezhnev vary widely throughout the year – from respectful admiration when he observes the General Secretary make sound policy decisions and champion the cause of peace; to frustration when he notices the feebleness of a man in poor health who does not have the physical resources to carry out his duties; to dismay when Chernyaev witnesses again and again the Soviet leader’s growing personality cult. Ultimately, Brezhnev’s evidently sincere commitment to the cause of peace stands out as the defining trait in Chernyaev’s view of the Soviet leader, so much so that in the Postscript to the year, he suggests that Brezhnev probably deserved the Nobel Peace Prize for his contributions to détente.

The European Conference of Communist Parties, which the International Department of the CPSU had been preparing for over two years, took place in East Berlin on June 29-30. Chernyaev’s diary reflects in detail the internal struggles between the CPSU and European Communist parties over the emergence of Eurocommunism, and over the ideological differences, disagreements, and compromises reached during the preparation process. The diary entry on July 9, the first after the conference, in one breath describes the meeting as a “milestone” and a “circus” – a characteristic contradiction for Chernyaev’s observations across the board in 1976.

Throughout the year, Chernyaev periodically writes about daily life in the Soviet Union, outside the bubble of the Soviet political elite. He notices that people are not afraid to express their opinions and art galleries are beginning to exhibit works that had been off-limits for years. Chernyaev’s observations of party intellectuals are sharp and insightful – people like himself, Karen Brutents and Alexander Bovin tied their life to the life of the Party, thus limiting themselves to quiet expressions of discontent and sarcasm inside the protective walls of the Central Committee.

Anatoly Chernyaev’s diary for 1976 witnesses a busy and eventful year, covering momentous events from the XXV Congress of the CPSU to the European Conference of Communist Parties. The diary continues to provide an invaluable first-hand account of the internal workings of the Soviet government, as well as a highly informed intellectual’s view of Soviet culture and society.