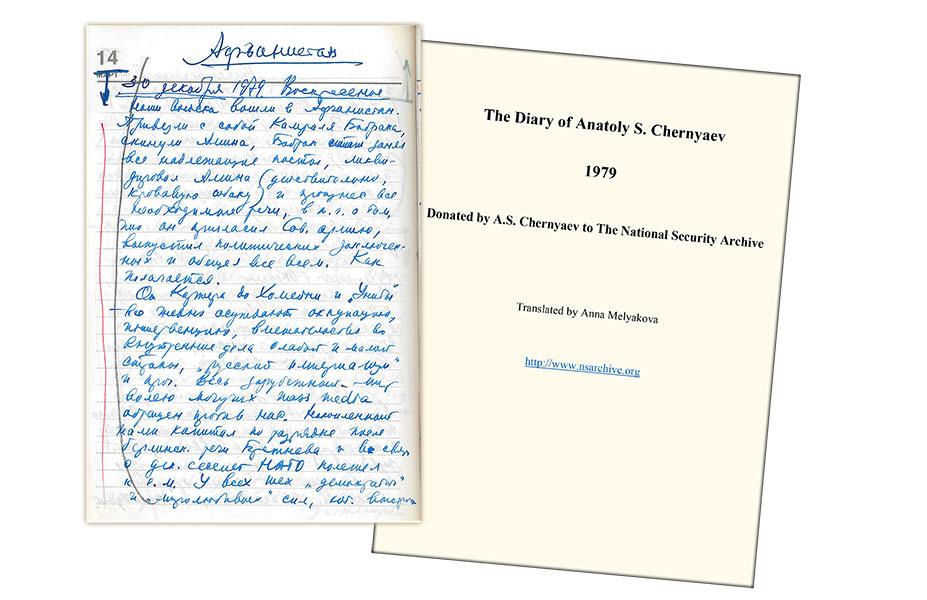 “comrades, we have entered into a period of senility at the ruling top that is very dangerous for our country”

“all Germans share one history, therefore in their minds there is a feeling of impermanence and inconceivability of permanently maintaining this ridiculous construct of West Berlin”

“we have fallen terribly behind capitalism. And there is nothing left to justify this gap” 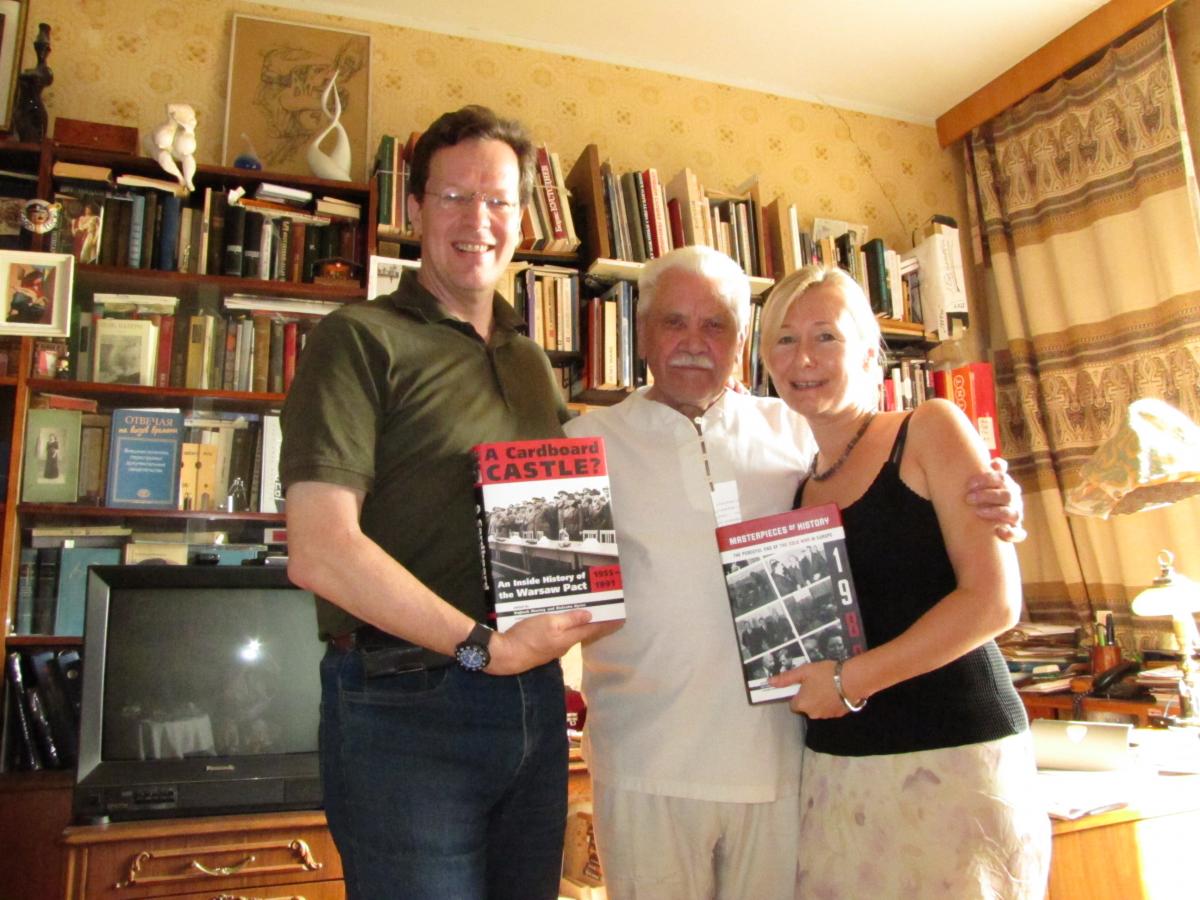 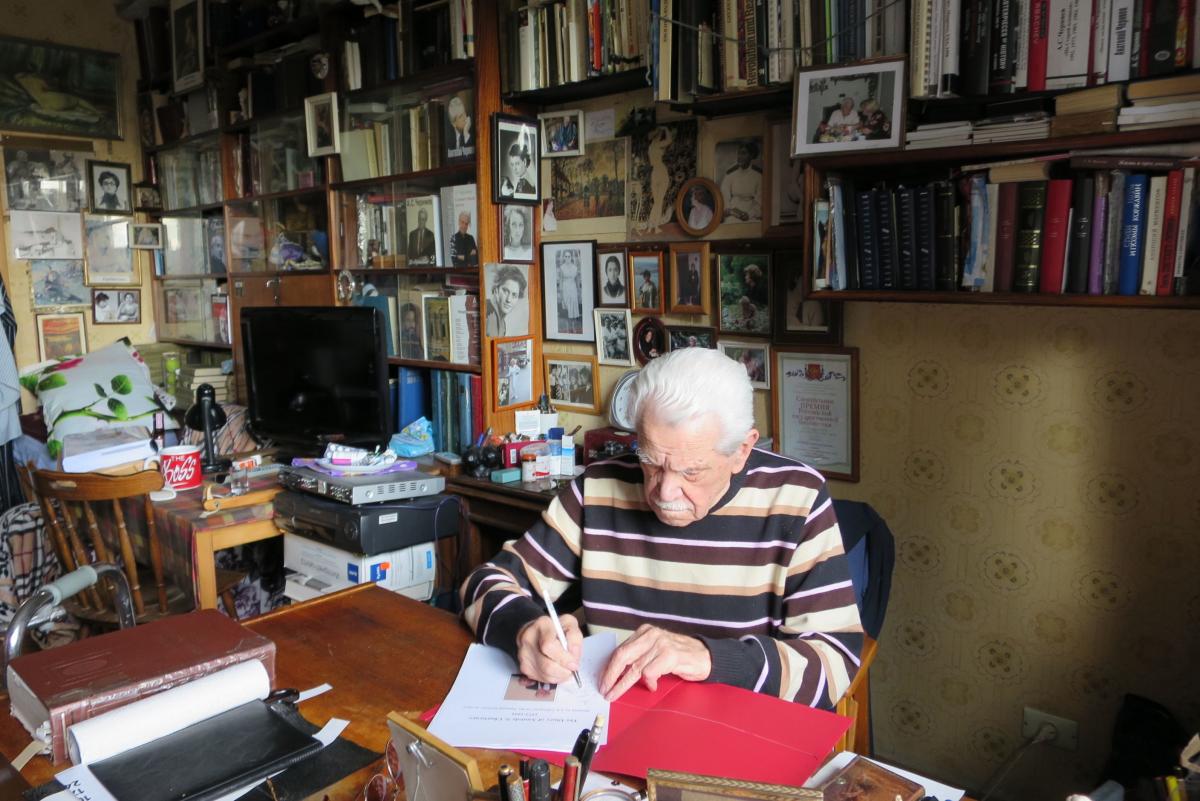 Anatoly Chernyaev at his desk, May 2016, from Svetlana Savranskaya personal archive.

Washington D.C., May 25, 2019 - The National Security Archive marks what would have been Anatoly Sergeyevich Chernyaev’s 98th birthday today with the publication for the first time in English of his extraordinary Diary for 1979, written from inside the Central Committee of the Communist Party of the Soviet Union, where he was then a Deputy Director of the International Department responsible for the International Communist Movement (ICM) and fraternal parties.  The diary traces the further decline of the top Soviet leadership, the widening gap between standards of living in the West and the Soviet Union, and the disastrous decision to invade Afghanistan.

The diary of the late Anatoly Chernyaev, who later became Mikhail Gorbachev’s national security adviser, won accolades from Pulitzer-Prize-winner David Hoffman as “a trove of irreplaceable observations about a turning point in history.” Year after year, the Chernyaev diary takes readers inside the inner sanctum of the Soviet Communist party leadership.

In this installment of the diary, part of the multi-year series published by the National Security Archive, Chernyaev observes the hypocrisy of the Soviet leadership of the international communist movement and the growing split within the movement between Eurocommunists and “orthodox” parties.  He travels widely in the West during 1979 to represent the CPSU at congresses of communist and progressive parties and has ample opportunities to make comparisons and draw conclusions.

Three trips to divided Germany (the GDR, West Berlin and West Germany) inspire his thinking about the “German idea”—“all Germans share one history, therefore in their minds there is a feeling of impermanence and inconceivability of permanently maintaining this ridiculous construct of West Berlin. Whomever you talk to this idea slips through.” In his conversations with West Germans, Chernyaev hears the latent but constant drive toward unification.  He writes about the symbolism of the Berlin Wall: “When you walk through it, in just a few seconds you are transported to a different world, you feel it in your skin.” He comes to a conclusion that the “idea of German unity remains real and vital for our fraternal East Germans,” let alone the population of the FRG.

In U.S.-Soviet relations, détente of the early 1970s is gradually giving way to confrontation and U.S. military buildup, but President Carter and General Secretary Brezhnev still manage to sign the SALT II treaty and seal it with a kiss in Vienna in June 1979.  The signing produces a dilemma for the International Department because the ideological rhetoric has to be toned down. Three days after the signing, Chernyaev observes: “over the last few days the ‘Carter kiss’ (with Brezhnev) happened in Vienna… And we are already in a time crunch preparing Ponomarev’s texts for the Berlin meeting of CC Secretaries. In light of ‘the kiss’ our class approach and unmasking American imperialism does not look very appropriate.”

In connection with arms control and détente, Chernyaev remarks on how the arms race bleeds the Soviet economy and makes a statement that he would practically repeat word by word in January 1986 about the absence of a realistic external threat: “Seriously, does a great nation and great country have to endure such economic shame for so long (and there is no end in sight) so its leader can talk ‘on equal footing’ with Carter?! Nobody believes anymore that anyone wants to attack us, or ‘conquer’ us, or subjugate, defeat, etc. Why, then, do we need this military power, which turned into a terrible obstacle to all our development? The interests of our people are sacrificed to this military power. But at the end of the XX century such glory is ridiculous.”

In 1979, international travel especially allows Chernyaev to make comparisons about the standard of living in the Soviet Union and in the West.  In London, he notes, that “stores are full of wonderful things. Again and again I get frustrated for us, and for myself in particular, because at home, consumer goods are still a social, economic, political, moral-ethical, and neuropsychological problem.”  In West Germany, the comparisons are especially poignant for the Great War veteran: “My main impression, which is still weighing me down: we have fallen terribly behind capitalism. And there is nothing left to justify this gap (at least in America [we can say] ‘blacks are being lynched’), we have no social or economic advantage to show. After all, Germany was also wiped off the face of the earth. Now their salary is 2500-3000 marks (even considering the exchange rate, this is more than 1000 rubles).”  The socialist economic model, weighted down by the burden of the arms race, is losing the global competition in the eyes of one of the most senior representatives of the CPSU.

And yet, Chernyaev still believes in the need to support global socialist movements, and gets completely charmed by the Jamaican socialist Michael Manley during a visit to Jamaica.  In his diary Chernyaev favorably compares Manley to Salvador Allende of Chile and returns to Moscow with a photo of Manley, which he would keep on his desk.

For an International Department official, the biggest event of the year, requiring massive preparations, was the meeting (the sixth) of the Central Committee Secretaries of socialist countries n Berlin. Chernyaev describes the feeling of double-dealing even inside the socialist community, and the dictate of the CPSU, which other parties resented but had no way to resist.  At one of the secret meetings, to which the Romanian representatives were not invited, nobody wanted to speak, even after multiple prodding.  Chernyaev remarks in his diary: “It looked like a silent obstruction. Like a protest on their knees or flipping the finger behind their back.”

There are two “firsts” for Chernyaev in 1979—on July 19 he speaks at the Politburo for the first time, and in September, on the way back from Jamaica, he visits the United States for the first time, spending three days in New York as the guest of the Soviet consulate. In New York he meets the entire Politburo of the U.S. Communist party and gives a well-received presentation.  His treatment by the American Communists shows that they see him, a member of the International Department of the CPSU, as a very important leader.  Hints of this self-importance as a high member of the party apparatus (versus state apparatus) appear several times in the diary.  He criticizes Deputy Foreign Minister Georgy Kornienko, who “dares” to snub the head of the International Department Boris Ponomarev.  He also relates an episode when Alexander Yakovlev, the Soviet Ambassador to Canada, complains to Chernyaev that they don’t want to bring him back to Moscow: “He is languishing, begged me to assist.”

Although Chernayev is generally critical of his boss Ponomarev for his vain ambition and ideological rhetoric, he admires Ponomarev’s staunch anti-Stalinism and describes his conversation with Ponomarev where the latter openly criticized Stalin: “By the way, he knows a great deal about Stalin due to his work on the history of the Party. He knows things that others wouldn’t even think to wonder about. But the hatred he has for Stalin feels partially personal.” Chernyaev worries that “not only do we have reigning incompetence and senile impotence, there is also nostalgia for Stalinist times.”

The final entry of the year is an emotional and also prophetic response to the invasion of Afghanistan.  Chernyaev condemns the invasion in no uncertain terms and wonders: “Who made it happen?”  Interestingly, in addition to the obvious role of the “neighbors” (the KGB), Chernyaev points his finger at Brezhnev’s foreign policy aid Andrey Alexandrov-Agentov, and the importance for Brezhnev’s eventual decision of Afghan Communist leader Amin’s murder of his predecessor Taraki: “The next day after Taraki’s murder, Aleksandrov told Brutents that we should send troops. (Remember, in 1968 he was the first to tell me about it [the Prague invasion] in Zavidovo). Of course, he was one of the ringleaders. With Leonid Ilyich’s current mental and physical state, the influence of this assistant could have been decisive. Especially because L.I. could not forgive Amin for killing Taraki the day after the publication of a large fraternal communique and the Brezhnev-Taraki meeting in Moscow” the previous month.

Chernyaev rejects the security threat-based justification of the invasion and concludes that what led to the decision made by an extremely small group of top leaders without wider consultation even in the Politburo was “just senseless inertial impulses of a decrepit organism that has lost its bearing. These impulses are born in the dark corners of political dysfunction, in an atmosphere of complete atrophy of responsibility that has turned into an organic disease.”

The Diary of Anatoly Chernyaev,1979
Source