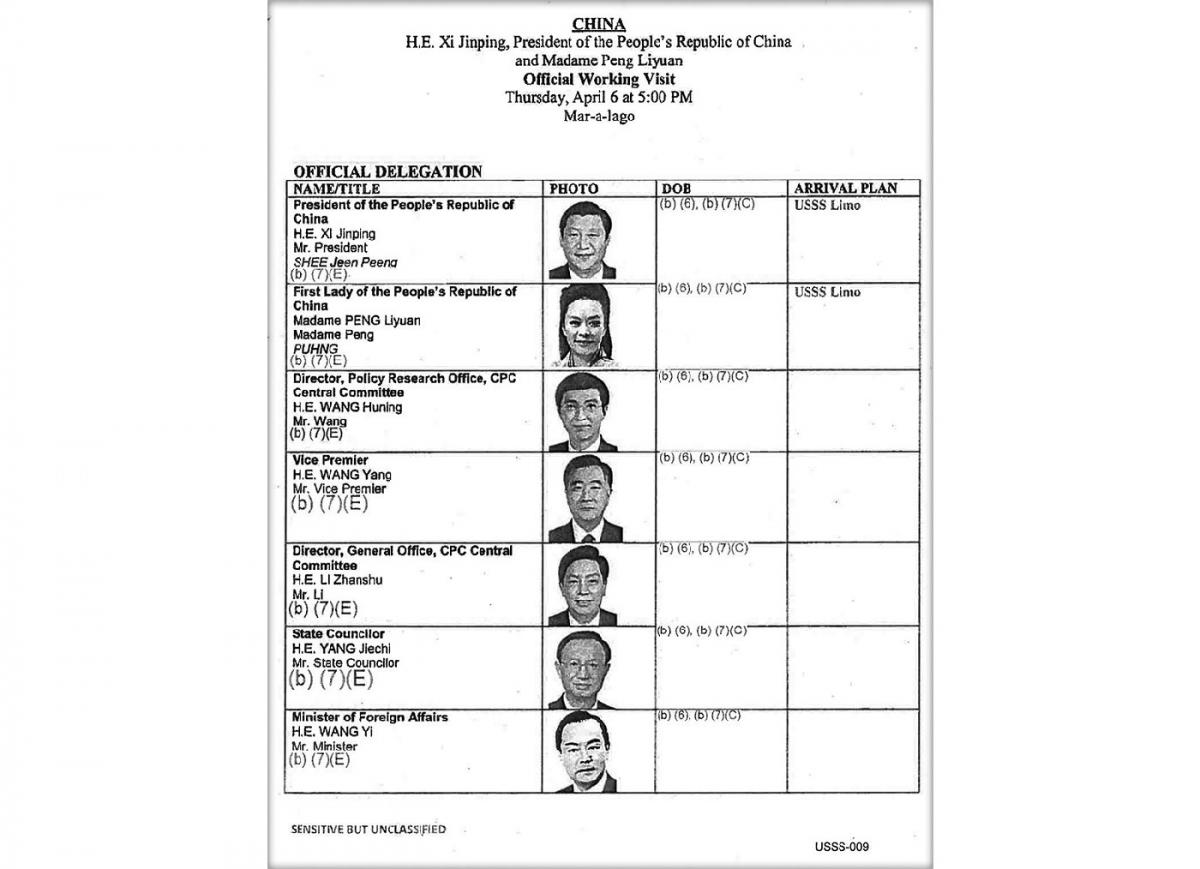 Appeals Court to Hear Trump Visitor Logs Arguments in September: Can President Sweep up Agency Records with a Memo? 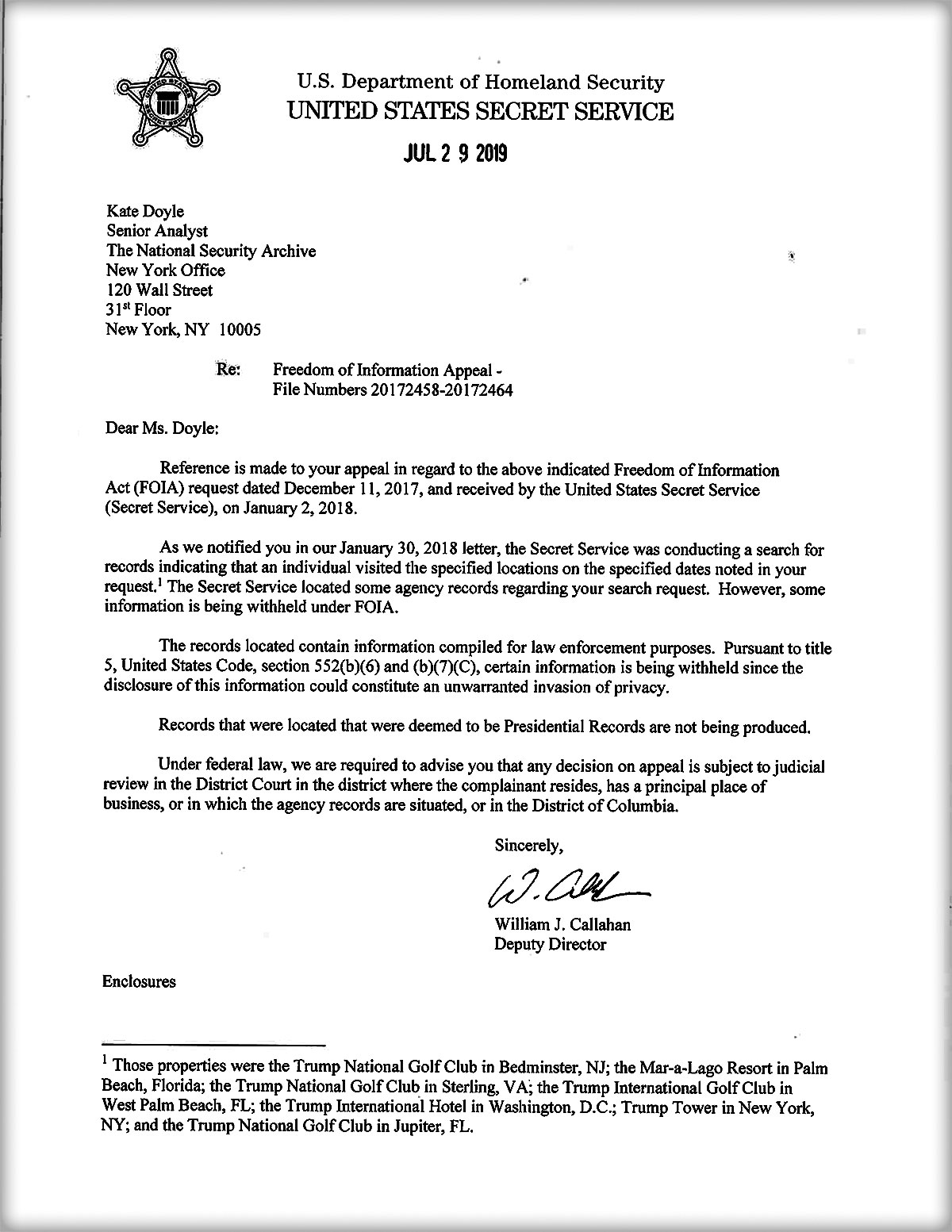 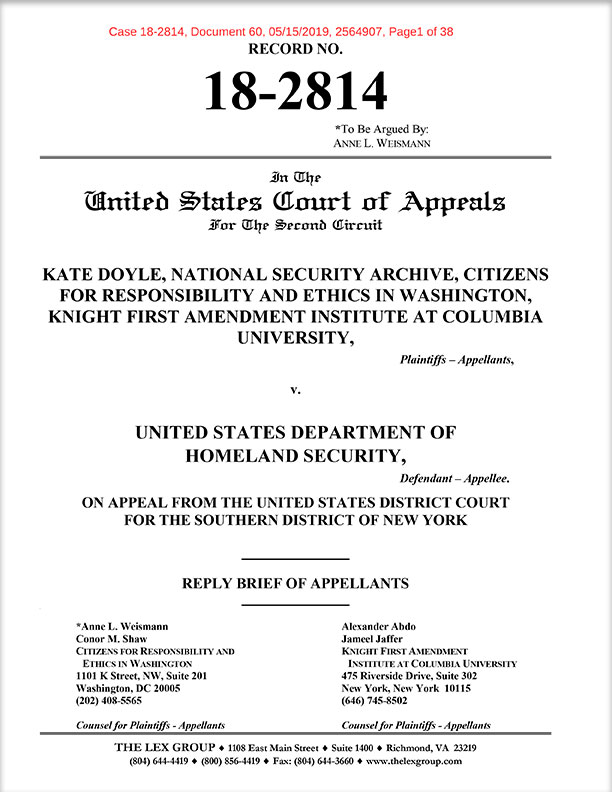 Washington D.C., August 2, 2019 - The Secret Service has just released nearly 150 heavily-redacted pages concerning a Chinese delegation’s visit to President Trump’s winter White House, Mar-a-Lago, in April 2017. The release is a belated response to a Freedom of Information Act appeal submitted by the National Security Archive, together with the Knight First Amendment Institute at Columbia University and the Citizens for Responsibility and Ethics in Washington (CREW), as part of a lawsuit to open the White House visitor logs and the records of presidential visitors to Trump properties, including Mar-a-Lago.

The new release on the Chinese delegation led by President Xi Jinping contains little substance and even redacts Xi’s birthday, which is public information (Wikipedia says his birthday is June 15, 1953).

The release comes a month before the Second Circuit Court of Appeals hears oral arguments in the case, Doyle v. DHS.  The government claims that the records, which were routinely released by the Obama administration with no harm to national security, are presidential records. The Archive, CREW, and Knight argued in court filings that the logs are agency records clearly subject to the FOIA, not presidential records that only become available starting five years after the president leaves office. The appeal challenges the district court decision that effectively let “the Secret Service hide their records of everyone who lobbies the President," according to Archive Director Tom Blanton.

The Secret Service has already admitted during the course of the lawsuit that it maintains no records system for tracking the president's visitors at Mar-a-Lago and other Trump properties, meaning anyone - foreign lobbyists and otherwise - can pay for access to the president without being vetted or recorded.

The only record the government has released prior to this release in response to the Archive’s FOIA suit is one document, totaling two pages, concerning the visit of Japanese Prime Minister Shinzo Abe to Mar-a-Lago in February and March 2017 - this after United States Attorney Sarah S. Normand told Judge Failla and the plaintiffs that DHS would produce all the visitor logs, of which the DOJ said there was a “substantial” amount “numbering in the hundreds.”

The plaintiffs, led by Archive Senior analyst Kate Doyle, argue that White House visitor logs are created and managed by the Secret Service as part of its statutory duties as an agency, and that the President should not be able to convert agency records into “presidential” ones – thus hiding them from FOIA while he’s in office – by simply issuing a memorandum of understanding.