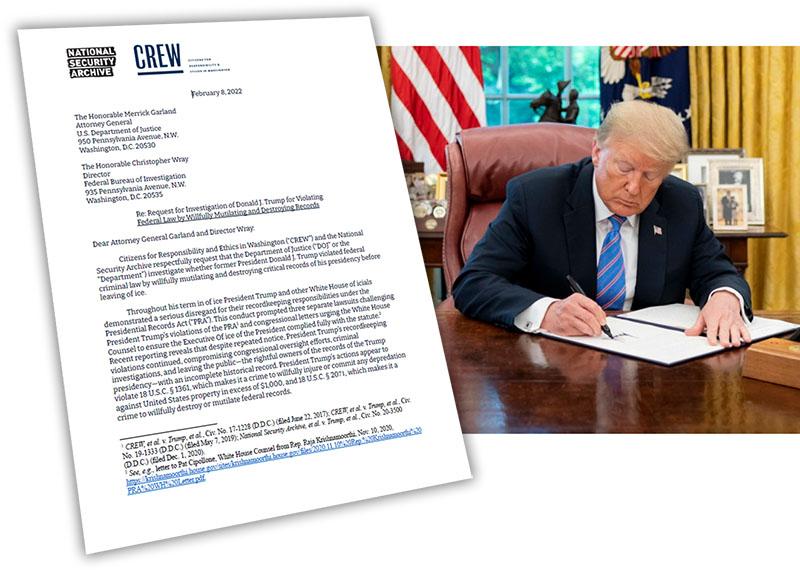 A Conviction Could Disqualify Former President from Holding Public Office

The Weird Law Prosecutors Could Use to Bar Trump From the White House
By Jose Pagliery and Asawin Suebsaeng, Daily Beast
Feb 10, 2022

Opinion: Documents weren’t the only things Trump tore up while in office
By Editorial Board, The Washington Post
Feb 9, 2022

Washington, D.C., February 9, 2022 – The National Security Archive and Citizens for Responsibility and Ethics in Washington (CREW) have formally requested that the Justice Department and FBI investigate former President Donald Trump’s mutilation and destruction of presidential records as possible violations of federal criminal law. The groups argue that Trump’s widely reported tearing up, disposal, and removal of highest-level documentation not only flouted his obligations under the law, but have deprived the public of its rightful ownership of those materials under the Presidential Records Act (PRA) and undermined congressional efforts to hold his administration accountable for events such as the January 6 insurrection.

A conviction in such a case would set a powerful precedent for accountability in preserving the historical record – something the PRA has failed to do – and could have important additional consequences, for example preventing the former president from ever holding public office again.

Former President Trump’s destruction and removal of records may violate 18 U.S.C. § 1361, which makes it a crime to willfully injure or commit any depredation against United States property in excess of $1,000. Another statute, 18 U.S.C. § 2071, which makes it a crime to willfully destroy or mutilate federal records, arguably goes further. The statute states, “Whoever, having the custody of any such record, proceeding, map, book, document, paper, or other thing, willfully and unlawfully conceals, removes, mutilates, obliterates, falsifies, or destroys the same, shall be fined under this title or imprisoned not more than three years, or both; and shall forfeit his office and be disqualified from holding any office under the United States.” (emphasis added)

In their letter sent to Attorney General Merrick Garland and FBI Director Christopher Wray, the National Security Archive and CREW lay out the basis for an investigation, which they argue is particularly necessary after private lawsuits to enforce the PRA have notably failed to have any meaningful impact as a restraint against malfeasance in the area of historical preservation. The numerous offenses committed by the former president *that we know of* include:

The White House under President Trump was repeatedly put on notice about the offenses.  News reports indicate that at least two of the president's chiefs of staff advised him of his obligations. Among other steps, CREW and the Archive each wrote to White House Counsel Pat Cipollone requesting that he remind all White House staff of their recordkeeping requirements and provide written assurances that no White House official would destroy presidential records. The White House never responded to either letter, and records turned over to the Select Committee to Investigate the January 6th Attack on the United States Capitol included documents that had been torn-up.

The National Security Archive and CREW filed lawsuits in 2019-2020 against the Trump administration to try to enforce recordkeeping requirements. These suits include:

This won, on October 4, an order from U.S. District Judge Amy Berman Jackson to the White House to preserve all records relating to meetings and phone calls with foreign leaders, as well as all records on White House practices and policies for creating and keeping such records.

But Trump continued to flout the PRA. On February 7, 2022, the Washington Post reported that NARA officials had retrieved 15 boxes worth of presidential records from Mar-a-Lago, records that should have been transferred to the Archivist of the United States (AOTUS) well over a year ago. The egregious violation evidently prompted NARA to ask the Justice Department to conduct an investigation into Trump's handling of his records while in office.  Meanwhile, Sen. Gary C. Peters (D-Mich.), chair of the Committee on Homeland Security and Governmental Affairs, has signaled he plans to hold hearings on the matter.

Where lawsuits to enforce the PRA failed to convince the Trump administration of the gravity of violating the records law, a pair of other statutes concerning destruction of federal property may succeed. “Violating the Presidential Records Act seems to bring no sanctions, as we found in multiple lawsuits trying to save White House records,” said National Security Archive Director Tom Blanton. “But the laws protecting government property and records from mutilation could disqualify former President Trump from ever holding public office again.”

The stakes for the public are extraordinarily high and the grounds for exploring a criminal inquiry are clear. Unimpeded access to the activities of any presidential administration is indispensable for historical, policy, and national security reasons. Furthermore, in the present case the disclosure of recorded evidence, investigative reporting, and congressional inquiries over the past year have shown that Trump played an active role in trying to overturn the 2020 presidential election. The best way to ensure that the Executive Office of the President is held accountable and that another chief executive cannot engage in potentially dangerous behavior is to have a full public record of his or her actions.

Re: Request for Investigation of Donald J. Trump for Violating Federal Law by Willfully Mutilating and Destroying Records